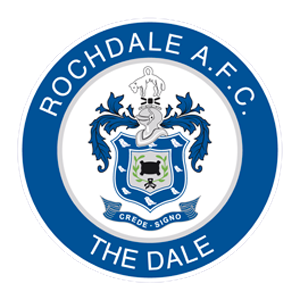 Lineup will be displayed here shortly before the game

MORECAMBE suffered defeat in their final pre season game of the campaign but produced enough moments of quality to give Jim Bentley and fans encouragement.

A goal from Steven Davies was enough to give Keith Hill’s side victory with the Shrimps unable to make the most of a hatful of second half chances that they created.

The visitors started brightly and Dan Nizic was forced into a neat double save after just five minutes. Ollie Rathbone produced a stinging shot that the keeper parried before reacting sharply to prevent the Dale attacker from reaching the loose ball.

Two minutes later Callum Camps drove a low effort wide of the right hand post before the Shrimps threatened themselves with skipper Michael Rose breaking through but seeing his square ball for Aaron Wildig cut out.

The game then became something of a midfield battle with chances at a premium despite some neat football from both sides.

Rochdale began the second half strongly after bringing on Calvin Andrew down the right hand side and they took the lead on 52 minutes through Steven Davies. Ollie Rathbone clipped in a cross from the left and Davies did well to volley the ball from behind him and turn it past Nizic on the volley from six yards out.

Morecambe raised their game after the hour mark and Dale keeper Josh Lillis made two stunning saves to keep them out.

His first came from Wildig who had been played on goal by a poor backpass and his second a minute later when Rhys Turner produced some superb skill to work an opening and force the keeper into another fine save with Wildig’s follow up cleared off the line.

The Shrimps continued to threaten and they were unlucky again three minutes from time when Adam Campbell played in Garry Thompson and although his shot beat Lillis the ball hit the inside the of the right hand post and rebounded ton safety.

In the final minute Turner once again showed some superb skills to give him a clear opening but he skewed his final shot wide when he looked sure to score as the Shrimps somehow failed to find the target and were left to reflect on what might have been.