Derek Adams has named his side to face Mansfield Town at the One Call Stadium this afternoon.

A first-half goal from Jordan Bowery was enough to see the Shrimps fall to defeat at Mansfield.

Bowery scored five minutes from the break when he got ahead of his marker at the near post to volley home Stephen Quinn’s left wing cross and earn the Stags the points in a lacklustre game.

After the highs of the thrilling injury time win over Salford in midweek the Shrimps never really got going in a frustrating game that was low in drama and quality on a difficult surface.

Mansfield started the brighter of the two sides, with Jordan Bowery curling an effort goal-bound after three minutes. Morecambe keeper Kyle Letheren parried the effort wide and Jamie Reid’s follow-up was blazed over the bar.

Mansfield went close again on 11 minutes when Mal Benning's free-kick from the edge of the box took a deflection off the Morecambe wall but fell neatly for Letheren, who was able to make the save.

The Stags maintained their pressure with a string of corners with the closest they came to a goal coming from an Ollie Clarke header that went wide of the post.

Morecambe grew into the half with Toumani Diagouraga and Carlos Mendes Gomes both seeing shots blocked before Mansfield broke the deadlock five minutes before the break.

Veteran midfielder Stephen Quinn picked up the ball on the left hand side of the box and fired a low cross into the near post which Bowery poked past Letheren from six yards out.

As the half-time whistle loomed, Mansfield pushed for a second. Jason Law reached the byline and dragged the ball into Quinn’s feet, yet his shot from 15 yards sailed over.

Morecambe looked better after the break with substitute Stephen Hendrie putting in some good crosses without any clear chances being created until the final stages of the game.

A Hendrie cross three minutes from time was crying out for a Morecambe touch before the best Shrimps chance came on 92 minutes when Mendes Gomes presented A-Jay Leitch-Smith with a great opportunity with a smart ball over the top but the Shrimps striker couldn't connect with the ball as it dropped over his shoulder and any hopes of a comeback ended. 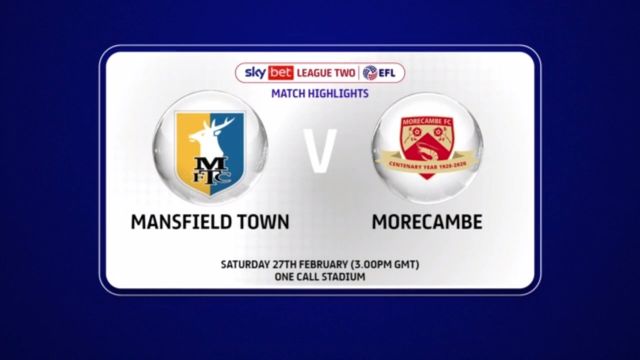