The Shrimps travel to Priestfield Stadium on Saturday to face Steve Evans’ Gillingham in Sky Bet League One.

Stephen Robinson’s side head into the fixture on the back of their first defeat of the season, a narrow 1-0 defeat at home to Rotherham United on Tuesday night.

The two sides have played each other a total of eight times between 2008 and 2013, with all meetings coming in Sky Bet League Two. The hosts have won half of the previous meetings, with Morecambe winning one and drawing the remaining three.

Despite defeat in the last outing, Robinson’s men will still boast a great deal of confidence on the back of a strong start to the season both in the league and in the Carabao Cup.

Out of Gillingham’s opening four games in all competitions, Evans’ men have drawn two in the league, both 1-1 against Lincoln City and AFC Wimbledon respectively, lost away to Plymouth Argyle by a goal to nil and beat Crawley Town on penalties in Round One of the Carabao Cup.

In 2020/21, the Gills finished a respectable 10th place in Sky Bet League One on 67 points, missing out on the play-off spots by seven points.

Since taking the Priestfield Stadium hotseat, manager Evans has taken charge of 102 matches in 810 days, winning 39 games, drawing 28 and losing 35, averaging at 1.42 points-per-match.

Gills' boss Steve Evans said his side can expect a tough afternoon against the Shrimps.

Speaking to the official club website, he said: "It will be tough tomorrow.

“The first thing you have to have is respect for all opponents. Morecambe will be organised and disciplined.

“There are certain benchmarks you look for. We need to get three points, but it will be difficult.

Club captain Kyle Dempsey was named Player of the Year for the 2020/21 campaign after scoring eight goals in 44 appearances from midfield. The 25-year-old started his career at Carlisle and went on to make spells at Huddersfield, Fleetwood and Peterborough before joining the Gills last summer.

21-year-old Jack Tucker was named the club’s 2020/21 Young Player of the Year for the second season in a row. The Kent-born defender came through the ranks at the Priestfield Stadium before breaking into the first team in 2019/20 and generating interest from other clubs.

Midfielder Ben Reeves joined the club in the summer after being released by Plymouth Argyle. The 29-year-old made 32 appearances in all competitions last season, scoring two goals in the process. As well as earning a number of promotions in his career, Reeves has also been capped twice for Northern Ireland in 2014/15, against Greece and Scotland respectively.

Speaking ahead of Morecambe’s second Sky Bet League One fixture on the road, first-team coach Diarmuid O’Carroll said he expects a tough afternoon against the Gills.

“Gillingham are proven, they know what they’re all about, they’re very, very difficult to play against.

“They’re a very physical side, they’re bought into their way of playing, their style of play, it’s a tough place to go.”

The man in the middle for the fixture is West Yorkshire-based man Tom Nield. Ryan Whitaker and Marc Wilson will run the lines and Andrew Aylott has been named as fourth official.

Nield took charge of 32 games last season, including Morecambe’s 1-1 draw at home to Stevenage on 14 November. Throughout those games, he issued a total of 109 yellow cards and three red cards.

As well as refereeing many games in Sky Bet League’s One and Two, Nield has also been battling coronavirus for the NHS as a senior nurse/matron during the pandemic.

Gillingham ran out 2-1 winners on home soil after goals from Mustapha Carayol and Vadaine Oliver either side of Cole Stockton's strike saw them hold on to claim their first win of the season.

Carayol's opener came after five minutes where his strike beat Jokull Andresson from distance, before Stockton took on the entirety of the Gills defence before firing home.

The winner came deep into the second half as Oliver sent his penalty straight down the middle of the goal after Danny Lloyd was fouled in the Shrimps box.

It was a quick start from the hosts and they could have opened the scoring on the second minute of the game.

Full-back Ryan Jackson advanced down the right-hand side breathing Greg Leigh in a 50/50 before drilling the ball across the floor looking for a touch, it was Carayol who was first to the ball, touching it just wide of Andresson’s left-post.

A quick-free kick from Kyle Demspey saw him tee the ball up for Carayol 25-yards, who unleashed a right-footed rocket that gave Andresson absolutely no chance in the Shrimps goal.

With plenty of time left on the clock, Stephen Robison’s men set about finding a way into this one.

Four minutes before the half-hour mark, we were level.

A fizzed ball into the path of Stockton by Leigh was picked up by the big man who went about pulling Morecambe back level, and that’s exactly what he did.

In the same style he when he netted the opener against Ipswich Town in the first game of the season, the Shrimps number nine ran through the Gills defence before firing across goal into the bottom left-corner of Cumming’s goal.

The rest of the first-half was a midfield battle with neither side testing each respective goalkeeper.

It was the substitute who had the first meaningful effort of the second period, his dancing feet saw him advance into the box but his effort was well over Cumming’s goal.

The visitors continued on their assault of the home side’s goal with Stockton next to try his luck.

Similar to the goal that saw Morecambe equalise, Stockton with his back to goal held up the ball before spinning defender Jack Tucker, but it was not the same outcome on this occasion unfortunately, with the strikers effort going just wide.

On the 78th minute the game changed again, after a long-throw into the box found the feet of Danny Lloyd, he was adjudged to have been fouled from behind by referee Tom Nield, in turn handing the home side to potentially take the initiative from the spot.

Oliver stepped up and his spot-kick went straight down the middle beating Andresson who had dived to his left in the Morecambe goal.

We are back on home soil on Tuesday evening as we host Sky Bet Championship side Preston North End in Round Two of the Carabao Cup.

Tickets are now available to purchase for the away visit to Gillingham Football Club.

PLEASE NOTE: This is an ALL TICKET fixture for away fans so tickets must be purchased from Morecambe. Tickets are on sale until 5pm on Thursday 19 August.

Prices are as follows:

Tickets can be purchased from the Club Shop in person next week, open Monday to Thursday 10am-5pm (We are open until 10pm on Tuesday 17 August, closed during the match). 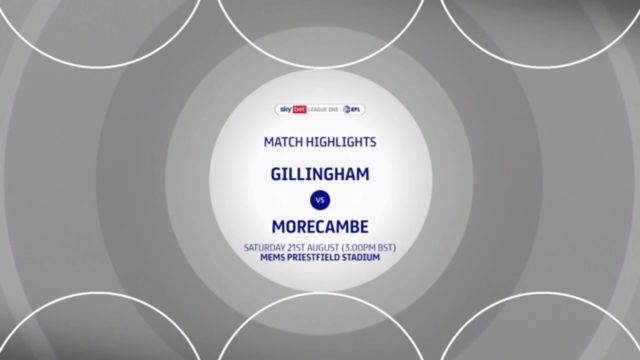 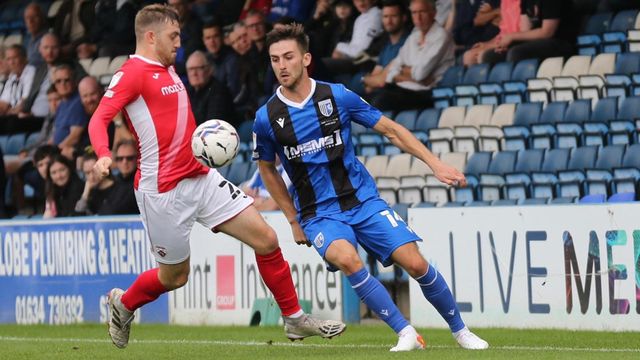