Stephen Robinson’s side welcome Rotherham United to the Mazuma Stadium for our first Tuesday night game of the campaign.

The Shrimps, whose last competitive Tuesday night home fixture under the lights came on 11 February 2020, head into the game on the back of an excellent 2-0 win over Shrewsbury Town.

The two sides have played each other a total of 15 times between 1979 and 2016, the first two of those clashes falling in the FA Cup with the remaining 13 coming in Sky Bet League Two. Of those 15 meetings, The Shrimps have won five, drawn four and lost six.

Robinson’s men approach the game with plenty of confidence following a draw and a win in the opening two games. In addition, striker Cole Stockton currently sits at the top of the leading scorers table with three goals in two league games. The 27-year-old has a current goal conversion rate of 60% and a shot accuracy of 80%.

After their relegation from the Sky Bet Championship last season, the Millers have had mixed fortunes thus far in the 2021/22 campaign.

Since winning their opening game of the season 2-0 at home to Plymouth Argyle at the AESSEAL New York Stadium, Paul Warne’s side went on to lose to Accrington Stanley in Round One of the Carabao Cup before losing away to Wigan Athletic in the league by a goal-to-nil.

In the 204 matches managed since taking over, Warne, who was also assistant manager for the Yorkshire side for a number of years, has won 72, drawn 44 and lost 88, averaging out at 1.27 points-per-match.

Rotherham boss Warne, who faced the Shrimps once as a player for the Millers in a 0-0 draw in September 2009, has heaped the praise on Morecambe ahead of Tuesday night’s clash.

Speaking to their official website, he said: "I'm surprised - and I know that sounds like a very insulting thing to say, I don't mean it that way.

"They had a really hard start and have done amazingly well.

"They have pulled a team together and got some really good experience in there as well.

"There are two players that I have been linked to sign in the past with Greg Leigh and Toumani Diagouraga.

I've always really liked the latter as a midfielder.

"I think Stockton has done really well and they're a real physical force.

"I think they have had the shock result of the season so far, when they were leading at Ipswich and then ended up drawing.

"I have watched that game and they performed really well. Then they did well at Blackburn and beat a brand new Shrewsbury side, who have invested well in the summer.

"I think they have been the surprise package of the league as we speak.

"In pre-season, everyone was talking about the like of Ipswich and Sunderland as always,

and Morecambe have arguably had the best start out of all the clubs from what people expected.

"Fair play to them, there's no reason why they can't continue."

In what proved a difficult 2020/21 campaign for the Millers, striker Michael Smith won the illustrious Player of the Year award. The former Charlton and Barnsley man also picked up the leading scorer award after netting 10 times in 46 appearances in all competitions. The 29-year-old, who stands at 6ft 4, began his career with Darlington and has gone on to become a reliable scorer, having bagged his 100th career goal in March against Bristol City.

One of Rotherham’s summer arrivals is Northern Ireland international Shane Ferguson. Having accumulated a total of 49 appearances for his country, and 308 career appearances at club level, the 30-year-old undoubtedly provides his new side with a wealth of experience, especially considering he has also played in the Premier League and Europa League respectively. The left-midfielder has found the net 14 times in his career to-date and assisted a total of 39 goals, proving himself as an important asset to the Millers.

Another important man for Rotherham is striker Freddie Ladapo, who joined the club in July 2019 after an impressive return of 19 goals in 49 appearances for the Pilgrims. The 28-year-old spent his youth career between Southend United and Colchester United before going on to play for such clubs as Crystal Palace, Oldham Athletic and Shrewsbury Town. The 6ft 2 man has a total of 203 career appearances to-date, 42 of which came in the Championship, scoring 55 times and providing 10 assists.

Speaking after Morecambe’s impressive 2-0 win at home to Shrewsbury Town, Shrimps’ boss Robinson says he is expecting a tough game against the South Yorkshire outfit. 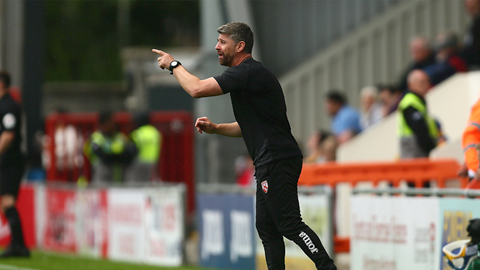 “We have to do that to allow us to play our football, our performance in the second-half [vs Shrewsbury] shows that we take the game to people, we are a very good side, but we have to start well and match their physicality.”

Webb has taken charge of two Championship games so far this campaign, both of which saw the referee issue six cards in each tie.

Having represented the PGMOL at the Dallas Cup in 2009, Webb went on to referee the League Two Play-Off Final between Coventry City and Exeter City at Wembley Stadium in 2018.

Morecambe 0-1 Rotherham United
Tuesday 17 August 2021
The Mazuma Stadium
Sky Bet League One
Attendance: 4,004 (640 away)
The Shrimps suffered their first defeat of the season after a wonder strike from Rotherham's Michael Smith on the hour gave the Millers a narrow win.
Morecambe boss Stephen Robinson made two changes from the side that beat Shrewsbury 2-0 at the weekend with Kelvin Mellor and Alfie McCalmont recalled to the side in place of Greg Leigh and Adam Phillips.

The visitors started the game well with centre forward Smith looking a constant threat and forcing Anthony O'Connor into a superb early block.

The Shrimps then grew into the game and began to cause the Millers some problems of their own.

Arthur Gnahoua went close to an opener on 20 minutes with a shot on the turn that curled inches wide of the left hand post, before Josh McPake was denied a shot on goal by an excellent covering tackle from Michael Ihiekwe.

Rotherham ended the half on the front foot with Smith forcing Jokull Andresson into an excellent save at his near post with a right foot snapshot before the same player was denied again by the Morecambe keeper with an effort from the edge of the box after an excellent first touch.

Half-time: Morecambe 0-0 Rotherham United
Smith was not to be denied on the hour however as he fired Rotherham ahead with a stunning 40-yard-strike. Receiving the ball just inside the Morecambe half he turned sharply and produced a stunning, dipping effort to beat Andresson.

Morecambe hit back with McCalmont drilling a low shot just passed the right hand post from the edge of the area.

Stephen Robinson brought on Wes McDonald and Shayon Harrison as the Shrimps look to force the pace in the later stages of the game as the visitors put bodies behind the ball.
McCalmont saw a shot blocked and McDonald blazed an effort well over from the left hand side of the box.

Tickets for our Sky Bet League One match against South Yorkshire outfit Rotherham United are now on sale.

Tickets are available in the Bartercard Stand and MGS Terrace. 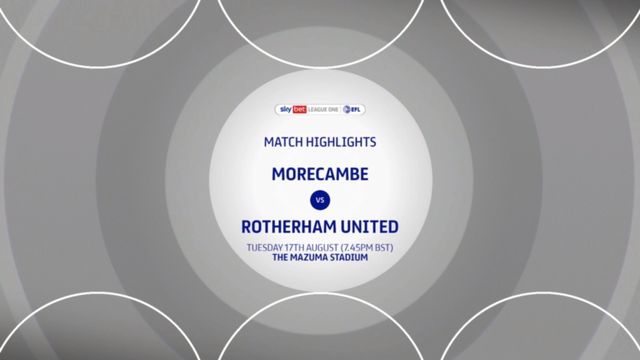 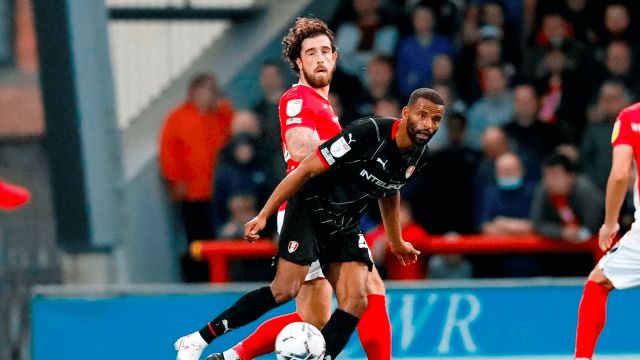