The Shrimps host Shrewsbury Town in what is the club’s first ever home game in Sky Bet League One.

The first League One game at home kicks off on Saturday 14 August as Steve Cotterill’s Shrews make the journey north from Shropshire to west Lancashire to face Stephen Robinson’s Shrimps at the Mazuma Stadium.

The hosts go into the tie on the back of a famous Carabao Cup victory away at Blackburn Rovers on Tuesday night, which will give Robinson’s men ample confidence and rightfully so.

The two sides have faced eac other 14 times in the past, with Morecambe winning four, drawing three and losing seven. The first of those clashes, in October 2002, came in the LDV Vans Trophy, 12 of the meetings came in League Two and the most recent fixture came in 2017/18 FA Cup.

Below is everything supporters need to know ahead of the visit of Shrewsbury.

Cotterill’s men finished 17th in League One last season, winning 13, drawing 15 and losing 18 of the 46 games played. The Shrews’ boss was absent for a large portion of the season due to COVID-19 related issues, so everyone at Morecambe Football Club is delighted at his recovery and look forward to welcoming Steve to the Mazuma Stadium.

In terms of the two games played so far this season, the Shropshire outfit fell to an opening day defeat at home to Burton Albion before triumphing over fellow League One side, Lincoln City in Round One of the Carabao Cup, which saw the tie go all the way to penalties to decide the outcome.

With Cotterill back in the dugout where he belongs, former Bristol City and MK Dons forward Wilbraham is relishing a tough test against the Shrimps.

“They’ve had a couple of good results what they’ve started off with,” Wilbraham said.

“We need to go there and start better than we have done the last two games to be honest and we need to be on the front foot and be ready to start the game well because they will come at us.

“They did well last season, they’ve started the season well so we have to be on our guard against them.”

Shrewsbury’s leading goal scorer last season was Shaun Whalley, a 34-year-old right-winger who is going into his seventh season with the New Meadow side after joining on a free in July 2015 following release from Luton Town. The prolific talisman, who netted eight times last campaign as well as leading the assists table, started his youth career with Norwich City before enjoying successful spells with the likes of Accrington Stanley and Wrexham.

Summer signing Matthew Pennington arrived on a free after being released by Premier League side Everton. The 26-year-old centre-back, who spent eight years at the Goodison Park club, spent most of his Merseyside spell out on loan, and has accumulated experience with the teams such as Leeds United, Ipswich Town and Hull City. The Warrington-born man was also capped for England at U19 level in 2013. With over 207 career appearances to-date, including seven in the Premier League, the Shrews will be looking to rely on Pennington’s experience throughout the season.

Another pre-season arrival is right-midfielder Elliott Bennett from Blackburn Rovers. The former Jamaican international is another recruit with plenty of experience, having played a total of 491 games so far in his career, scoring 35 goals in the process. In addition, the former Wolverhampton Wanderers, Brighton and Hove Albion, and Norwich man boasts 78 career assists to-date, meaning he’ll always pose a threat against any opposition.

Morecambe manager Stephen Robinson has enjoyed a strong start to the campaign, narrowly missing out on an opening day victory at Ipswich Town before a shock victory over Sky Bet Championship side Blackburn Rovers in Round One of the Carabao Cup.

Whilst the 46-year-old is looking forward to having fans back at the stadium for a league game, he is hoping for a repeat performance of Tuesday night’s second half at Ewood Park.

“A point at Ipswich was brilliant, it should’ve been three,” said the Shrimps’ chief.

“We have to follow that up with a performance and the result usually follows the performance and if we can get anywhere near the second half at Blackburn, then we’ll do okay on Saturday.

“You see the buzz around the town, we took 1,000 fans to Blackburn and 700 to Ipswich so the momentum is growing in the town, there’s a real feel good factor about the place and we have to continue that.”

Nottinghamshire-based Declan Bourne will be the man in the middle at the Mazuma Stadium on Saturday, with Conor Brown and Peter Gooch running the lines and Kevin Mulraine taking the position of fourth official.

Bourne, who refereed the Shrimps last campaign in our 3-1 victory at home to Grimsby Town as well as our 4-1 triumph over Scunthorpe United, took charge of 30 games last season, issuing 86 yellow cards and two red.

His first game of the current season came on Tuesday night at St Andrews as Birmingham City overcame Sky Bet League Two opposition Colchester United by a goal to nil in Round One of the Carabao Cup.

Joining host Dave Salmon and club media assistant Matt Smith on the press deck for the Shrimps’ first home game of the Sky Bet League One campaign is summer signing Jon Obika, audio passes are available from as little as £2.50 per match, £4.49 for a monthly pass or £45 for a season pass.

Two first-half goals from Adam Phillips and Cole Stockton respectively gave the Shrimps all three points over Shrewsbury Town at the Mazuma Stadium.

Phillips found the back of the net once again, following up his midweek penalty against Blackburn Rovers with one against the Salop, before Stockton netted his fourth goal of the season and third in Sky Bet League One, as he poked home from a corner.

Inside the opening minute it was the Shrimps who were on the offensive, after some superb play from Stockton saw him evade two Salop defenders before setting Arthur Gnahoua on the right-hand side, his lay-back found the advancing Ryan Cooney, but the full-back’s effort was just wide off the target.

In what turned out to be a pretty quiet fist-half, luckily things did pick up 10 minutes from the break.

A clipped ball over the top from Toumani Diagouraga found Phillips inside the box, Nathaniel Ogbeta found himself the wrong side of the ball and bundled over the Shrimps midfielder in the box.

Up-stepped the confident Phillips, who after notching against Blackburn Rovers in midweek was at it again. Picking himself off the tuft to send Marko Marosi in the Shrewsbury goal the wrong way and in turn, giving the home side the advantage.

Moments later, the home side celebrating again, a corner from first goal-scorer Phillips took a deflection, landing perfectly into the path of Stockton, who fired home.

The visitors made the first change of the game, looking to get back into this one as Sam Cosgrove replaced the sluggish Ogbeta.

On the 55th minute, the Salop should have clawed a goal back, an Elliott Bennett corner was met by the head of Pierre who was up from the back, however the central-defender could not take advantage of the space he was left in the penalty area.

After that brief attacking spell from the visitors, the hosts were at it again.

Some fantastic work from Gnahoua saw him lay the ball back to Rangers loans Joshua McPake, who took one touch to set himself before forcing a good save from Marosi in the Salop goal.

It was one-way traffic after that, goalscorer Stockton wanted more blood and came close to adding a second just after the hour mark.

His dancing feet from Ipswich on the opening day was there for all to see once again as he worked himself some space to unleash an effort from just inside the box.

Unfortunately for him, it was another good save from the visiting goalkeeper.

The final chance of the game fell to the visitors, another corner from Steve Cotterill’s side was met by the head of Pierre, but once again it came to no avail.

A superb result for Robinson’s men who build on their opening day point against Ipswich Town, with three points against the Salop.

We are back on home soil on Tuesday night, as we welcome Rotherham United to the Mazuma Stadium.

Tickets are now on sale for our first home game of the new Sky Bet League One season against Shrewsbury Town.

Tickets are available in the Bartercard Stand and MGS Terrace, there are a limited number of seated tickets available within Block E. 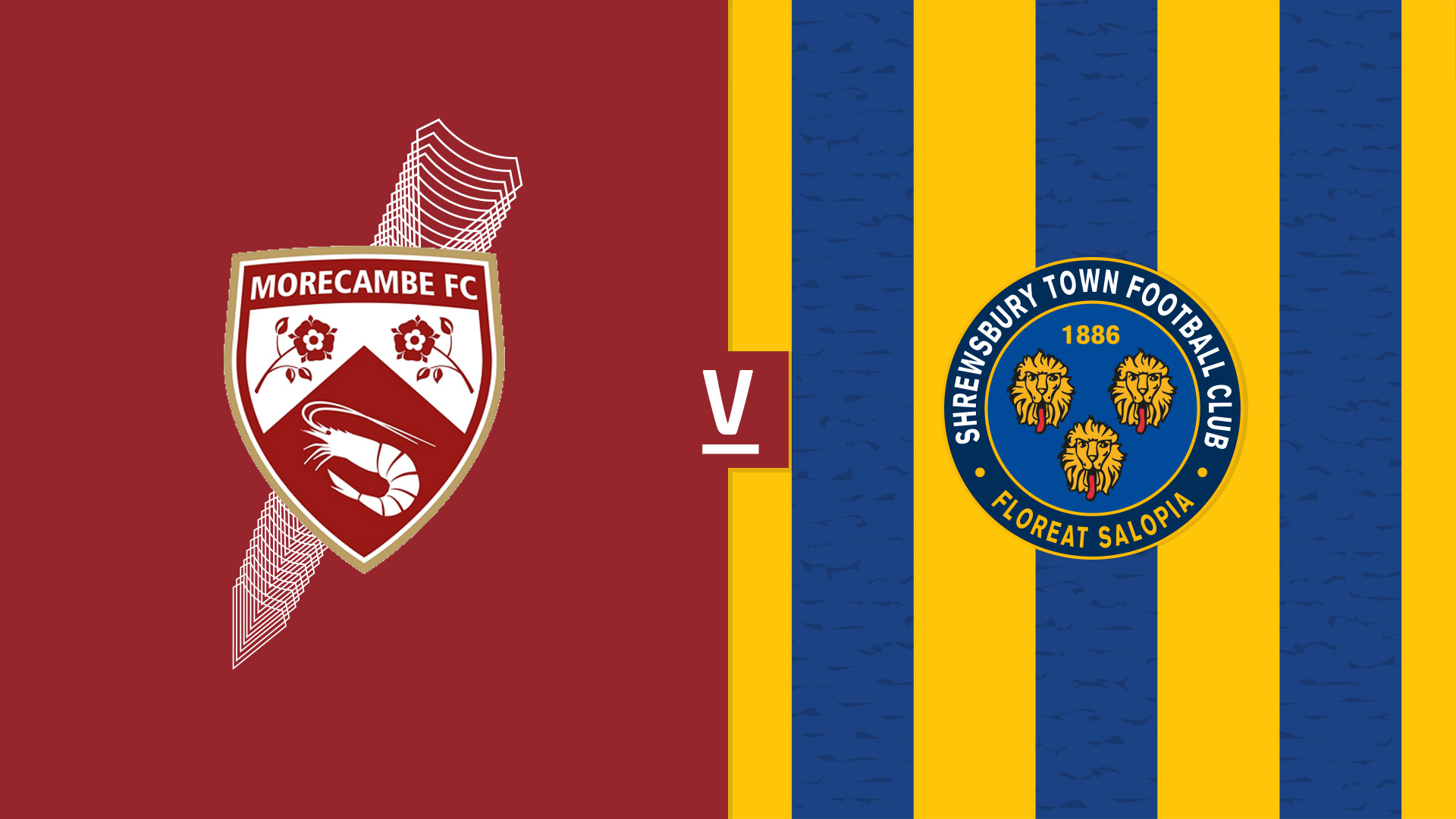 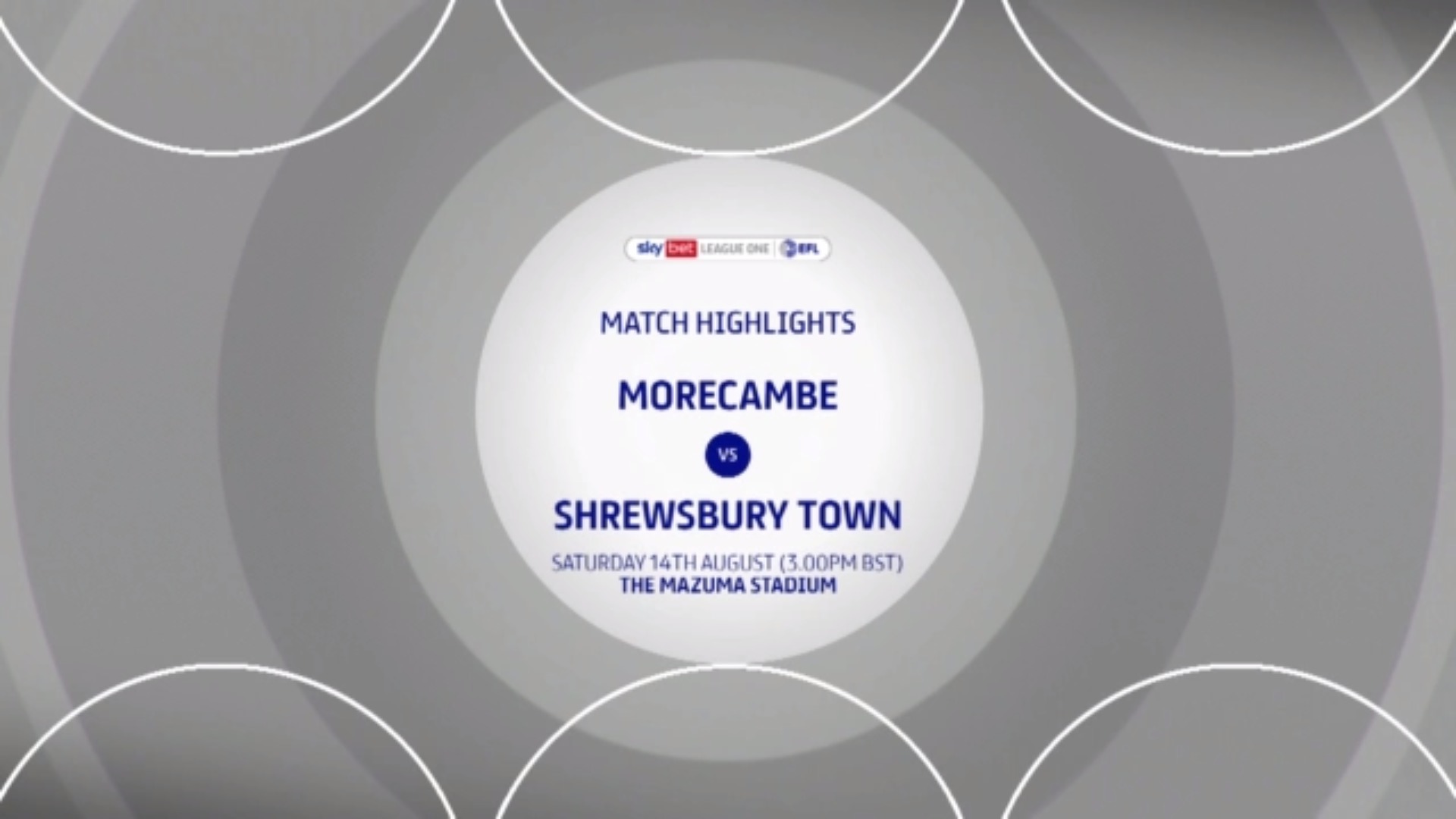 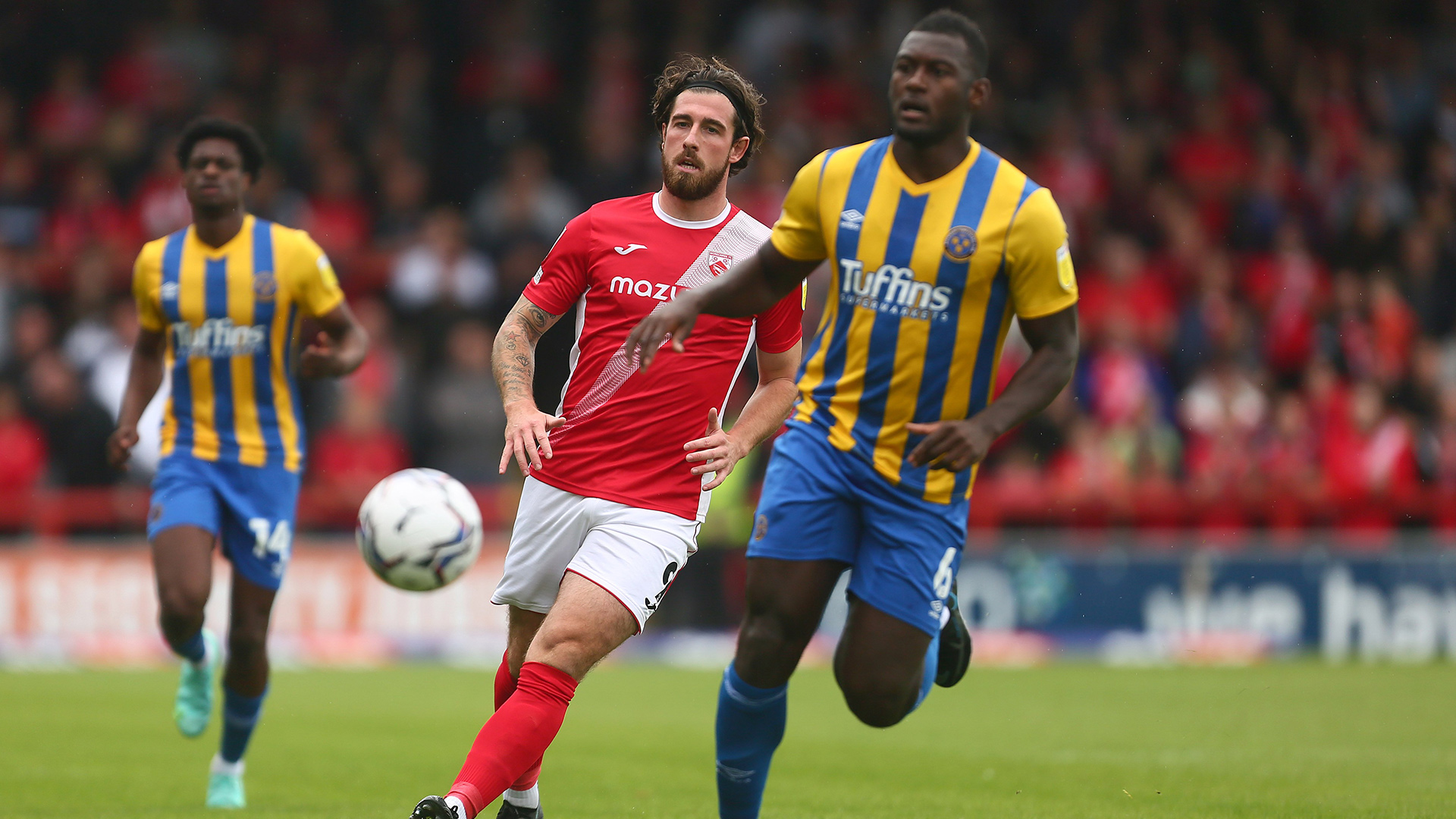