The Shrimps travel to the Tarmac Silverlands Stadium to take on Northern Premier League side Buxton in the 2nd round of the Emirates FA Cup on Saturday 4 November.

The game kicks off at the earlier time of 12:45PM and will be shown live on BBC One and iPlayer.

Morecambe will look to bounce back after they were subject to a 4-0 defeat last weekend at the Mazuma Stadium against MK Dons. Mo Eisa, Harry Darling and Matt O’Riley got their names on the scoresheet.
The two sides last faced each other in the 1994/95 season when both sides were in the Northern Premier League. The Shrimps finished runners up and were promoted to the conference.
The Opposition
Form guide
Buxton came unstuck for the first time in a league match this season against Lancaster City on 20 November. They looked to return to winning ways three days later when they hosted Nantwich Town, however Jamie Ward’s 51st minute goal was cancelled out by a late equaliser. They sit fourth in the Northern Premier League and two points off top spot.The Bucks have had more time to prepare for Saturday’s clash than the Shrimps after their game on Saturday 27 November was postponed due to snow. The Bucks are the lowest ranked side left in this year's FA Cup competition.
Steve Cunningham was manager of National League North side Curzon Ashton when the Bucks started their FA Cup journey this season. He was relieved of his duties in October after the club claimed he was “in talks with another club about their managerial position”. Cunningham was appointed Buxton manager ahead of their trip to York City in the First Round of the competition.
Bucks’ key players
Top goalscorer Diego De Girolamo scored the all-important goal against York City to send the Bucks into the Second Round. The 26-year-old came through the youth setup at Sheffield United. After numerous loan spells, he joined Bristol City where he struggled to break into the first team and was loaned to Cheltenham Town and Chesterfield respectively. The striker spent time at Macclesfield Town before joining Buxton in 2018. Since then, he has established himself as a proven goalscorer and won Player of the Year for the 2019/20 season.
Skipper Josh Granite joined the Bucks in Summer 2020 after helping Barrow to win the National League title. The 29-year-old also wore the captain’s armband at Barrow. Previous to his time with the Bluebirds, Granite spent time at Mossley, Ashton United and Trafford.
Well-known for his time at Nottingham Forest and Derby County, Buxton vice-captain Jamie Ward made the move to the Silverlands this Summer after a spell with National League side Solihull Moors. The 35-year-old has also been capped 34 times for Northern Ireland.
Cunningham’s pre-match thoughts
Buxton manager Steve Cunningham said it is special to be playing in the Second Round in front of the TV cameras.
“I’ve done things quite special with smaller football clubs before,” he said.
“But in terms of personal achievement and also for players, to achieve a Second Round live BBC game, yeah it’s pretty special.
“There's always one team that does it in the Emirates FA Cup and why not Buxton this year.”
Shrimps’ pre-match thoughts
Manager Stephen Robinson said his players have a real opportunity to “put their name in lights”.
“Buxton are the lowest ranked side still left in the FA Cup and they are up against a League One side, we have to make sure we are not on the end of an upset,” Robinson said.
“I have had that a lot during my time in Scotland when we played a lot of the lower teams, it is about mentality and attitude to do things well.
“That’s just the magic of the FA Cup, it is special for players and the atmosphere is incredible - there is a real opportunity for some players to put their name in lights.”
Meet the men in black
Referee Lee Swabey will be the man in the middle for Saturday’s cap clash. He will be assisted by linesmen Matthew Parry and Conor Brown. Benjamin Speedie will be the fourth official.
Swabey has refereed 13 games so far this season in League One, League Two, the Carabao Cup, Papa John’s Trophy and FA Cup, and has handed out 28 yellow cards and one red card.
The Devpn-born official last took charge of the Shrimps at the end of October when they were beaten 3-1 by Oxford United in Sky Bet League One.

The Shrimps progress to the Third Round of the FA Cup thanks to a first-half Cole Stockton on what was a game played in torrential conditions.

It was the hosts who started the game on the front foot and came close to breaking the deadlock on eight minutes after Chris Dawson struck an effort from distance, but it didn’t trouble Kyle Letheren in the Morecambe goal.

The visitors looked to carve out a chance of their own a minute later, however Wes McDonald’s shot sailed harmlessly wide.

Arguably Buxton’s biggest chance of the game fell on 13 minutes after Diego De Girolamo found possession and tried his luck, but the ball crashed off the post and rolled away to safety.

The only goal of the game came on 29 minutes when Cole Stockton timed his run to perfection and latched on to the ball in the area and struck an effort on the angle which rolled beyond goalkeeper Theo Richardson and into the back of the net.

Six minutes from time and Stephen Robinson’s men came agonisingly close to doubling their lead when Alfie McCalmont looked to add a second from close range, but an excellent reflex save from Richardson denied the Leeds United loanee.

The opening 16 minutes of the second-half produced little quality for either side, however McDonald again unleashed an effort on goal on 61 minutes, but he couldn’t find the target.

Four minutes later and that man Stockton came close to adding his, and Morecambe’s, second of the game, but his shot from inside the area sailed wide of the mark.

Stockton’s goal earlier in the game marks his 16th of the season in all competitions, and he very nearly added a 17th, but it was Buxton’s Man of the Match Richardson in goal that denied Morecambe yet again with a fine save.

One minute from time and substitute Jonah Ayunga had a golden chance to wrap up the win for the Shrimps, however after breaking through one-on-one on goal, the striker could only send his effort over the bar.

Morecambe FC can confirm that the Club has secured an extra allocation of tickets for the upcoming Emirates FA Cup Second Round fixture at Buxton FC, to be played this Saturday 4 December 2021.

The Club had requested additional tickets for the game, subject to Buxton FC’s local safety group permitting an increase in the ground capacity, and following confirmation of this on Tuesday 30 November, we will receive 100 additional tickets.

Please be reminded these are for the standing terrace only – no seats are available to Morecambe FC supporters.

Buxton FC have indicated that this additional allocation is now the maximum that they can provide the club for this fixture.

Should there be any tickets remaining at 12 noon on Wednesday 1 December, these will be made available to non-Season Ticket holders, who have an active ticketing account with the Club, who also pre-purchased a match ticket to the Emirates FA Cup First Round fixture against Newport County via our ticketing systems, either online or in person. This applies only to tickets bought prior to the day of the fixture. These will again be available on a one-for-one basis.

Any tickets that remain at 10am on Thursday 2 December will go on general sale.

Please note any future ticket purchases must be collected from the Morecambe FC shop by 5pm on Friday 3 December, there will be no further postal sales. A reminder, tickets cannot be collected on the day of the game either at Morecambe FC or Buxton FC.

Tickets can now be purchased online via https://ticketsmorecambefc.com/packages/LZEmOKzmpW/events or in the club shop.

If you have any questions regarding the above, or your eligibility to purchase, please contact tickets@morecambefc.com who will be happy to assist. 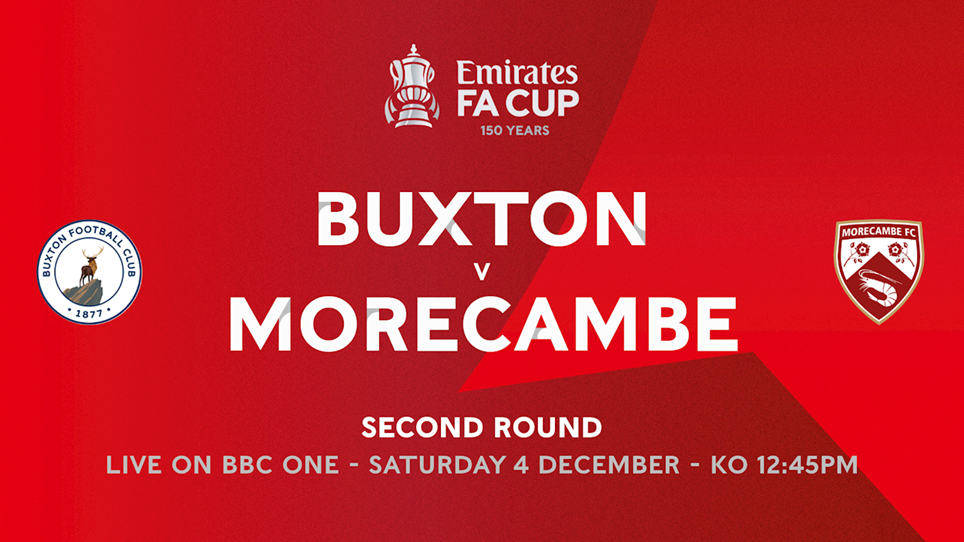 
Applications for tickets will go live at 3pm on Monday 22 November for our Emirates FA Cup Second Round fixture against Buxton FC.