Morecambe travel to Fratton Park on Saturday 11 December to take on Portsmouth in Sky Bet League One.

The Shrimps will look to bounce back after they were beaten 5-0 away at Sunderland in midweek. Nathan Broadhead’s brace along with goals from Ross Stewart, Alex Pritchard and Leon Dajaku secured the points for the hosts on a windy night in the North East.
Four of the eight past meetings between the two sides have ended in a draw. Both teams have won two clashes each with the Shrimps recording 2-0 and 3-1 victories over Pompey in the past. The last clash between the two teams was in February 2017 and the points were shared at Fratton Park after the game ended 1-1.
The Opposition
Form Guide
Pompey currently sit ninth in League One, three points off the Play-Off places. They come into Saturday’s game unbeaten in eight league matches with their last defeat coming back in October at the hands of Ipswich Town. In midweek, they were held to a draw at home to Sheffield Wednesday who were reduced to 10 men for the last 25 minutes.
Manager Danny Cowley played football semi-professionally before going into management in 2007. The 43-year-old started at Concord Rangers where he won three promotions with the club and reached the First Round proper of the FA Cup. Cowley became manager of Briantree Town in April 2015 and guided them to their highest ever finish, which was third in the National League. They were defeated by Grimsby Town in the Play-Offs.
Cowley really made his name during his time at Lincoln City where he guided the club to promotion back to the Football League during his first season in charge. The club also reached the Quarter Final of the FA Cup and, in their second season back in League Two, the Imps won the league to gain promotion to League One. In September 201, he was appointed Huddersfield Town boss before taking over at Portsmouth in March of this year.
Key players
Marcus Harness is currently top scorer for Pompey with nine goals, and one assist, so far this season. He arrived at Fratton Park from Burton Albion in July 2019 where he came through the youth setup. During his time with the Brewers, the 25-year-old spent time on loan at Ilkeston, Aldershot Town and Port Vale before signing for Portsmouth on a three year deal.
23-year-old Reeco Hackett-Fairchild has contributed with four goals so far this campaign. He joined Pompey from National League side Bromley in January 2020 where he later returned for a spell on loan. Hackett-Fairchild also spent time on loan at Southend United before breaking into the first team at Portsmouth. He came through the youth setup at Dagenham & Redbridge before signing for Charlton Athletic in 2016.
Ronan Curtis has scored four goals this season and has three assists to his name. The left-sided player started his career at Derry City in the League of Ireland Premier Division. Portsmouth signed the 25-year-old in May 2018 and he has gone on to make over 120 appearances so far. Curtis has also been capped seven times for the Republic of Ireland.
Cowley’s pre-match thoughts
The Portsmouth boss said he has a lot of respect for Morecambe.
“Morecambe had a positive start to the current season and, although there’s been a difficult run of late, we know they’ll be motivated to put that disappointment behind them,” he said.
“I’ve got a lot of respect for them and thought they were the most organised side in League Two last season.
“They were particularly good against the ball and gave away very little space before winning it and countering quickly.”
Shrimps’ pre-match thoughts
Manager Stephen Robinson said his side need to be braver as they look to bounce back from defeat.
“We are back in, it is a case of bouncing back again - motivating the players because they are human, they make mistakes, we just need to be braver and make better decisions,” he said.
“I don’t pay too much attention to the league table until it really matters, if you’re top of the table in December you don’t get promoted, same if you are near the bottom, you don’t get relegated in December.
“I think if you told me with one game of the season to go that we were fifth bottom, I would have snapped your hand off.
“If we finished it here it would be a huge success for the football club, but I think we can get higher up the division.”
Meet the men in the middle
Charles Breakspear will take charge of Saturday’s game. The Surrey-born official will be assisted by linesmen Leigh Crowhurst and Garry Maskell, while Stuart Butler will be the fourth official.
Breakspear has refereed 19 games so far this season and has distributed 88 yellow cards and two red cards. He’s taken charge of games in League One, Two, the FA Cup, Carabao Cup and Papa John’s Trophy.
He last refereed the Shrimps in September last year when they beat Southend United 2-1 away from home.
Don’t miss a kick with our iFollow coverage
After teaming up with Beyond Radio for the 2021/22 season, supporters will be able to listen to exclusive, full and uninterrupted radio commentary of every single game, home and away, which will be broadcast simultaneously across North Lancashire on 103.5 and 107.5FM, as well as on the iFollow Shrimps platform.
Joining host Dave Salmon is the club’s media assistant Matt Smith, audio passes are available from as little as £2.50 per match, £4.49 for a monthly pass or £45 for a season pass.
As well as full match commentary, the ‘Shrimps Verdict’ podcast will be available post-match, featuring online, on demand content, including audio match highlights, post-match interviews and reaction, and the chance for supporters to have their say.

Two goals either side of the break gave Portsmouth all three points on a wet afternoon at Fratton Park.

The hosts opened the scoring after 11 minutes with Marcus Harness firing home from close range, the 13 minutes from full-time, Connor Ogilvie netted his first goal of the season heading home Miguel Azeez’s corner.

On the 11th minute the hosts were in-front, a ball over the top by Ronan Curtis was picked up by George Hurst who rounded Kyle Letheren in the Shrimps goal before firing his effort onto the crossbar via Scott Wootton’s knee.

The ball dropped to Azeez only to see his shot come back off the post, but there was Harness to fire home from  five-yards out.

Moments later, the Shrimps had their first attempt on goal. Cole Stockton with his back to goal managed to turn his defender before producing an effort which stung the palms of Gavin Bazunu in the Pompey goal.

With nine minutes of the half remaining, Stockton again found himself in the Pompey box, just as he was about to pull the trigger across came Ogilvie to deny the striker his 17th of the season.

The final chance of the first period fell in the favour of Danny Cowley’s side, a free-kick 25-yards from goal was taken by Reeco Hackett, but Letheren was behind it and gathered at the second attempt.

After the restart it was Portsmouth again who were on the ascendancy, a cross from the right by Harness was headed goalwards by Curtis, however Letheren was there to gather.

Stephen Robinson changed the pack just before the hour mark as an injury to Scott Wootton forced him off with Ryan Delaney coming on.

Then Jonathan Obika was replaced with Jonah Ayunga as Obika’s step-up from a long-term hamstring injury continues to take shape.

With 20 minutes of the game remaining, the Shrimps had another free-kick opportunity through Alfie McCalmont, his cross found Adam Phillips but the on-loan Burnely man could not find a away past Bazunu in the Pompey goal.

The hosts doubled their lead on the 77th minute as a corner from Azeez was headed home by Ogilvie.

With the clock ticking down, Phillips let fly from 20-yards looking to catch Bazunu unawares, but the Manchester City loanee was there to make a fantastic one-handed save, flicking the ball onto the crossbar.

Tickets are now on sale for our Sky Bet League One game against Portsmouth.

Tickets are available in the Milton End. (Seated)

Tickets will remain on sale until 12pm on Friday 10 December.

This is an ‘all-ticket’ fixture, therefore tickets must be purchased in advance of the game. No tickets will be available on the day.

Fans must purchase tickets in advance, as there will be no tickets available on the day of the match. Tickets can be purchased in advance from The Morecambe FC Club Shop, online or over the phone. 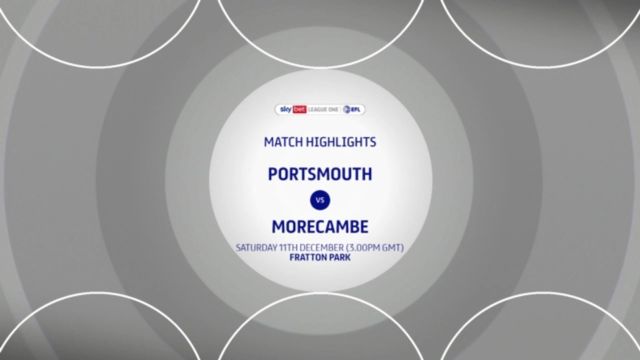 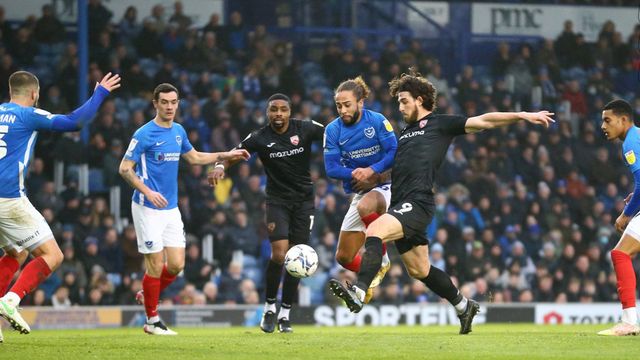