Morecambe are back on the road when they travel to Lincoln City in Sky Bet League One on Tuesday 7 February.

The Shrimps will look to return to winning ways after they were unlucky not to claim all three points on Saturday against Bolton Wanderers. Cole Stockton put Morecambe ahead in the 73rd minute before substitute Amadou Bakayoko struck for 10-man Wanderers deep into added time to equalise.
The two teams have met 13 times in the Football League and the Imps have had the upper hand with five victories compared to Morecambe’s three. Five of the meetings have ended with the points shared. In the reverse fixture at the Mazuma Stadium, Morecambe claimed all three points thanks to goals from Cole Stockton and Scott Wootton.
The Opposition
City come into Tuesday’s clash looking to bounce back from two defeats on the spin. Michael Appleton’s men were beaten 2-1 away at MK Dons this weekend and lost by the same scoreline to Burton Albion at the LNER Stadium the week before. They sit 18th in League One, just two points clear of the drop zone.
As a player, Appleton had a brief spell at Lincoln when he joined the club on loan from Manchester United in 1995 before going on to play for Preston North End and West Bromwich Albion. The 46-year-old took temporary charge at the Hawthorns before going on to manage Portsmouth, Blackpool, Blackburn Rovers and Oxford United. Appleton arrived at Lincoln City in September 2019 following the club’s promotion to League One.
Key players
Anthony Scully joined the Imps in February 2020 after coming through West Ham’s Academy. The 22-year-old has scored eight goals so far this season and has contributed with five assists. He also has experience playing for the Republic of Ireland at U17, U19 and U21 level.
Experienced forward Chris Maguire has four goals and five assists for the club so far this season. Starting his career at Aberdeen, where he went on to make over 130 appearances, Maguire went on to play for a number of Clubs including Sheffield Wednesday, Oxford United and Sunderland before joining Lincoln City in the summer.
Teddy Bishop also arrived at the LNER Stadium this summer after spending 17 years at Ipswich Town where he progressed through the club’s Academy. The 25-year-old made over 120 appearances for the Tractor Boys before joining Lincoln City for an undisclosed fee. The midfielder has contributed with three goals and three assists so far this season for the Imps.
Shrimps’ pre-match thoughts
Boss Stephen Robinson said he’s expecting a tough game from a side who ‘play football the right way’.
“I think Lincoln are a good side, they’re a good footballing side, they’ve stuck to their principles throughout the season,” he said.
“Similarly to ourselves, they’ve had a lot of injuries and have been a little bit unfortunate in games but I rate them.
“I think they’ve got an excellent manager in Michael Appleton and David Kerslake his assistant, so it’s going to be a tough game but it’s two sides who play football the right way.”
Meet the officials
Cumbrian-based referee Anthony Backhouse will be the man in the middle on Tuesday night. He will be assisted by linesmen Matthew Smith and Gareth Viccars. Lisa Rashid will be the Fourth Official.
Backhouse has taken charge of 24 matches this season and has handed out a total of 80 yellow cards and one red card.
He last refereed the Shrimps in August when they beat Sheffield Wednesday 1-0 at the Mazuma Stadium.
Don’t miss a kick with our iFollow coverage

Can’t make it to the LNER Stadium to back the boys against Lincoln City on Tuesday night?

Two first-half goals from Morgan Whittaker and Cohen Bramall helped the Imps to victory over the Shrimps, despite a stunning effort from Toumani Diagouraga.

Whittaker prodded home after 10 minutes after Anthony O’Connor cleared off the line, then Brammall netted ten minutes later after some neat work from the Lincoln man.

The Shrimps pulled one back through Diagouraga as the ball fell to him on the edge of the box, but that would be the last goal acton for Stephen Robinson’s side at the LNER Stadium.

Whittaker started well for the hosts and tried to chip Trevor Carson after five minutes, but the ‘keeper, on his return from a concussion lay off was alert to his attempt.

On the 10th it was Whittaker who opened the scoring.

A through ball found TJ Eyoma alone in the penalty area, he chose to lay the ball off to Anthony Scully instead of taking the shot on, Scully’s effort was superbly cleared off the by O’Connor before Whittaker tapped the ball into an empty net.

The Imps scored their second of the game 10 minutes later, another through ball into the box found Bramall in the box, he did superbly well to turn his man in the box and get his shot away, which beat Crason at his near post.

A minute shy of the break the Shrimps had an opportunity to get back into the game through Adam Phillips, but his free-kick was not troubling Josh Griffiths in the Lincoln goal.

O’Connor was the next to try his luck. An inch-perfect corner from Phillips found the head of the skipper who came with a couple of inches away from finding the top-left corner.

Manager Stephen Robinson decided that a change was needed at the start of the second-half, with Dylan Connolly making way for Alfie McCalmont.

On the 58th minute the Shrimps were handed a lifeline after a Diagouraga found the back of Griffiths’ goal. A free-kick from Phillips was played short to Ryan Cooney who put a ball into the box for it to be cleared as far as Diagouraga who lashed a volley home from the edge of the area.

Six minutes later Ayunga had a golden chance to level the game, a ball across the face of the box needed a composed finish from the front man, unfortunately Griffiths was there to make a huge save from the Imps.

14 minutes from time Carson made a huge save to deny Ben House who had just came on from the bench.

With minutes left of the game remaining, the Shrimps came close to nicking a point. A corner from   Greg Leigh was headed goal-wards by Jon Obika, but the strikers effort cannoned off the post and away from danger.

We return to the Mazuma Stadium on Saturday as we take on Gillingham in Sky Bet League One.

Tickets are now on sale for our Sky Bet League One fixture against Lincoln City.

Tickets are available in the Stacey West Stand.

Tickets will be available to buy on the day from Lincoln City [subject to availability], though we are encouraging supporters to buy in advance from Morecambe FC to avoid delays on the day.

*Note: Those purchasing under 18 tickets but fall under 12 must be accompanied by someone over the age of 18. 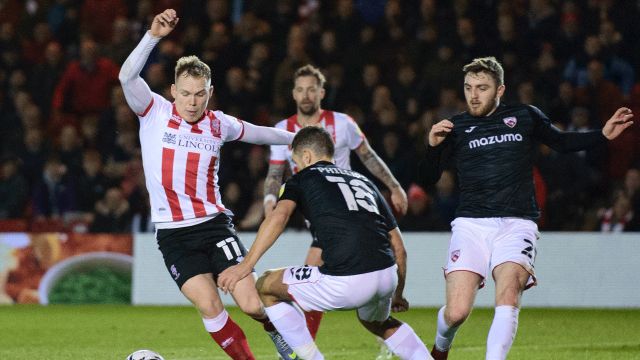