Morecambe are back on home turf at the Mazuma Stadium on Saturday 26 February when they welcome Ipswich Town in Sky Bet League One.

The Shrimps are looking to get back to winning ways after an unlucky loss on Tuesday night, playing away to Rotherham United. The game could have ended very differently for the lads, but two goals from Freddie Ladapo as well as some excellent saves from keeper Josh Vickers saw the Millers run out 2-0 winners.

The two teams have met just three times, twice in the FA Cup in 2001 and 2003, both of which resulted in a win for the Tractor Boys, and last August, as Morecambe kicked off their current campaign. In the last meeting, at Portman Road, Cole Stockton netted two goals for the Shrimps, but a stoppage time equaliser from Bonne rescued a point for the hosts.

Ipswich Town currently sit ninth place in Sky Bet League One and are just four points away from the Play-Off positions. The Portman Road Club come into Saturday’s game against the Shrimps in a mixed run of form, with three victories and two draws from their last five games.

Their last fixture, at home to Cheltenham Town, saw them held to a goalless draw on Tuesday night, despite chances from Burns and Chaplin.

Appointed just two months ago, Kieran McKenna manages the Suffolk-based outfit. As a player, McKenna started his youth career at Northern Irish club Enniskillen Town United and went on to sign a scholarship contract in 2002 with Tottenham Hotspur. At the age of 22, the Northern Ireland international was forced to retire from playing due to a hip injury.

Following his injury, McKenna began a career in coaching, working his way up through the Tottenham Hotspur Academy, before leaving to take up the under 18s manager position at Manchester United. In 2018, he was promoted to become Manchester United's assistant manager under José Mourinho. The 35-year-old worked with the first team at United until December 2021, where he left to become the manager of Ipswich Town following the dismissal of Paul Cook.

Macauley Bonne came through the ranks at hometown club Ipswich Town and spent six years there before moving to Colchester United to continue his development at their Academy. Bonne signed for Championship team QPR in 2020 before, just a few months later, returning to his home town club on a season long loan. With 12 goals to his name so far this campaign, Bonne is currently leading Town’s goalscoring table.

Midfielder Wes Burns began his career at Bristol City Academy, he played for The Robins for five years as well as spending time out on loan at a variety of other clubs. The 27-year-old made 144 appearances for Fleetwood Town, before making his debut for Ipswich last year on the opening day of the 2021/22 campaign. At the age of 18, Burns was named in the Welsh U21s national team, scoring the first goal in their 3-0 win against Iceland. He has since been called up for the senior team.

Bersant Celina grew up in Norway and was offered a scholarship from Manchester City Academy when he was 16 years old. Just two years later, he signed a three-year professional contract with City. Celina went on to play for Swansea City and joined French side Dijon in 2020. He has previously played for Ipswich Town and is back again on a season long loan. Celina has also been part of the Kosovo National Team since 2011, playing in their youth setup until 2014, when he joined the senior team.

Derek Adams will take charge of his first game since re-joining the club as Manager, and he says the priority is winning football matches.

He said: "The priority is to get three points, that's my biggest factor at this moment in time, is about getting wins on the board.

"That's what we're going to try and do, we've got to do it quickly.

"I only came in this morning [Thursday] and I have to assess things very quickly, which I'll do, then we'll take the Ipswich game as we come."

Matthew Donohue will be the man in the middle on Saturday and will be assisted by linesmen Philip Dermott and Nik Barnard. Martin Coy is Fourth Official.

The Manchester-based referee has taken charge of 24 games so far this season and handed out 97 yellow cards and six red cards.

The last time that Donohue officiated a Shrimps game was back in 2019 against Forest Green Rovers at the Mazuma Stadium, which the visitors won. He has spent most of his time within the EFL circuit, but this will be his first League One match this season.

Joining host Dave Salmon is the Club's Media Assistant Matt Smith, audio passes are available from as little as £2.50 per match, £4.49 for a monthly pass or £45 for a season pass.

Morecambe 1-1 Ipswich Town
Sky Bet League One
The Mazuma Stadium
Saturday 26 February 2022
Kick-Off: 3pm
Attendance: 4,928 (1,270 away fans)
Substitute Aaron Wildig put the Shrimps ahead on the hour mark before Wes Burns cancelled out his header in the 87th minute to take home a share of the points.
The first chance of the game fell the way of the visitors. Tyreeq Bakinson knocked the ball over the top to James Norwood who brought it down and skewed his shot wide.
Rhys Bennett stopped the Shrimps from falling a goal behind when he got down well to stop Sone Aluko.
Just before the half-hour mark Sam Morsy’s curling strike looked destined for the top corner but Trevor Carson pulled off a magnificent save at full stretch to deny the Ipswich skipper. The rebound fell to Macauley Bonne who headed wide from a tight angle.
The Shrimps were presented with an opportunity three minutes later when Jonah Ayunga was brought down on the edge of the area however Shane McLaughlin failed to capitalise and the free-kick came to nothing.
Up the other end Macauley Bonne got onto the end of Bakinson’s cross from the right but he couldn’t direct his header on target.
The Shrimps continued to soak up pressure from the visitors and kept them at bay.
Carson was called into action again when he clawed out Bakinson’s strike from the edge of the box.
Half-time: Morecambe 0-0 Ipswich Town
Ten minutes into the second half Morecambe created an opportunity when the ball was laid off to Cole Stockton following a smart move but the striker’s effort, through a crowd of bodies, flew over.
Carson was on hand once again to keep out a thunderous strike from Bonne minutes later.
Derek Adams’ double substitution paid off when the pair linked up to put the Shrimps ahead on the hour mark. Wildig got on the end of Adam Phillips’ cross from the right and guided his header into the far corner.
The Shrimps suffered a scare in the 67th minute when the ball bobbled around in the box but the backline managed to clear from danger.
Kieran McKenna’s men came close to finding a leveller in the 76th minute when Carson pushed out Bersant Celina’s powerful long-range strike.
Their pressure paid off in the 87th minute when Wes Burns bundled his way into the box and got a shot away which crept into the far corner to draw the Tractor Boys level.
Janoi Donacien came dangerously close to giving Ipswich the lead a minute later but once again Carson pulled off a brilliant stop to keep the ball out of the net.
The Shrimps had one final chance in the 90th minute when Wildig found Stockton in a good position. He couldn’t brought the ball down and found Toumani Diagouraga who fired wide.
Full-time: Morecambe 1-1 Ipswich Town
Morecambe: Carson, Leigh, O’Connor, Bedeau, Diagouraga, Stockton, Ayunga (Phillips 46’), S McLoughlin, Cooney (Wildig 46’), Fane, Bennett. 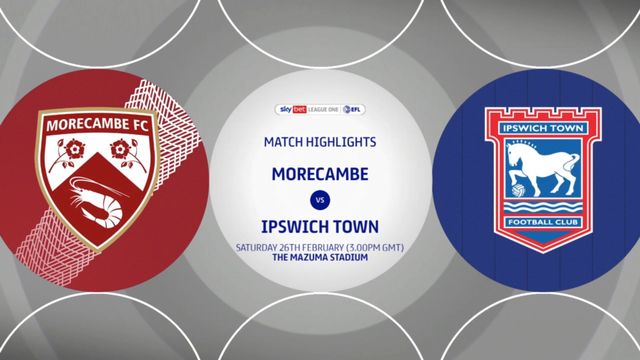 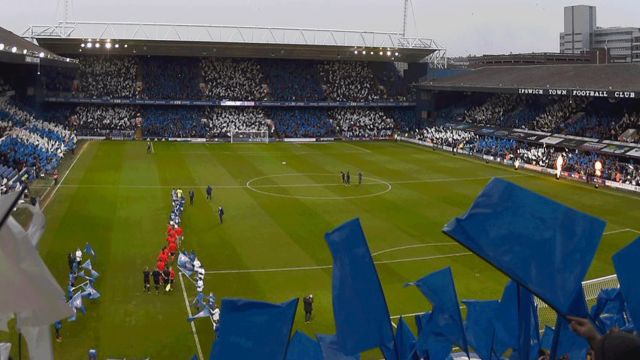