Morecambe look to return to winning ways when they travel to South Yorkshire on Tuesday 1 February to take on Sheffield Wednesday in Sky Bet League One.

The Shrimps were held to a 2-2 draw at the weekend when they were in Lancashire derby action away at Accrington Stanley.
Jonah Ayunga netted twice before the half-hour mark to give the Shrimps a two-goal lead, however Colby Bishop and Michael Nottingham struck before the break to put the home side back on level terms.
Neither team could find a winner in the second half meaning that the points were shared at the Wham Stadium.
In the reverse fixture, Stephen Robinson’s men claimed all-three-points against the Owls thanks to a Dennis Adeniran own goal. The two sides also met in the FA Cup First Round back in 2011, but the Shrimps were beaten 2-1.
The Opposition
Darren Moore’s men find themselves eighth in League One and are six points off the Play-Off places. The Owls were relegated to the third tier on the final day of last season after drawing 3-3 with Derby County. They would have retained their place in the Championship if it hadn’t been for a six-point deduction. Wednesday come into the clash against the Shrimps on a mixed run of form with three defeats and two victories from their last five games.
As a player, Moore began his career at Torquay United before going on to play for a number of clubs including Bradford City, West Bromwich Albion, Derby County and Barnsley. The centre-back was also capped twice for Jamaica.
Moore was appointed permanent manager of West Brom after a spell as Caretaker Manager. At the time of his dismissal, the Baggies were fourth in the Championship. He returned to another former club in Doncaster Rovers the following summer and guided them to a ninth place finish in what was the season that was curtailed due to COVID. The 47-year-old left Rovers at the beginning of March the following season to take charge at Hillsborough.
Key players
28-year-old Josh Windass joined Sheffield Wednesday initially on-loan before making the move permanent in September 2020. At the start of this season, he suffered a hamstring injury which ruled him out for the first few months. After coming through the youth setup at Huddersfield Town, Windass went on to play for Harrogate Railway Athletic, Accrington Stanley, Rangers and Wigan Athletic before arriving in South Yorkshire.
Owls’ skipper Barry Bannan has been at Wednesday since 2015. The 32-year-old joined from Crystal Palace after a short loan spell at Bolton Wanderers. He has also been capped for Scotland over 20 times. The midfielder has contributed with three goals and four assists so far this campaign.
Florian Kamberi is at the club on a season-long loan from Swiss side St. Gallen. The 26-year-old has spent time at Grasshopper, Karlsruher SC, Hibernian and Rangers. He represented Switzerland at U20 and U21 level and has now been called up to the Albania national team. The forward has four goals for the Owls so far this season.
Shrimps’ pre-match thoughts
Manager Stephen Robinson said there’s no reason the Shrimps can’t get the win on Tuesday after beating Sheffield Wednesday earlier on this season at the Mazuma.
“They are a good team, they are a huge football club obviously, but on the pitch we have shown that there is not a lot of difference as we have beaten them before,” Robinson said.
“There is no reason why we can’t do that again, I feel like we are on a good run of form, the confidence is building and growing, we have changed a lot of things over the last six month and we are starting to reap rewards.
“This is a bonus game for me, we have absolutely nothing to lose, nobody expects anything outside of our dressing room, we have learned a lot about ourselves recently and we will go there with a lot of confidence.”
Meet the men in the middle
Ollie Yates will take charge of Tuesday night’s match.The Staffordshire-based official will be assisted by linesmen Joe Clark and Grant Taylor. Robert Madley will be the Fourth Official.
Yates has been the man the middle 16 times this season and has awarded 58 yellow cards and two red cards.
Yates last refereed the Shrimps back in December when they were subjected to a 5-0 defeat away at Sunderland.
Don’t miss a kick with our iFollow coverage
After teaming up with Beyond Radio for the 2021/22 season, supporters will be able to listen to exclusive, full and uninterrupted radio commentary of every single game, home and away, which will be broadcast simultaneously on 103.5FM, 107.5FM and DAB+ digital radio across North Lancashire and South Cumbria as well as on the iFollow Shrimps platform.
Joining host Dave Salmon is special guest Abi Rodwell, audio passes are available from as little as £2.50 per match, £4.49 for a monthly pass or £45 for a season pass.
Supporters that aren't travelling to Hillsborough are advised that video will be streamed through the Club's iFollow platform.
As well as full match commentary, the ‘Shrimps Verdict’ podcast will be available post-match, featuring online, on demand content, including audio match highlights, post-match interviews and reaction, and much more!

Two second half goals courtesy of George Byers and Nathaniel Mendez-Laing proved enough for Wednesday to claim all three points.

The first chance of the game fell the way of the hosts after nine minutes when a quick free kick found Josh Windass inside the box, but his stinging shot from the angle at close range was blocked superbly by Trevor Carson.

Eight minutes later and Mendez-Laing played a neat one-two to find himself in possession just outside the box, but his effort was scuffed over the crossbar without testing Carson in the Morecambe goal.

The Shrimps’ first chance of the game came on 19 minutes when some nice build up play saw the ball reach the path of Stockton, but Morecambe’s leading scorer was in an offside position as he slotted the ball home.

Unable to carry on as a result of his early save, Carson made way for substitute shot stopper Kyle Letheren on 23 minutes.

A huge change for Wednesday came on 38 minutes when Mendez-Laing picked up possession and drove forwards, played a one-two inside the box and looked certain to find the back of the net, but a last-ditch block from Ryan Cooney denied the hosts.

The South-Yorkshire side did have the ball in the back of the net on three minutes later, after Marvin Johnson side-footed a volley beyond Letheren on the angle, but the linesman’s flag on the far side came put a premature end to the Owls’ celebrations.

Moments after the Fourth Official’s board indicated a minimum of seven minutes added on at the end of the first half, a powerful strike from distance courtesy of Windass sailed harmlessly over the target.

Three minutes before the half-time whistle and it was that man Windass again who came close for Wednesday, but his headed attempt was always going away from goal.

Four minutes into the second half and the Owls had another goal chalked out, Florian Kamberi this time judged to be in an offside position as he headed home from a shortly-taken corner.

Wednesday did open the scoring however on 54 minutes, Byers latched on to a pass from Barry Bannan, set himself with one touch before rocketing a shot into the top right corner.

Shouts for a Shrimps’ penalty were waved away by referee Ollie Yates when Bailey Peacock-Farrell tackled Jacob Bedeau in the box on 75 minutes, the referee deciding the goalkeeper made a fair challenge on the defender.

A speculative strike from Adam Phillips on 81 minutes had plenty of power, but the midfielder couldn’t keep his shot down and it sailed into the Morecambe faithful behind the goal.

Stephen Robinson’s men came agonisingly close to an equaliser three minutes later when a goal-line scramble ensued, but efforts from Stockton, Obika and O’Connor couldn’t find the back of the net.

Seconds later and Phillips nearly forced the ball home after closing down Peacock-Farrell and blocking an attempted clearance, but the ball rolled slowly behind for a goal kick.

The points were rounded up for the hosts in the first minute of time added on at the end of the second half when Mendez-Laing’s strike took a deflection and found its way to the back of the Morecambe net.

Tickets are now on sale for our Sky Bet League One game against Sheffield Wednesday.

Tickets are available in the West Upper Stand. We have received an initial allocation of 810 tickets.

Tickets will be available to buy on the day from Sheffield Wednesday [subject to availability], though we are encouraging supporters to buy in advance from Morecambe FC to avoid delays on the day.

Please note, if you do choose to purchase on the day, this will be cash only from the away turnstiles.

Cut off for postage will be Wednesday 26 January at 5pm.

*Must be accompanied by an adult.

**Must be accompanied by an adult. 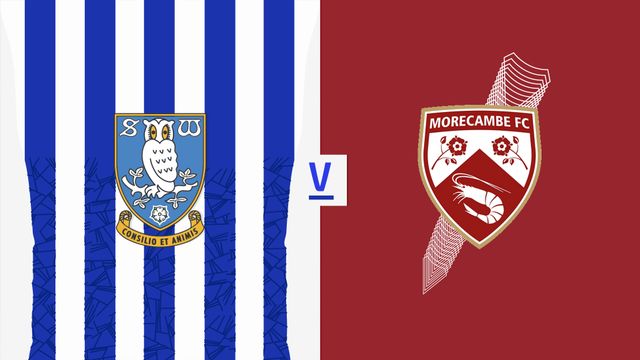 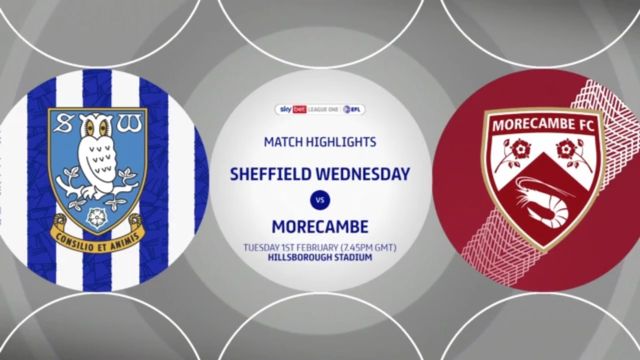 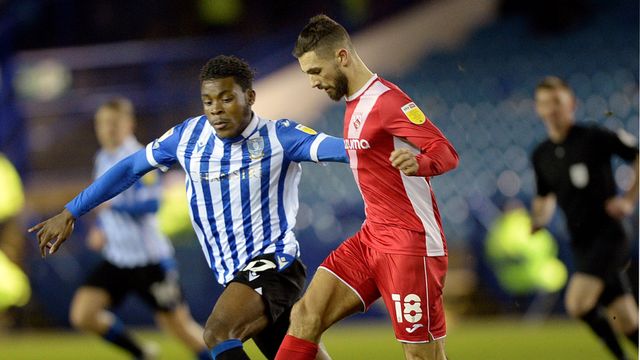