Morecambe turn their attention back to Sky Bet League One when they travel to Plough Lane to take on AFC Wimbledon on Saturday 15 January.

The Shrimps come into the game after bowing out of the FA Cup to Tottenham Hotspur on Sunday following a 3-1 defeat. Captain Anthony O’Connor sent the travelling supporters wild just after the half-hour mark when he put the Shrimps ahead with a side footed volley. It took the Premier League side until the 74th minute to strike back after making a number of changes. Harry Winks drew Spurs level with a free-kick before substitutes Lucas Moura and Harry Kane found the back of the net within the last ten minutes.

The two sides have faced each other 11 times with three of those games ending in a draw. Morecambe and AFC Wimbledon have won four games apiece but it was Saturday’s hosts who took all three points when the two teams met at the Mazuma Stadium earlier this season. Back in September, the Dons won the game 4-3 in the fourth minute of stoppage time. Cole Stockton scored two for the Shrimps and former Don Shane McLoughlin also got his name on the scoresheet.

Mark Robinson's side find themselves 20th in Sky Bet League One but could be leapfrogged by the Shrimps if victorious on the road. The South-West London side have played two less games though and they come into Saturday’s game without a win in four and were beaten in midweek away at MK Dons. They were on the end of an FA Cup shock last weekend when they were defeated 2-0 by National League high-flyers Boreham Wood at Meadow Park.

Robinson is approaching 12 months in charge of the club. The former Fulham youth player was initially appointed interim manager at the club following the dismissal of Glyn Hoges. Robinson joined the football club in 2004 and has served a number of roles including Head of Youth, Centre of Excellence Manager, Academy Manager, First Team Coach, Lead Professional Phase Coach and Loan Manager.

Striker Ollie Palmer arrived at the club in Summer 2020 from Crawley Town where he scored 27 goals during a two-year spell. During his time at Havant & Waterlooville, the 29-year-old finished joint top scorer in the National League South with 25 goals from 42 appearances in the 2012-13 season. Palmer has also played for Mansfield Town, Leyton Orient and Lincoln City as well as a number of other clubs on loan. This season, he is joint-top scorer with seven goals so far.

20-year-old Jack Rudoni is also on seven goals this season. He signed his first professional contract for the club in March 2019 after joining the academy at 11 following his release from Crystal Palace. He has spent time on loan in non-league at Corinthian-Casuals and Tonbridge Angels respectively.

Ayoub Assal signed his first professional contract a month later than Rudoni, in April 2019. The 19-year-old has been loaned out to Metropolitan Police and Billericay Town during his time at the club and made his league debut back in March 2021. He has six goals so far this campaign.

Assistant Manager Diarmuid O’Carroll said the players are completely focussed on the task ahead.

“This is massive now, the Tottenham game was always a bonus,” he said.

“We hoped it would go well, it did go well so now we kick on.

"It’ll be quickly forgotten if we can’t do the business on Saturday and Tuesday going forward.

“No new injuries to report which is fantastic, the subs we made were due to tiredness and just fresh legs.”

Meet the men in the middle

Benjamin Speedie will take charge of Saturday’s game. The Merseyside-born official will be assisted by linesmen Damith Bandara and Darren Blunden, Anthony Da Costa will be the fourth official.

Speedie last refereed the Shrimps back in October when they were beaten 3-1 away at Cheltenham Town. This season, he has taken charge of 23 matches and has awarded 66 yellow cards and two red cards.

Joining host Dave Salmon is special guest Gab Sutton, audio passes are available from as little as £2.50 per match, £4.49 for a monthly pass or £45 for a season pass.

Morecambe picked up a valuable point with a solid defensive display on their first visit to the new Plough Lane.

With Stephen Robinson back in the dugout after missing the Spurs game with Covid-19, the Shrimps made two changes with Aaron Wildig and Arthur Gnahoua returning to the starting line up as Trevor Carson and Jacob Bedeau made their League debuts for the Club.
In a game of few chances, it was Carson who produced the standout moment with a superb second half save from Ollie Palmer's flick header to secure a clean sheet.
AFC Wimbledon started the game on the front foot with several crosses flashing across the Shrimps' box, but it was the Robinson's men who created the better chances.
Top scorer Cole Stockton was played in on goal, but was denied a shot on target by a superb covering tackle from Ben Heneghan.
The next chance saw former Don Shane McLaughlin find an opening in the box, but his drilled effort could only find the side netting.
Half-time: AFC Wimbledon 0-0 Morecambe
After a sluggish first half, the home side stepped up the pace after the break, but the Shrimps defended superbly.
The hosts' main threat came when striker Palmer got end of a near post cross which Carson flicked over at full stretch.
George Marsh then flashed a shot over from 25 yards before Jack Rudoni curled an effort wide.
Morecambe then produced a late rally with Jonah Ayunga firing well over from the edge of the area as both sides pushed for, but failed to find, a late winner.
Full-time: AFC Wimbledon 0-0 Morecambe
AFC Wimbledon: Tzanev, Alexander, Heneghan, Nightingale, Osew, Marsh, Woodyard, Assal (Kajal 83'), Rudoni (Mebude 83'), McCormick, Palmer (Ablade 88')
Subs not used: Oualah, Lawrence, Chislett, Cosgrave.
Goals: None
Bookings: Marsh 83', Ablade 90+1'
Red Cards: None
Morecambe: Carson, McLaughlin, O'Connor, Bedeau, Leigh, Wildig (Cooney 68'), McLoughlin, Gnahoua (McDonald 75'), Diagouraga, Stockton, Ayunga (McCalmont 90')
Subs not used: Letheren, Jones, Delaney, Gibson.
Goals: None
Bookings: Wildig 58', Leigh 65'

Tickets are now on sale for our Sky Bet League One away fixture against AFC Wimbledon.

Tickets are available in the Cherry Red Record Stand. (Seated)

Tickets will remain on sale until 12 noon, Friday 14 January.

Tickets can be purchased in advance from the Morecambe FC Club Shop, online or over the phone, as well as on the day of the match from AFC Wimbledon.

Those that are collecting tickets from the Club Shop must do so by no later than 1pm on Friday 14 January.

Fans will have the opportunity to purchase on the day of the game, at Plough Lane, at no extra charge. 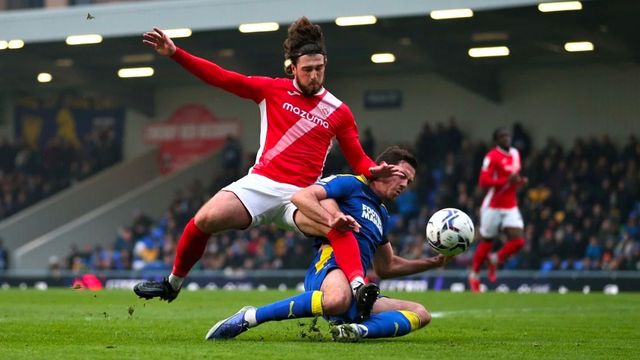