The Shrimps are back on the road on Saturday 5 Match as they make the long journey south to take on Plymouth Argyle in Sky Bet League One.

Derek Adams’ side come into the game after being held to a draw at home to Ipswich Town on Saturday. Half time substitute Aaron Wildig caught Adam Phillips’ cross and netted a header into the corner, but despite numerous quality saves from goalkeeper Trevor Carson, Wes Burns’ 87th minute goal rescued a point for the Tractor Boys.

The Shrimps have met Argyle 13 times since 2011, with every game taking place in League Two. Last October marked the first clash for Morecambe and The Pilgrims as League One clubs.

The reverse fixture at the Mazuma Stadium saw the teams settle for a point apiece. Jonah Ayunga put the Shrimps ahead inside the opening six minutes, but the visitors hit back just six minutes later when Ryan Hardie’s strike was initially cleared off the line before falling to Danny Mayor who slotted home from close range.

Plymouth gained promotion from League Two in the 2019/20 campaign, and after avoiding relegation last season, they are currently sitting in seventh place in the table with three wins from their last five games.

Last time out, the Pilgrims lost at home to league-leaders Rotherham United, a cross from Wiles reached Michael Smith who rifled a low finish beyond Plymouth keeper Michael Cooper in the 63rd minute, and that proved enough for the visitors to take home all three points.

Manager Steven Schumacher spent his youth career at Everton where he progressed through their apprenticeship programme. During this time, he was also called up to represent the England at youth level and was named captain for the Under 19s. After leaving the Goodison Park Club, Schumacher made over 400 appearances as a midfielder for a number of clubs including Bradford City, Crewe Alexandra, Bury and Fleetwood Town.

In 2017, after being released from Stevenage, Schumacher took a coaching job at Everton and spent time as interim manager at Southport. Just one year later, he returned to Bury as first team coach, assisting caretaker-manager Ryan Lowe, before announcing his retirement from playing.

Following a successful promotion for Bury, Lowe took Schumacher along to Plymouth with him as assistant manager, the two saw their immediate return to League One when the team finished the season in third place. In December 2021, Schumacher was swiftly appointed manager following Lowe’s departure to Preston North End.

At 16, Macaulay Gillesphey joined Newcastle United where he progressed through the Academy before signing a professional contract in 2015. The centre-back spent two seasons on loan at Carlisle United before signing on a permanent basis. A year into his contract, Gillesphey left Cumbria for pastures new with Australian club Brisbane Roar, linking up with then-new manager Robbie Fowler. After returning to the UK, the 26-year-old joined Plymouth Argyle in June 2021.

Ryan Hardie is a boyhood Rangers fan and came through the ranks at Ibrox. After spending five years with the senior side, as well as loan spells at various other Scottish clubs, the 24-year-old moved to Blackpool in 2019 and was signed to Plymouth Argyle on a loan basis, before putting pen to paper on a permanent deal in January 2021. Hardie, who has represented his native Scotland at youth level, is top scorer for the Pilgrims so far this season with 12 goals to his name.

Ryan Broom graduated from Bristol Rovers' youth set-up in 2015 and made his professional football debut for the senior team that same year. He has been on loan a various clubs and joined Cheltenham Town on an initial one-year contract where he would go on to make 88 senior appearances for the Club. The midfielder is currently on loan at Plymouth Argyle for the 2021/22 season from Championship club Peterborough United.

Saturday's fixture sees manager Derek Adams return to his former employers, and the 46-year-old says the Shrimps can expect a tough test against the Pilgrims.

"[It's a] fantastic football club, I enjoyed four years there, you see the backing they get when they're doing well, they've got a fantastic fanbase.

"They deserve to be in a higher division than they are.

"We need a run of wins that is going to get us out of the trouble we're in, we can't lose many games between now and the end of the season, we've got to win games and we've got to pick up points."

Alan Young will be the man in the middle on Saturday, and will be assisted by linesmen Darren Blunden and Michael Begley with Richard Morris completing the line-up as Fourth Official.

The Milton Keynes-based referee has taken charge of 16 games so far this season and handed out 69 yellow cards and three red cards across League One, League Two, the FA Cup and the Football League Trophy.

Young has previously officiated a handful of games for Plymouth Argyle, but just one for the Shrimps, which came back in August 2018 in a 6-0 loss away at Crewe Alexandra.

Can’t make it to the Home Park Stadium to back the boys against Plymouth Argyle on Saturday afternoon? Not a problem!

After teaming up with Beyond Radio for the 2021/22 season, supporters will be able to listen to exclusive, full and uninterrupted radio commentary of every single game, home and away, which will be broadcast simultaneously on 103.5FM, 107.5FM and DAB+ digital radio across North Lancashire and South Cumbria as well as on the iFollow Shrimps platform.
Joining host Dave Salmon and the Club's Media Assistant Matt Smith is Tom Collins of Shrimps Online, audio passes are available from as little as £2.50 per match, £4.49 for a monthly pass or £45 for a season pass.
As well as full match commentary, the ‘Shrimps Verdict’ podcast will be available post-match, featuring online, on demand content, including audio match highlights, post-match interviews and reaction, and much more!

Two first-half goes from Plymouth Argyle sealed the three points for the home side, but the Shrimps will be ruing missed chances.

Conor Grant opened the scoring on the 14th minute with a far-post header before Ryan Hardie also found the back of the net with a headed effort.

The first chance of the game fell the way of the hosts, as a short corner from Grant was returned to him before he whipped a delightful cross towards the back post in the direction of Argyle captain Joe Edwards.

The midfielder who found himself with a lot of space to work with, decided to take the shot on the volley, which forced a tremendous save from birthday boy, Trevor Carson.

On the 14th minute of the game, the Green Army pulled ahead.

A ball into the box by Ryan Broom was perfect for Grant, who had the jump on Ryan Cooney to head the ball past Carson.

Two minutes later, the Shrimps had a great chance to pull level, a ball over the top by Shane McLoughlin found Cole Stockton, his flick on found Dylan Connolly on the run, but the striker could not squeeze the ball past the advancing Michael Cooper.

Just as the half-an-hour mark the Shrimps came close again, this time Stockton took the game by the scruff off the neck by taking on two Arygle men before drilling across the box, unfortunately nobody was there to apply the finish.

Eight minutes before the break, Stockton was at it again. Again he broke the back-line and this time drilled an effort, looking for the far corner of Cooper’s goal, but it was just off-target and millimetres away from finding the studs of Alfie McCalmont.

Against the run of play, Argyle doubled their lead.

A cross in from the left by Mayor was flicked on by the head of Hardie, who looked to be in an offside position, nodded home past Carson.

After the break it was the Shrimps had the first meaningful effort on target, Adam Phillips picked the ball up about 25-yards out front goal and decided to take the shot on himself but Cooper made another solid save to deny the on-loan Burnley man.

Just after the hour mark Argyle had a chance of their own, a ball into the box found Hardie, who did well to bring the ball down before turning and firing over the top and into the home support.

The Shrimps should have pulled a goal back on the 71st minute, another driving run by Connolly saw him feed Jon Obika, who was introduced on the hour mark, but the forward’s left-footed effort flew over the bar.

Seven minutes later Derek Adams’ side had another chance to pull a goal back, a cross in from the right by Phillips was met on the head by O’Connor who was up from an earlier corner, bt it was Cooper in the Argyle goal that would win the battle once again.

Tickets are on sale for our Sky Bet League One game against Plymouth Argyle.

Tickets are available in the Barn Park Stand.

In advance sales for this fixture will close on Thursday 3 March, 12 noon.

Purchases can be made on the day at Home Park, but there will be a price increase of £2 on all ticket prices. 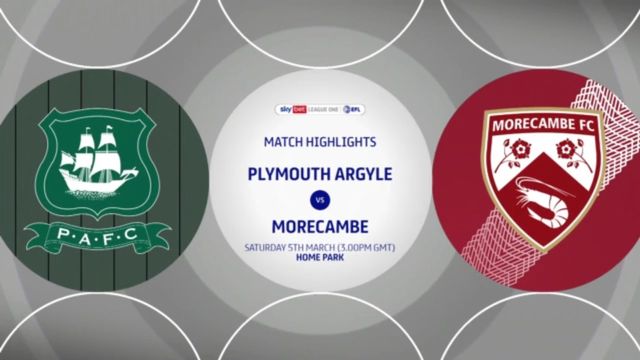 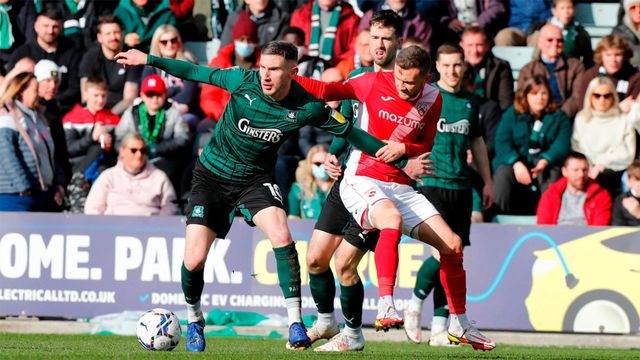