Take two. The Shrimps are heading back to Shrewsbury Town on Tuesday 15 March in Sky Bet League One.

After last month’s fixture was postponed due to a waterlogged pitch, the lads are travelling down to Shropshire for the second time.

Morecambe are coming into tonight’s clash following a 3-1 loss on home soil against Cheltenham Town. Liam Sercombe opened the scoring a minute before the half time whistle, and in the first few minutes of the second half, Callum Wright’s close-range shot put the Robins 2-0 up. After a goalmouth scramble, it was Greg Leigh who managed to pull one back for the home side six minutes later, but Alfie May’s 80th minute goal secured all three points for the visitors.

Since 2002, Morecambe have met the Shrews 15 times with meetings in League One, League Two, the FA Cup and the LDV Vans Trophy. The Shrimps have won five of those meetings, including this season’s reverse fixture at the Mazuma Stadium when an Adam Phillips penalty and a close-range Cole Stockton strike ensured a 2-0 victory. Three meetings between the two teams have ended with the spoils shared and Shrewsbury Town have won seven.

Steve Cotterill’s side are currently sitting in 18th place, six points clear of the drop zone, and they have one win, three losses and six draws in last the last 10 games. Their last fixture, over the weekend, was at home to Oxford United which saw the visitors win 2-1.

As a player, Steve Cotterill began his senior career with his hometown club Cheltenham Town before going on to represent Burton Albion, Wimbledon, Brighton & Hove Albion and AFC Bournemouth. The striker hung up his boots following a nine-year career to take up management, beginning at Sligo Rovers in 1995.

Cotterill returned to Cheltenham Town as manager where he won the FA Trophy, Conference and the Third Division Play-Offs in 2002. The 57-year-old also won League Two with Notts County as well as League One and the Football League Trophy with Bristol City. Cotterill was appointed Shrews boss in November 2020 following his dismissal from Birmingham City.

Defender Matthew Pennington came up through the ranks at Everton’s Academy and represented England at U19s level. Pennington has been part of Everton since he was nine years old, and spent time on loan at clubs such as Tranmere Rovers, Leeds United, Ipswich Town and Hull City. In December 2020, he was signed to Shrewsbury Town for the remainder of the season, before making the move permanent a year later.

The 2020/21 Fan’s and Player’s Player of the Season Josh Vela arrived at Montgomery Waters Meadow in January 2020 from Hibernian. The 28-year-old, who can play in midfield and defence, progressed through Bolton Wanderers’ Academy, and went on to make over 150 appearances for the Club. After a short loan stint at Notts County, Vela made the move to the Scottish Premiership to join Hibernian where he made nine league appearances before returning to England.

Elliott Bennett spent his youth career at Wolverhampton Wanderers before kickstarting his senior career with the Midlands side. During his stay at Molineux, Bennett also spent time on loan at Crewe Alexandra and Bury respectively. The 33-year-old went on to play for clubs such as Brighton and Hove Albion, Norwich City and Bristol City, before making the move to Championship club Blackburn Rovers in 2016. Bennett went on to make 192 appearances for the East Lancashire side, before leaving in June 2021 to join the Shrews.

Morecambe's trip to Shropshire sees Derek Adams take charge of his fifth game for the Shrimps since arriving back as manager last month.

Ahead of the encounter, the gaffer says he expects a tough clash for his side.

“They’ve changed their shape on Saturday, they started in a 3-4-3 formation and then they changed to a 3-5-2, they’ve played the majority of their time that way this season," he said.

“They’ve been able to pull away from the bottom four and it looks like they’re nearly safe now.

“It’s a tough encounter, they’ve got a number of really good players."

Darren Drysdale will be the man in the middle on Tuesday night and will be assisted by linesmen Peter Gooch and Adam Ricketts. Kevin Morris takes the role of Fourth Official.

The Lincolnshire-born referee has taken charge of 28 games so far this season and has handed out 95 yellow cards and three red cards.

Drysdale has been refereeing since 1988, officiating in the Northern Alliance, Northern Premier League, the Football League, and Conference North before progressing to the Premier League as an assistant in 1998. He has officiated a handful of Morecambe matches over the years, the last time being our 2-1 away win at Fleetwood Town in November 2021.

Can’t make it to the Montgomery Waters Meadow to back the boys against Shrewsbury Town on Tuesday night?

Two goals apiece from Luke Leahy and Daniel Udoh, alongside one from Ryan Bowman gave Shrewsbury Town all three points at the Montgomery Waters Meadow.

The first real chance of the half fell to the home side on the 23rd minute of the game, some good work down the right-hand side by Josh Vela saw him beat Liam Gibson before firing a ball into the box where Ryan Bowman was situated, thankfully for the Shrimps his effort was over the bar.

Nine minutes later the Shrimps should have pulled ahead.

Some fantastic work by Cole Stockton saw him evade a few defenders before drilling a cross into the area, after adjusting his run, Aaron Wildig got to the ball first but could not keep his shot down and it flew over the crossbar.

The hosts took the lead a minute before the break when George Nurse’s ball down the corridor of uncertainty was blasted home by Udoh who had ghosted into the box.

The Salop doubled their lead two minutes after the break when referee Darren Drysdale pointed to the spot after judging that Jacob Bedeau handled in the area. Leahy stepped up and sent Trevor Carson the wrong way.

On the 51st minute, the home side scored their third through Leahy. After picking the ball up on the edge of the Shrimps box, the wing-back swivelled and produced a half-volley of the highest standard which found the top-left of Carson’s goal.

Five minutes after the hour mark the home side had their fourth, a ball over the top saw Udoh shake off Anthony O’Connor before smashing the ball off the underside of the crossbar, to extend their lead.

It was 5-0 moments later after Bowman nodded home from close ranger from a Leahy free-kick.

There was one final chance for Derek Adams’ side through Stockton, but his right-footed curler had too much loft on it and ended up in the travelling Shrimps fans behind the goal.

Tickets for our rearranged fixture are now on sale for our Sky Bet League One game against Shrewsbury Town.

Tickets are available in the DM Recruitment Stand.

Supporters who purchased tickets for the original date, those tickets will be accepted for the rearranged date.

Tickets will be available to buy on the day from Shrewsbury Town CASH ONLY [subject to availability], though we are encouraging supporters to buy in advance from Morecambe FC to avoid delays on the day.

Postage will be an option for this fixture, but you must choose this at the point of purchase, and all tickets to be posted must be purchased before Wednesday 9, 12noon. We also have the options of collecting your match tickets from the Morecambe FC Club Shop in advance of the game or from the Away Ticket Office on the day. Again, these must be selected at the point of purchase.

Sales for this fixture will end Monday 14 Mar, 12noon.

*Note: Those purchasing under 12 tickets must be accompanied by someone over the age of 18. 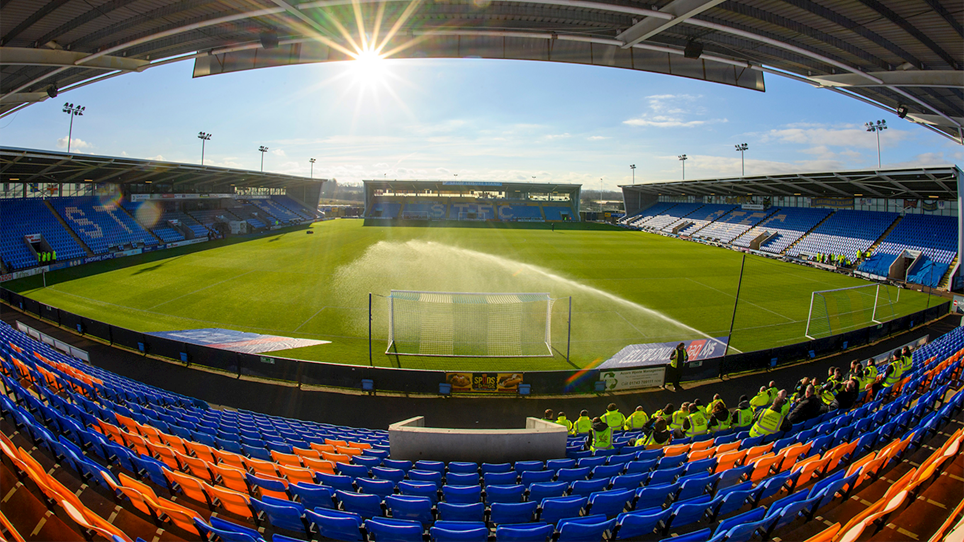 
Tickets are now on sale for our Sky Bet League One fixture against Shrewsbury Town. 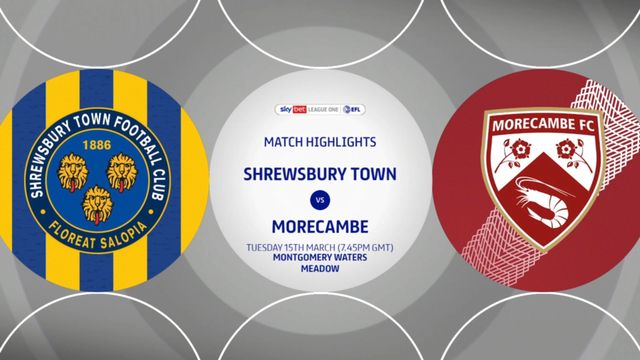 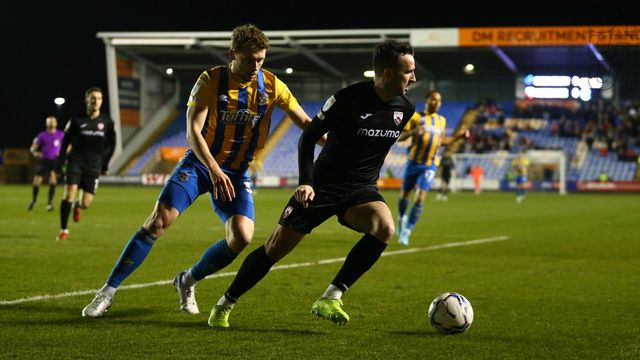