The Shrimps return to Sky Bet League One action on Saturday when they travel to Highbury Stadium to take on Fleetwood Town.

Morecambe were last in league action on 2 November when they were beaten 2-0 by Cambridge United at the Mazuma Stadium. Since then, they have progressed to the Second Round of the FA Cup after beating Newport County 1-0 at home and were condemned to a 2-0 defeat in the Carabao Cup against Carlisle United.
The two sides have met seven times over the years in the league/Football League Trophy with the Shrimps coming out on top in two of those meetings. The spoils were shared once between the teams with Town winning the other four games.
The Opposition
Form Guide
Fleetwood Town have suffered a difficult start to the League One season and sit inside the relegation zone in 22nd. They’re without a win in their last four league games and suffered defeats in both the FA Cup and Papa John’s Trophy recently.
As a player, Simon Grayson came through the youth setup at Leeds United before joining Leicester City where he went on to make nearly 200 appearances. The right-back spent time at Aston Villa and Blackburn Rovers, as well as a number of other clubs on loan.
Grayson signed for Blackpool in 2002 and made 126 appearances for the Seasiders before hanging up his boots to focus on coaching at the club. The 51-year-old went on to manage Leeds United, Huddersfield Town, Preston North End, Sunderland and Bradford City before returning to Bloomfield Road for a second spell.
Grayson was appointed Fleetwood manager in January 2021 after the departure of Joey Barton.
Simon Grayson’s pre-match thoughts
Town manager Simon Grayson said he hopes the atmosphere at Saturday’s game is a buoyant one.
"We know how much this game means to the fans, so we have to start on the front foot and to start confidently, it hasn't been easy at home recently because there isn't many conditions like you get at Highbury many other places in the league,” he said.
"To get promoted proved everyone wrong and they have had some body blows, they had momentum at the start of the season and have dropped off a bit, but we cannot underestimate them as they do have some really good players.
“We have to make sure we are turned on because we want to win all of our local derbies - every game we analyse strengths and weaknesses of the opposition and we respect every team the same as we learn about them, no matter the distance of them to us."
Town’s key players
This season’s top scorer so far Danny Andrew has six goals to his name along with three assists. The left-back is in his second spell at the club after making 16 appearances for the Cod Army between 2014-2016. He has also spent time at Cheltenham Town, Grimsby Town and Doncaster Rovers among a number of other clubs. He returned for his second spell at Highbury in 2019 and has made nearly 90 appearances since he came back.
Striker Joe Garner is well known for his time at Preston North End where he played under current Town boss Simon Grayson. In the league and cup, the striker scored over 50 goals for PNE and joined Fleetwood Town in August this year on a free transfer.
21-year-old Callum Morton is on loan with the Cod Army from West Bromwich Albion. He helped Northampton Town win the League Two play-offs in 2020, scoring twice in the semi-final and once in the final. Morton joined Fleetwood on loan in July 2021 and has scored four goals for the club this season along with three assists to his name.
Shrimps’ pre-match thoughts
Morecambe boss Stephen Robinson said that he believes Fleetwood are a good side despite what their league position might suggest.
“They’ve got good players, I believe they’re in a false position in the league, I’ve watched a lot of their football and a lot of their games, and they’ve got a very good manager,” he said.
“We go, and we know if we play how we can play, then we can be competitive with anybody.
“It’s huge, we know we want to win the game, our recent form, we had a good result in the cup, we want to take that performance rather than the Papa John’s performance into Saturday.”
Meet the men in black
Lincolnshire-based Darren Drysdale will be the man in the middle on Saturday afternoon. He will be assisted by linesmen Anthony Moore and Simon Clayton, along with fourth official Billy Smallwood.
Drysdale has taken charge of 13 games this season in the league and cup and has handed out 49 yellow cards and two red cards.
He last took charge of the Shrimps in May this year when they beat Tranmere Rovers 2-1 at Prenton Park in League Two.
Don’t miss a kick with our iFollow coverage
After teaming up with Beyond Radio for the 2021/22 season, supporters will be able to listen to exclusive, full and uninterrupted radio commentary of every single game, home and away, which will be broadcast simultaneously across North Lancashire on 103.5 and 107.5FM, as well as on the iFollow Shrimps platform.
Joining host Dave Salmon is Ryan Daly, the club's Head of Media and Communications, audio passes are available from as little as £2.50 per match, £4.49 for a monthly pass or £45 for a season pass.
As well as full match commentary, the ‘Shrimps Verdict’ podcast will be available post-match, featuring online, on demand content, including audio match highlights, post-match interviews and reaction, and the chance for supporters to have their say.

The Shrimps come away from Highbury with all three points after a 2-1 win over Lancashire rivals Fleetwood Town.

It was an even start to the game, with both sides trying their chance on goal, and the first big chance came on six minutes and fell to the way of the hosts as a deflected shot from Jay Matete sent the ball behind for a corner, which came to nothing.

Five minutes later and Morecambe found the breakthrough following a foul on Arthur Gnahoua just outside the box, up stepped Hull City loanee Callum Jones who fired the ball into the bottom corner, leaving Alex Cairns no chance.

Cole Stockton came agonisingly close to doubling Morecambe’s advantage on 15 minutes after doing well to bring the ball down and turning the defender, but his strike was saved by a fully stretched Cairns.

Stephen Robinson’s men continued to pile on the pressure and, on 22 minutes, Gnahoua did well to pick the pocket of the defender, but the angle was too wide as the ball rolled across the face of goal.

After 30 minutes, the Cod Army picked up the pace and tried to breakthrough a very strong Morecambe defence, but the back line stood tall and refused to give way.

Two minutes from the half time whistle and Ged Garner found himself in time and space on the ball and looked to curl one beyond Jokull Andresson, but there was too much pace on the shot.

It was Town who carved out the first chance six minutes into the second half after Garner received the ball inside the box, but his first time effort reached the back of the stand.

The Shrimps went in search for a second and came close when Jonah Ayunga tried his luck on the angle, but was blocked by a defender.

A flurry of Fleetwood corners followed, but Morecambe’s defence stood firm, as Andresson rose highest to claim the ball and eliminate any danger.

As soon as the fourth official held the board up to confirm four minutes of added time, Morecambe’s tempo and efforts increased once more as they went in search of a deserved winner, and it paid off.

Stockton brought the ball down after overpowering the defender before taking one look up to see the goalkeeper off his line, which was enough for the 27-year-old to attempt an outrageous strike from his own half which sailed over Cairns and nestled in the back of the net to secure the three points for Morecambe.

We are back at home again on Tuesday night as we face Charlton Athletic in Sky Bet League One.

Tickets are now on sale for our Sky Bet League One game against Fleetwood Town FC.

As we expect demand to be high for these tickets, there will be a priority purchase window in place for 2021/22 Season Ticket holders.

This will run from now until 5pm Thursday 11 November. Tickets will be limited to ONE per 2021/22 Season Ticket holder.

The easiest way to buy tickets is online, via ticketsmorecambefc.com. This must be done by the person who originally purchased your Season Ticket and has an account linked to this, or the person who's details we have on record for the online account.

Tickets are also available to purchase in person at the Club Shop, on weekdays between 10am and 5pm, plus at Tuesday night’s fixture against Carlisle United. Note, you will be required to show your Season Ticket to buy a Fleetwood Town match ticket within the Season Ticket Holder priority window – the purchase will then be linked to your account.

Any remaining tickets will then go on general sale 10am on Friday 12 November.

Tickets will remain on sale, subject to availability, until 12 noon on Friday 19 November 2021, or until sold out if earlier. Tickets will be available to buy online and in person at the Club Shop.

All tickets bought online must be collected from Morecambe FC Club Shop or purchased before 12 noon on Friday 19 November, or by prior arrangement from the Fleetwood Ticket Office on the day of the game.

If any tickets still remain, these will be available to purchase on the day of the fixture at Fleetwood Town’s ticket office. This will be communicated to supporters towards the date of the game.

Tickets are available in the Percy Ronson Stand (Standing).

Tickets are available in the Parkside Stand (Seating). 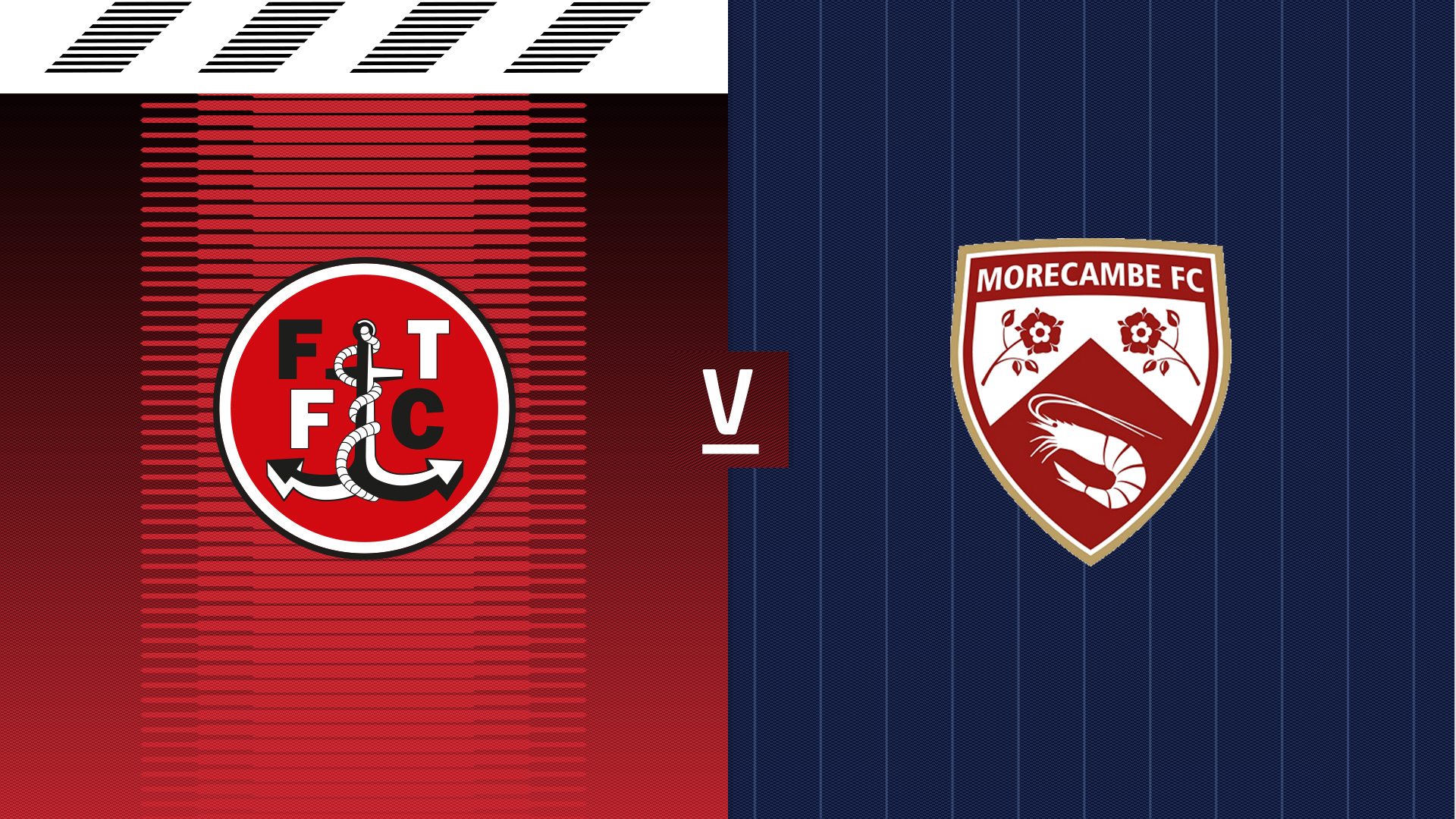 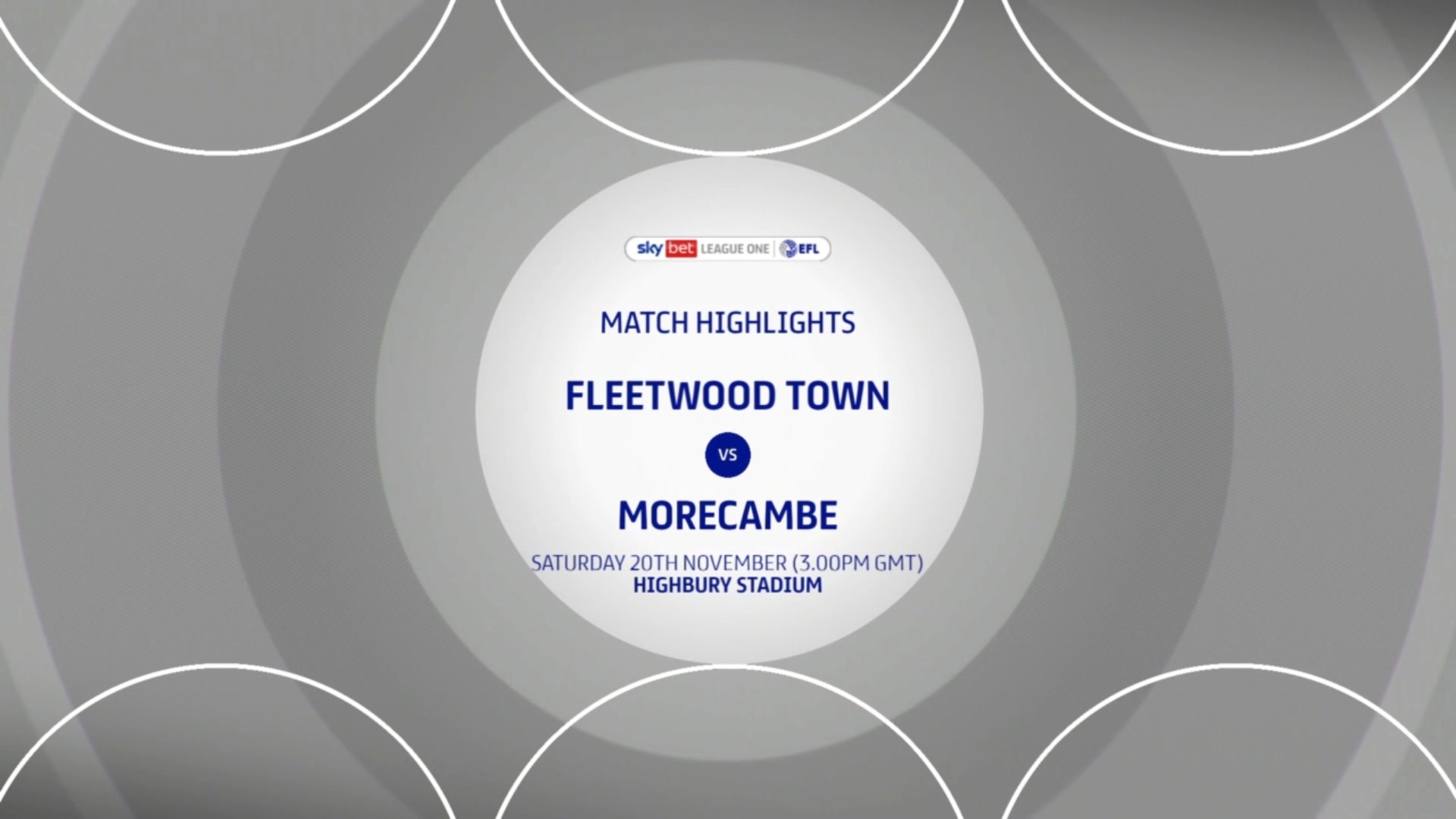 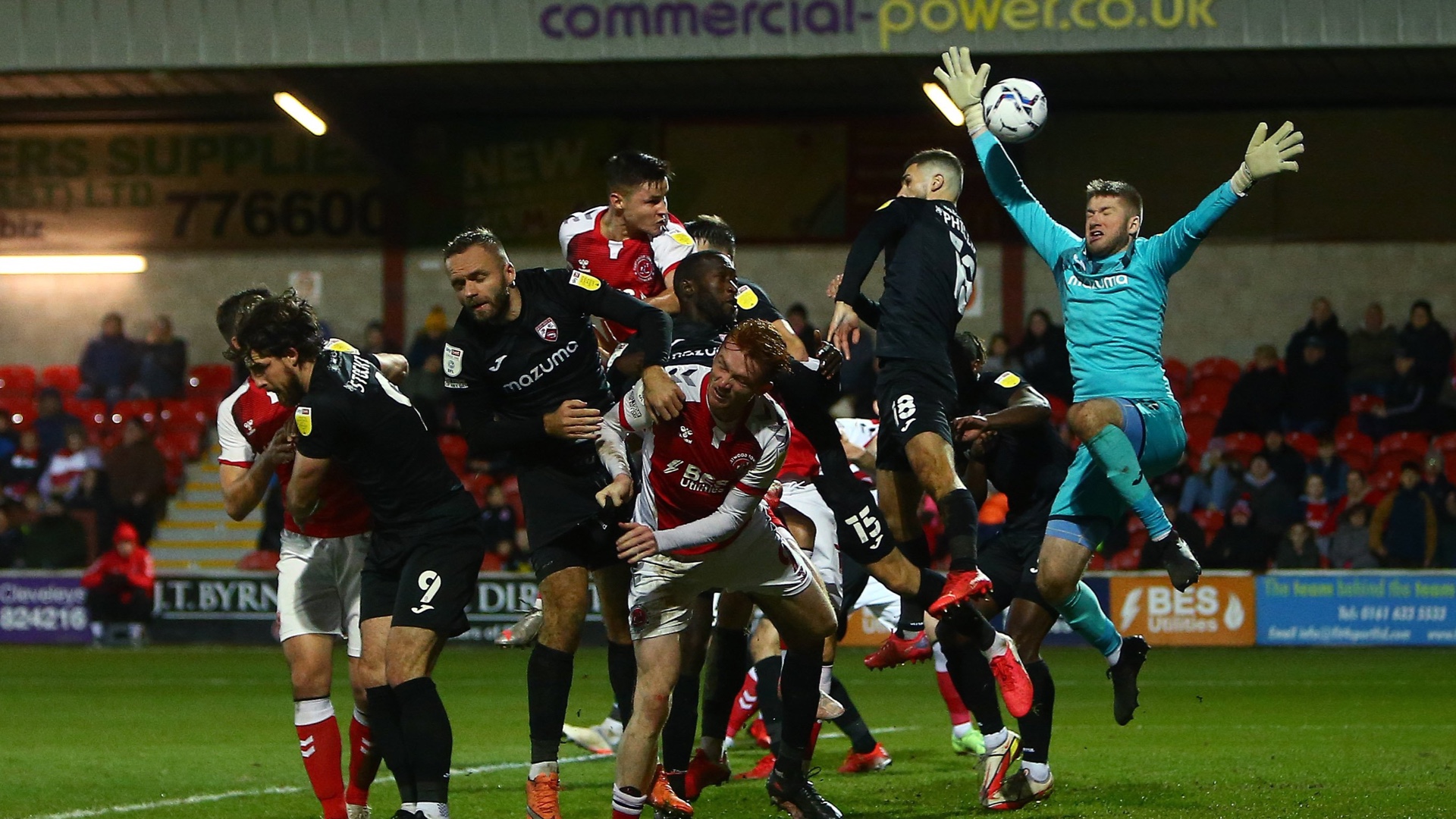