The Shrimps are in Papa John’s Trophy action on Tuesday when they host Carlisle United at the Mazuma Stadium.

Morecambe come into the game on the back of a 1-0 win over Newport County in the FA Cup First Round last weekend, second-half substitute Aaron Wildig scored with his first touch after 68 minutes.
Stephen Robinson’s side sit bottom of Group A after defeats to Hartlepool United and Everton U21s in the competition.
The two sides have met 21 times over the years with the Shrimps winning four of the encounters. The side from Cumbria have won 10 of the clashes and drawn the other seven. The Shrimps won the last meeting between the two sides 3-1 at the Mazuma Stadium with Aaron Wildig, Toumani Diagouraga and Cole Stockton all finding the back of the net for Morecambe.
The Opposition

Form Guide
Carlisle have had a difficult start to the season and sit inside the League Two relegation zone in 23rd position. They are without a win in nine games in the league, however they were victorious at the weekend against Horsham in the FA Cup.
As a player, Keith Millen made over 300 appearances for Brentford helping them win the Football League Trophy and Third Division title. He spent the latter of his playing career at Watford and then Bristol City. After retiring, he had two spells as caretaker manager at Bristol City before he was given the job permanently after Steve Coppell departed. Millen had three spells as caretaker manager at Crystal Palace and one at MK Dons before he made the switch to Sweden to take charge of Örgryte IS.
Last month, the 55-year-old was appointed Carlisle United boss after former manager Chris Beech was relieved of his duties following their poor start to the League Two season.
Keith Millen’s pre-match thoughts
The Carlisle boss said his side need to keep moving forward after their FA Cup victory on Saturday.
“I’m trying to stay calm on the side of the pitch but I’m praying every time we get in the box – please score, please score,” Miller said.
“I know what it’s like for the fans, it’s worse for the fans, because they can’t do anything about it.
"I can, in a way, from the touchline, but for the fans to stand there and feel the pressure and tension that’s in there, it’s just great for them to see the goal come and for them to go home happy and smiling.
“We just need to keep moving forward, you’d love to win every game but it’s probably not going to happen.
"At least we’ve got a direction and understanding of what we’re trying to do to make us better.”
United’s key players
24-year-old Joe Riley came through the youth setup at Manchester United and made his senior debut when he came on as a second-half substitute against Shrewsbury Town in the fifth round of the FA Cup in 2016. He spent time on loan at Sheffield United before joining Bradford City and then Carlisle United in 2020. Riley has gone on to make nearly 40 appearances for the Cumbrian side.
Midfielder Jon Mellish made nearly 60 appearances for Gateshead in the National League before singing for United in May 2019. During his time in the North East, he spent time on loan at Newcastle Benfield and was capped for England C twice. The 24-year-old has made over 70 appearances during his time at Brunton Park and has scored 13 goals.
Winger Jordan Gibson started his career in the youth setup at Rangers. After he was released, he joined Bradford City and spent time on loan at Stevenage before moving to Ireland to play for St Patrick’s Athletic and then Sligo Rovers. In August 2021, Gibson returned to England and signed for Carlisle.
Shrimps’ pre-match thoughts
Boss Stephen Robinson said his side want to build some momentum after victory over Newport County at the weekend.
“With the results, we want to get a bit of momentum, we want to build for Fleetwood so I will keep the team as unchanged as I can,” he said.
“We’ve got three boys away, Jökull [Andrésson], Alfie [McCalmont] and Greg [Leigh], so we’ll make those changes, but the boys coming in are good, good players, it gives them an opportunity.
“We will try and stay strong, and go and try to make it two wins in a row.”
Meet the men in black
Cleveland-based referee Ross Joyce will take charge of Tuesday night’s game with assistants Graeme Fyvie and Mark Cunliffe who will run the line. Aaron Jackson will be the fourth official.
Joyce has been the man in the middle twelve times this season, taking charge of fixtures in League One, League Two, the FA Cup, Carabao cup and Papa John’s Trophy. He has handed out 48 yellow cards and two red cards.
He refereed the League Two clash between the Shrimps and Carlisle United back in October 2020 when United came out 3-1 winners at Brunton Park.
Don’t miss a kick with our iFollow coverage

Two second-half goals from the visitors wrapped up all three points in our final Papa John’s Trophy game of the 2021/22 season.

A goal apiece from Jordan Gibson and Kelvin Mellor respectively inside 10 second-half minutes made sure the points would be heading back to Cumbria from the Mazuma Stadium.

On the 24th minute of the game, Toumani Diagouraga came close to opening the scoring.

A run into the penalty area by the midfielder saw him pass two players, selling them both with step-over, but his effort on goal flew wide of its intended target.

Six minutes short of the break, the Cumbrians had an effort of their own.

A corner into the Shrimps’ penalty area was nodded down by Morgan Feeney in the direction of Tristan Abrahams who tried a speculative over-head kick, but his effort was lacking any direction.

Cole Stockton had the game’s next opportunity, a through ball from Jonah Ayunga found the striker in space, but his effort could only find the hands of Mark Howard in the Carlisle goal.

The first chance of the second-half resulted in a goal from substitute Gibson, who replaced Zach Clough after the break for the visitors. A direct free-kick managed to fly past Da Silva Mendes in the Shrimps goal to give Carlisle the lead.

The Cumbrians made it 0-2 moments later, a corner in from the right was headed down by Feeney and there was Mellor to tap-in at the far post.

On the hour mark, the Shrimps had the ball in the back of the net themselves, however celebrations were cut short by the linesman on the far side, as he put up his flag to deny Stockton after an effort from Ayunga was saved by Howard.

There were chances for Ayunga and Adam Phillips as the game went on, however their efforts were wide of the mark.

Tickets are now on sale for our Papa John's Trophy fixture against Carlisle United.

Tickets are available in the Bartercard Stand and Wright & Lord Stand. The MGS Terrace will not be open for this fixture. Season ticket holder priority window will run until Tuesday 10am for season ticket holders to secure their seat(s).

Any seats not secured by season ticket holders will be released back to general at 10am Tuesday morning. 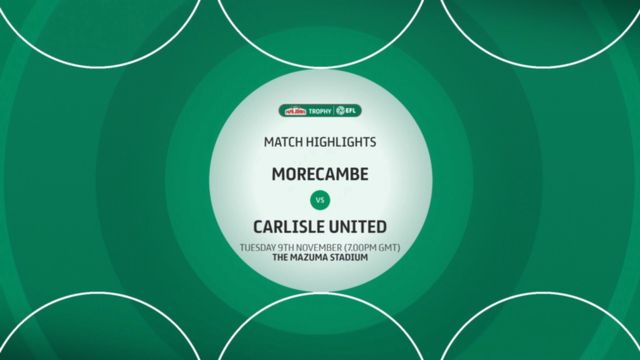 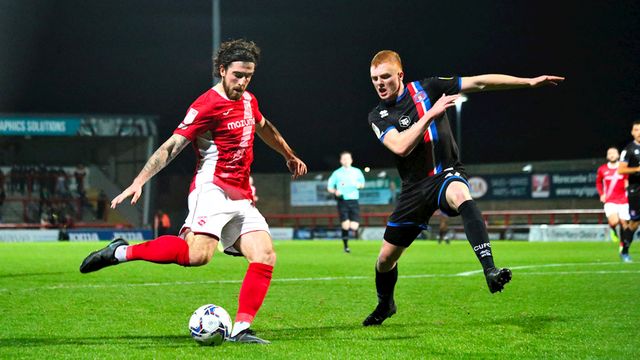