The Shrimps resume their Papa John’s Trophy Northern Group A campaign with a visit to Victoria Park to face Sky Bet League Two side Hartlepool United.

In the opening game of the competition, Stephen Robinson’s men fell to a narrow home defeat at the hands of Everton U21s, with Sean McAllister securing the points for the Merseyside club on the night. Dave Challinor’s side also tasted defeat against Carlisle United which saw an entertaining 3-3 draw go to penalties with the Blues edging the shootout by four goals to three.

The two sides have met in EFL-related competitions on 10 occasions, with the Shrimps winning three of those meetings, drawing one and losing six. The most recent game came in the FA Cup in November 2017 where Jim Bentley’s men overcame the County Durham outfit 3-0 at the Globe Arena, with goals coming from Kevin Ellison, Andy Fleming and a Scott Loach own goal.

Hartlepool United enjoyed a largely successful 2020/21 campaign, resulting in a Play-Off Final win over Torquay United, that saw the club promoted to Sky Bet League Two, their first time in the fourth tier of English football since 2017.

After their opening 10 league games, the Victoria Park side currently sit in 13th position after winning four, drawing two and losing four. Notable results include an opening day victory over Crawley Town, a 2-0 home win against Walsall as well as a 1-0 triumph over Bristol Rovers, who were relegated from League One last season.

Dave Challinor was appointed manager in November 2019 following eight years at AFC Fylde. Since arriving at Victoria Park, the 46-year-old has taken charge of 81 matches. Of those, he has won 38, drawn 20 and lost 23. Under his tenure, he has seen his side score 128 goals and concede 99, totalling 134 points which averages out at 1.65 points per match.

Ahead of the cup clash, Chester-born Challinor says he hopes the changes he makes will give players the opportunity to impress.

He said: “Most of the forward players that didn’t play today [Saturday] will start the game.

“If they go into that game and they produce a performance physically that we want, and technically, tactically what we want, and they put the ball in the goal or play a part in us being successful, then there’s a good chance that they’ll start on Saturday.

“We’re at a point now where, the crooks of it is, we need to start sticking the ball in the back of the net more frequently with the players we’ve got on the pitch.”

Left midfielder Tyler Burey currently tops the leading goalscoring table for Pool, with three goals in five League Two appearances. The 20-year-old is currently on-loan from Millwall on a deal that runs until January. Despite his age, Burey already boasts 14 Championship appearances to his name, accruing over 140 minutes of second tier football for the Lions.

20-year-old Matty Daly joined the County Durham side on a season-long loan from Championship side Huddersfield Town. The attacking midfielder has played twice for the Terriers in the Premier League as well as nine times in the Championship, scoring once against Charlton Athletic. The Stockport-born man has also represented England at youth level on nine occasions, scoring once for the U17s.

Experienced defender Luke Hendrie signed for Hartlepool in August 2021 following a two-and-a-half year stint with Grimsby Town. The 27-year-old 6ft 2 man has accumulated over 220 career appearances to date, 32 of which came in the Scottish Premiership for Kilmarnock. The Leeds-born man also made three appearances for England U17s in 2010.

Stephen Robinson says that, whilst he will be making changes to his starting XI, said changes will be essential and will provide players with the opportunity to impress.

“The changes that I make are a necessity, they have to get game time, this is a tough league, it’s non-stop, and we have to have people ready to go when we need them, so I will make a lot of changes.

“All boys that I believe should be in our first team anyway, and a couple of the younger boys will play, and give them game time.”

The Pools initially took the lead through Maty Daly but goals from Shane McLoughlin and Callum Jones turned the game on its head before the break. Daly found himself on the scoresheet again seven minutes from time as he netted from a Luke Molyneux cross.

On the second minute the hosts should have been ahead, a through ball found Mark Cullen who had broke free of the Shrimps defence, but the big frame of Jokull Andresson denied the striker the opening goal of the game.

The hosts did make their pressure pay after eight minutes, a run down by Jordan Cook saw him pull the ball back to Daly who had the easy job of firing the ball home.

Stephen Robinson’s side pulled back level just after the half-an-hour mark, a ball forward from Ryan Cooney found McLoughlin on the run, and his inch-perfect lobbed attempt was too much for the goalkeeper and the retreating defender to do anything about.

On the 39th minute the Shrimps were in-front, a clipped ball into the box would have found Jonah Ayunga but a pull back from Reagan Ogle saw Augyna go down in the penalty area, giving referee Simon Mather no choice but to point at the spot.

Up stepped Jones who dispatched his spot-kick superbly, giving Mitchell in the Pools net absolutely no chance.

Dave Challinor’s men should have squared the game up with the first real opportunity of the second period.

A corner from the left managed to find its way all the way to the back stick where Pools captain Neill Byrne was placed, but the big centre-half could not sort his feet out and skied his effort over the bar from three-yards out.

On the 68th minute the Pools came close again, this time an effort from Cullen narrowly missing Andresson’s right post.

The home side’s pressure would pay off seven minutes from time, substitute Molyneux was a handful after coming on in the 72nd minute, his cross into the box found Daly in space once again, who managed to notch his second of the game.

Molyneux nearly provided the game’s fifth goal of the game with a superb effort on the angle, but a smart save from Andresson denied him.

With the game heading towards penalties, there was enough time for one last huge opportunity for the hosts, with Andresson taking down Mike Fondop in the penalty area in stoppage time.

Up stepped Molyneux, but his effort cannoned off the crossbar and over the stadium.

Missed penalties from Shane McLoughlin and Arthur Gnahoua helped the home side to a 4-2 penalty on the night, and in turn picking up the extra bonus point on offer. 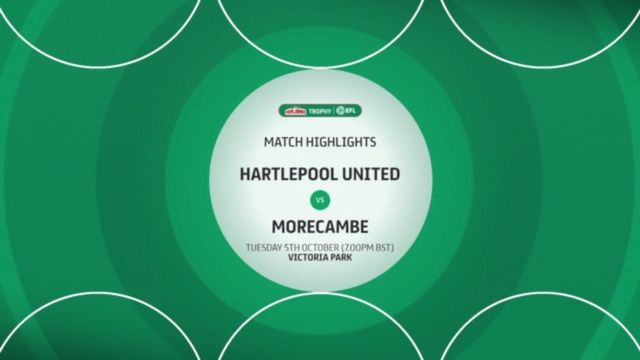 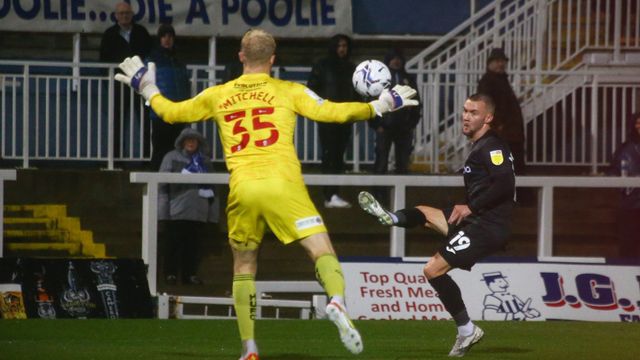