The Shrimps return to action on Saturday 23 October at the Mazuma Stadium when they take on league leaders Plymouth Argyle in Sky Bet League One.

In midweek, Stephen Robinson’s men slipped to a 3-1 defeat on the road against Cheltenham Town. Liam Sercombe opened the scoring for the hosts before the Shrimps struck back through Adam Phillips. A three-minute brace from Kyle Joseph in the second half proved the difference between the two sides as Michael Duff’s men came out victorious.
Out of 13 League Two meetings between the two sides, Argyle have had the upper hand, winning seven of the encounters. The Shrimps have come out on top three times with the spoils also being shared on three occasions. The last time the two sides met was in December 2019 at Home Park when the Pilgrims won 3-0, however last time Plymouth visited Morecambe in 2016, the Shrimps sealed a 2-1 victory with goals from Michael Rose and Peter Murphy.
The Opposition
Form guide
Saturday’s opponents come into the game one point clear at the top of the division and will look to go 14 games unbeaten in League One. They’ve tasted defeat just once this season which was on the opening day away at Rotherham United. The Pilgrims have won three games on the spin, most recently beating Bolton Wanderers 3-0 in midweek.
As a player, Ryan Lowe plied his trade in the lower leagues, representing the likes of Shrewsbury Town, Crewe Alexandra and Sheffield Wednesday. He had three spells at Bury- one as player coach before hanging up his boots to concentrate on his managerial role. Lowe was unveiled as Plymouth manager in June 2019 and at the first time of asking, guided them to a third-place finish in League Two in what was a season interrupted by COVID.
Ryan Lowe's pre-match thoughts
The Plymouth Argyle manager said he’s looking forward to facing the Shrimps on Saturday.
“They’ve had a decent enough start, scored loads of goals, they’re conceding goals as well but they’re going to be a threat in different departments and it’s one we’ve got to be ready for,” Lowe said.
“The camp is all good and I don’t see why it shouldn’t be really, where we are in the league and the games we are winning.”
Argyle’s key players
24-year-old Ryan Hardie arrived at Home Park initially on a loan basis before he put pen to paper to sign permanently in January 2021. The Scotsman came through the youth system at his boyhood club Rangers where he made 13 first team appearances and spent time out on loan at a number of clubs. He made the move to Blackpool and scored his first goal for the club against the Shrimps in an EFL Trophy tie in September 2019. Hardie has been among the goals this season, having found the back of the net ten times so far this campaign.
Versatile wing-back Joe Edwards is in his third season at Home Park and was named Player of the Season last year. The 30-year-old is yet to get his name on the scoresheet this season, but contributed with eight goals last term and has proved a key player for the Pilgrims.
Last season’s top scorer Luke Jephcott is one of Argyle’s own after progressing through their academy following time at Wendron United and Helston Athletic. The 21-year-old has been capped for Wales U19s and U21s respectively.
Shrimp’s pre-match thoughts
Manager Stephen Robinson said his side have to be brave when they take on the league leaders at the Mazuma Stadium on Saturday.
“We know what we need to do to change, we’re looking forward to Plymouth, I think it’s a great game to play in, top of the league, prove people wrong and show how good a team we are,” Robinson said.
“Without being cavalier and leaving the pitch open, we need to go and take the game to Plymouth, we have to be brave.
“When we've done that, we took it to Ipswich, we took it to Sheffield Wednesday, we took it to Rotherham, albeit we didn’t win that game, but we have to be brave, I think we’ve got good, good footballers.”
Meet the men in black
Marc Edwards will take charge of Saturday’s game and assistants Joe Simpson and Anthony Moore will run the line. Richard Woodward will be the fourth official.
The Tyne and Wear man has taken charge of eight games so far this season and has issued 26 yellow cards and one red. He took charge of the thrilling encounter between the Shrimps and Accrington Stanley earlier this season which finished 3-3. Morecambe were reduced to ten men in the 38th minute when Shane McLoughlin was handed a straight red card.
Don’t miss a kick with our iFollow coverage
After teaming up with Beyond Radio for the 2021/22 season, supporters will be able to listen to exclusive, full and uninterrupted radio commentary of every single game, home and away, which will be broadcast simultaneously across North Lancashire on 103.5 and 107.5FM, as well as on the iFollow Shrimps platform.
Joining host Dave Salmon is the club’s media assistant Matt Smith, audio passes are available from as little as £2.50 per match, £4.49 for a monthly pass or £45 for a season pass.
As well as full match commentary, the ‘Shrimps Verdict’ podcast will be available post-match, featuring online, on demand content, including audio match highlights, post-match interviews and reaction, and the chance for supporters to have their say.

Morecambe 1-1 Plymouth Argyle
Sky Bet League One
The Mazuma Stadium
Saturday 23 October 2021
Kick-Off: 3pm
Attendance: 4272 (658 Plymouth Argyle fans)
The Shrimps earned a point against high-flyers Plymouth Argyle in an entertaining 1-1 draw at the Mazuma Stadium.
Jonah Ayunga put the Shrimps ahead inside the opening six minutes however Ryan Lowe’s men levelled six minutes later through Danny Mayor. Morecambe pushed on in the second-half, but failed to find a breakthrough and the points were shared.
The first real chance of the first-half resulted in a goal through Ayunga, who drilled into the far corner past Michael Cooper after Ryan Cooney saw his effort blocked.
The winger looked to extend his side’s lead a few minutes later when he tested the Pilgrims’ ‘keeper from just inside the area.
The league-leaders hit back in the 12th minute after a goalmouth scramble. The ball was squared to Ryan Hardie whose strike was cleared off the line before it fell to Mayor who slotted home.
The visitors nearly went ahead a few minutes later when the Shrimps back-line were forced to clear another ball off the goal-line. Goalscorer Mayor beat his man and squared the ball to Luke Jephcott who saw his close-range effort cleared off the line.
Jephcott had another chance to put his side ahead but the striker fired over the upward.
Shrimps’ goalkeeper Jokull Andresson produced an impressive double-save just before the half-hour mark to prevent Morecambe from going behind. The stopper palmed Mayor’s strike to his left before keeping out Panutche Camara’s close-range shot, who was in the end flagged offside.
The Pilgrims enjoyed more success down the left-hand side in the 42nd minute as Grant cut inside and had his effort cleared by Stephen Robinson’s men.
Half-Time: Morecambe 1-1 Plymouth Argyle
The Shrimps were presented with an excellent chance to take the lead seven minutes into the second-half, when Ayunga’s excellent cross from the right found the feet of Cole Stockton, who lifted his shot just above the crossbar.
Cooney unleashed an ambitious effort just before the hour mark which sailed over the bar.
Toumani Diagouraga battled his way through the midfield to feed Ayunga who would have been through on goal, however the ball was overhit and rolled into the palms of Cooper.
In the 84th minute a Shrimps free-kick headed on by Stockton which didn’t quite fall to Ryan Delaney was collected by the goalkeeper, but it wasn’t to matter because the linesman had his flag up for offside.
There was a late scare for Morecambe deep into added time when Conor Grant’s deep corner found Dan Scarr who headed the ball down towards Jordan Houghton, however the Pilgrims man fired wide.
Full-time: Morecambe 1-1 Plymouth Argyle
Morecambe: Andresson, Leigh, O’Connor (C), Jones, Diagouraga, Stockton, Delaney, Ayunga (McDonald 82’), Phillips (Price 90+3), Cooney, Gnahoua
Subs not used: Letheren, McLaughlin, Mensah, Gibson, Harrison
Goals: Ayunga 6’
Bookings: Jones 65’
Red Cards: None
Plymouth Argyle: Cooper, Houghton, Wilson, Scarr, Edwards (C), Hardie (Garrick 73’), Mayor, Grant, Galloway, Camara (Broom 63’), Jephcott (Agard 73’)
Subs not used: Burton, Gillesphey, Randell, Law
Goals: Mayor 12’
Bookings: Houghton Galloway
Red Cards: None

Tickets are now on sale for our Sky Bet League One game against Plymouth Argyle. 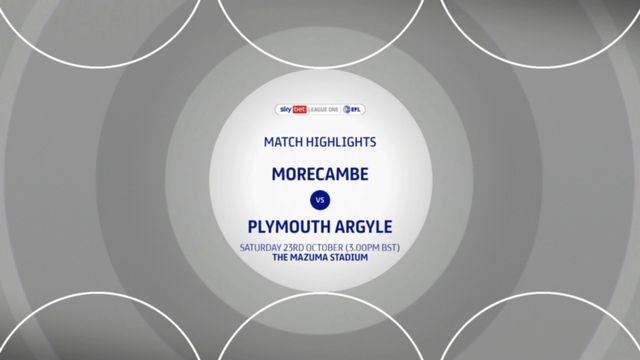 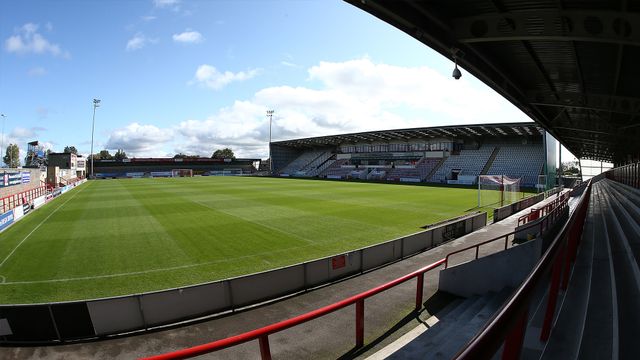