The Shrimps travel to the Kassam Stadium to face Oxford United in Sky Bet League One on Saturday 30 October.

The Opposition
After earning a point on home soil against league-leaders Plymouth Argyle on Saturday, the Shrimps are back on the road this weekend as they take on Oxford City in Sky Bet League One.
Out of 13 meetings between the two sides, Morecambe have won just two, one in March 2012 and the other in August 2014. The U’s have won five, including the last meeting between the two teams which was a 4-2 victory in February 2016. This will be the first ever League One clash between the two.
Form guide
Last season, Oxford finished sixth in League One, but were beaten in the Play-Off Semi-Finals by eventual winners Blackpool. Ahead of Saturday’s game, they currently sit sixth with two wins out of their last two games.
As a player, Karl Robinson plied his trade in non-league after he left Caernarfon Town in the Cymru Premier. He played as a striker/midfielder and represented the likes of Bamber Bridge, Marine, Oswestry Town, among others. The 41-year-old made the switch to management in 2010 and spent six years at MK Dons, before spending two years at Charlton Athletic. Robinson was appointed United boss in March 2018.
Karl Robinson’s pre-match thoughts
The Oxford boss has missed his side’s last three games after he tested positive for coronavirus, however he is set to return to the dugout on Saturday for the visit of the Shrimps, and said he’s looking forward to the game.
“I’ve come back today, loved being on the training pitches again and can’t wait to get back to the match on Saturday,” Robinson said.
“It’s not going to be easy, Morecambe are well managed; we did a coaching course together a while back and I’m pleased to see Stephen doing well there.”
United’s key players
32-year-old James Henry is currently leading goalscorer for the U’s with six goals so far this campaign. The Reading youth product spent time at a number of clubs on loan before joining Millwall on a permanent basis in 2010 following two loan spells. After signing for Wolverhampton Wanderers, Henry joined Oxford United in 2017 and is approaching 50 goals scored for the club.
U’s academy product Matty Taylor rejoined Oxford in 2020 after over ten years away. During this time, the striker went on to play for Forest Green Rovers, Bristol Rovers and Bristol City, among others. This season, the 31-year-old has got his name on the scoresheet five times to-date.
Defender Sam Long was last year’s Player of the Year and earned himself a place in the Sky Bet League One team of the season. The 26-year-old has been known to get forward from defence at times and scored six goals last season. He progressed through the club's academy and signed a new three year deal in April this year.
Shrimps’s pre-match thoughts
Shrimps' boss Stephen Robinson was impressed with his side’s performance on Saturday when they were held to a point by high-flyers Plymouth.
“We pressed really well, we passed the ball, you control the game when you’ve got the ball, not when they’ve got the ball, and out of possession as well, I thought we were very good,” he said.
“Karl [Robinson] has built that team over a period of time, and probably what we’re trying to emulate really.
“We’re trying to get to that stage where we’ve got a squad as strong as him, we’ve got an identity and a style like Oxford, and it’s a good club to aim for really.”
Meet the men in black
Lee Swabey will take charge of Saturday afternoon’s match with assistants Stephen Brown and Anthony Da Costa running the line, Marc Wilson will be the fourth official.
The Devon-based referee has been the man in the middle eight times this season and has handed out 16 yellow cards so far.
Swabey handed out his first red card of the season earlier on this month when he refereed Gillingham vs Sunderland in League One.
He last took charge of the Shrimps in May 2021 when they won 2-0 away at Walsall in League Two.
Don’t miss a kick with our iFollow coverage
After teaming up with Beyond Radio for the 2021/22 season, supporters will be able to listen to exclusive, full and uninterrupted radio commentary of every single game, home and away, which will be broadcast simultaneously across North Lancashire on 103.5 and 107.5FM, as well as on the iFollow Shrimps platform.
Joining host Dave Salmon is the club’s media assistant Matt Smith, audio passes are available from as little as £2.50 per match, £4.49 for a monthly pass or £45 for a season pass.
As well as full match commentary, the ‘Shrimps Verdict’ podcast will be available post-match, featuring online, on demand content, including audio match highlights, post-match interviews and reaction, and the chance for supporters to have their say.

Goals from Steve Seddon, Mark Sykes and Matty Taylor secured three points for the home side, despite a stunning volley from Cole Stockton.

Seddon opened the scoring on the 29th minute when he headed home from close range. Stockton hit back with a thumping volley just after the hour mark, before Sykes beat Jokull Andresson to the ball to prod home on the 73rd minute.

Taylor wrapped up the afternoon two minutes from time, as his chipped effort ended up in the bottom-right corner of the Morecambe goal.

Inside the opening minutes of the game Greg Leigh denied Sykes an opportunity on goal as the Jamaican international put in a sensational last-ditch challenge to nick the ball off of the strikers toes.

Up at the other end, Adam Phillips came close to opening the scoring as a ball through from Cole Stockton found the on-loan Burnley man in space but the defence was on hand to user his effort out of play.

A minute before the half-an-hour mark, the hosts took the lead.

A corner from James Henry was headed goal-wards by Elliott Moore, the flicked on at the near post by Matty Taylor and there was Seddon to nod home and score his second goal of the Sky Bet League One season.

On the 41st minute Wes McDonald stung the palms of Simon Eastwood in the U’s goal. The winger chose to cut in from the left and unleashed an effort from 25-yards out, but Eastwood was behind it and parried the danger away.

Moments later, the Shrimps had their first real chance to level the game up. A cross from the right by Ryan Cooney was headed goal-wards by Stockton, but Eastwood was equal to it once again.

On the stroke of half-time the hosts had one more opportunity to go in at the break up by two, an effort by Holland was inches away from finding the bottom-left corner of Andresson goal, but thankfully for the Shrimps it went wide of the mark.

At the start of the second period, Morecambe had a huge chance to get back into the game.

A drilled ball from the right directed towards the back-post reached its intended target in the form of Ryan Delaney, but the centre-back could not sort his feet out and shanked his effort wide of the target.

Moments later the home side were awarded a penalty, a long-ball over the top was misjudged by Jokull Andresson leaving Taylor with the ball at his feet.

Andresson in a desperate effort to regain the ball adjudged to have pulled the striker down by referee Lee Swabey, who in-turn pointed to the spot.

Up-stepped Henry, and thankfully for Stephen Robinson’s side he got too much height on his effort and the ball ended up in the crowd behind Andresson’s goal.

On the 64th minute the Shrimps were level. A stunning cross from the right by Cooney was met with an equally brilliant volley from Stockton who left Eastwood in the U’s goal with absolutely no chance.

Nine minutes later, the home side were back in-front.

A cross from the left by Seddon was knocked down by Taylor who found the on-rushing Sykes who prodded home ahead of Andresson.

We are back at the Mazuma Stadium on Tuesday night, as we host Cambridge United in Sky Bet League One.

Tickets are now on sale for our Sky Bet League One fixture against Oxford United FC.

Tickets are available in the North Stand.
Prices for the fixture are listed below.

Please note that tickets for this fixture will go off sale from the Club Shop at 5pm on Thursday 28 October.

Supporters can purchase tickets at the Kassam Stadium at no extra cost. 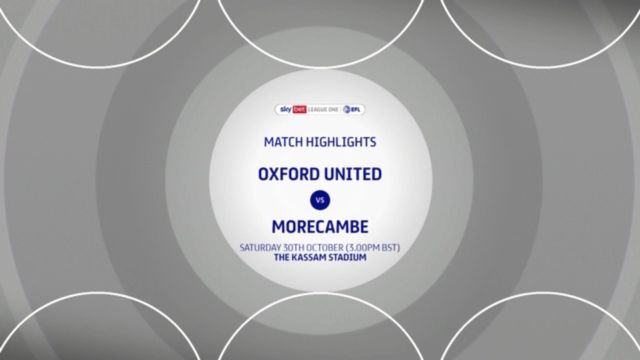 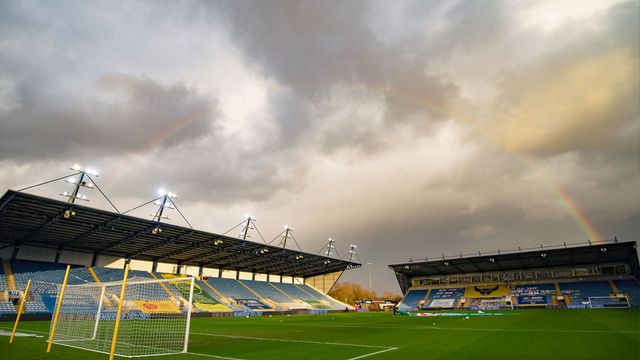