The Shrimps travel to the Keepmoat Stadium to face Doncaster Rovers on Saturday 16 September in Sky Bet League One.

Morecambe go into the clash on the back of a narrow defeat in the Papa John’s Trophy, losing by a goal-to-nil against Everton U21s at home, whereas the hosts fell to defeat last time out against Wigan Athletic.

The two teams have only met on two previous occasions in the English Football League, in the 2016/17 Sky Bet League Two season, where Rovers beat the Shrimps at the Globe Arena by five-goals-to-one, before a 1-1 draw was played out in the return fixture.

Having finished 14th in Sky Bet League One last campaign, Rovers have endured a tricky start to the season, losing five of their opening six league games, picking up their only point in a 0-0 stalemate at home to Portsmouth.

The South Yorkshire outfit kicked off the season with a 2-1 defeat against AFC Wimbledon before beating Walsall on penalties in the Carabao Cup. From there, Richie Wellens’ side picked up losses against Sheffield Wednesday, Accrington Stanley and Stoke City in Round Two of the League Cup, before falling to two defeats against Rotherham United in the league and the Papa John’s Trophy and finally a loss against Wigan Athletic.

Since taking the Keepmoat Stadium hotseat in May 2021, former Salford City boss Wellens has taken charge of nine matches for Rovers, winning one, drawing one and losing seven, picking up four points and averaging out a total of 0.44 points per match.

Rovers’ boss Wellens spoke before the game and admitted his side must ‘go for it’ this weekend as his Doncaster side goes in search of their first three points of the campaign.

“No excuses anymore,” he said.

“The message this week is to go for it.

“Be expressive, get forward, get numbers in the box. Pass forward, run forward, if you’ve got the opportunity then drive forward.

“Training has been really, really good. We’re going full throttle at the weekend.”

Rovers’ skipper Tom Anderson spent 12 years progressing through the academy at Premier League side Burnley between 2000 and 2012 before signing his first professional contract at Turf Moor. After spending loan spells at nine different clubs, the 28-year-old arrived at the Keepmoat Stadium on a permanent deal. Since then, Anderson has made 126 appearances, scoring six goals from the heart of defence. After a successful start to life at Rovers, Anderson was made club captain in January 2021.

Goalkeeper Pontus Dahlberg joined the club in August on a season-long loan from Premier League Watford. The 22-year-old, who has played twice for the Swedish senior team as well as accumulating over 40 appearances for the youth sides, has played over 115 professional games in his career, including once in the Europa League Qualifying stages for IFK Göteborg, and has kept 28 career clean sheets to date.

Experienced midfielder Tommy Rowe is well into his third spell at the Keepmoat Stadium and has accumulated more than 150 appearances for the Dons, netting 32 goals and providing 24 assists. The 32-year-old has played 215 League One games as well as 183 in the Championship and 74 in League Two. Rowe has also appeared in three different League One Play-Off campaigns, winning in 2011 for Peterborough United as well as winning the League Two Play-Offs for Stockport County in 2008.

Despite Doncaster’s difficult start to the campaign, Shrimps manager Stephen Robinson has reiterated the importance of not getting carried away and underestimating Wellens’ side.

“I’ve watched their games,” he said.

“I watched their game against Wigan, they were unfortunate with a goal disallowed, they played well, they’ve changed systems quite a lot.

“I watched their game against Portsmouth where I thought they were very good.

“Sometimes you don’t get things go your own way, I think maybe the league table’s maybe not telling their true position at the moment, so we certainly won’t go and underestimate them.”

Taking charge of the game is Luton-based Will Finnie, with Paul Stonier and Declan Ford running the lines and Mark Dwyer stepping in as fourth official.

Saturday’s referee has taken charge of six games this season, three in League One, two in the Carabao Cup and one in the Papa John’s Trophy, distributing 10 yellow cards and one red card.

Finnie, who officiated his first EFL game in August 2019, refereed the Shrimps in our 1-0 FA Cup victory over Maldon & Tiptree.

Joining host Dave Salmon is the club’s Head of Media and Communications Ryan Daly, audio passes are available from as little as £2.50 per match, £4.49 for a monthly pass or £45 for a season pass.

The Shrimps fall to narrow defeat against Doncaster Rovers at the Keepmoat Stadium.

The first chance of the game fell to the way of the Shrimps on two minutes, after an Arthur Gnahoua cross destined for the box was deflected wide, the resulting corner was sent deep but just about evaded everyone in its path.

Doncaster responded well and carved out a chance of their own three minutes later, but an onrushing Jokull Andresson made himself big and blocked the shot of the advancing Dons’ attacker with his chest, clearing the danger.

Efforts of note were few and far between in the opening stages as both sides looked to gain a foothold in the match.

Wes McDonald came closest for the Shrimps in the first half on 31 minutes after receiving a pinpoint pass from Gnahoua, but Pontus Dahlberg in the Doncaster goal was equal to the effort.

Further efforts from the likes of Shane McLoughlin and Cole Stockton came to nothing as Stephen Robinson’s side looked to increase the pressure on the hosts.

Morecambe could well, and possibly should, have been awarded a penalty on 42 minutes when Greg Leigh picked up the ball in the box and looked to round the goalkeeper, who looked to bring down the left back, but the referee disagreed and waved away protests from the men in black.

The hosts came out of the blocks the quicker out of the two in the opening stages of the second half and created a few chances, most notably forcing defender Ryan Cooney to clear a shot off the line on 50 minutes.

Substitute Adam Phillips came close for the Shrimps on 62 minutes after the ball fell kindly to him, but the Burnley-loanee could only curl his effort around the wrong side of the far post.

It was Richie Wellens’ side who came closest to breaking the deadlock on 69 minutes when a fierce effort from the edge of the box was sent goalward, but Andresson did well to smother the ball and extinguish the danger.

12 minutes later and Rovers were ahead, courtesy of a Tommy Rowe header from a corner which looped beyond the reach of Andresson and nestled into the back of the net.

A late chance for Morecambe came in the 91st minute when the ball fell to Scott Wootton, but the defender’s volley sailed over the bar as the hosts held on for their first three points of the season.

The Shrimps travel to Crewe Alexandra on Tuesday night for our rescheduled Sky Bet League One fixture that was postponed as a result of international call-ups.

Tickets are now on sale for our Sky Bet League One game against Doncaster Rovers.

Tickets are now available to purchase for the away trip to Doncaster on Saturday 18th Sept. Tickets are available from the Morecambe Club Shop and online until 4.30pm on Friday 17 September. Shrimps fans will be situated in the Solutions 4 Cleaning North Stand.

Tickets purchased online can be collected from the Morecambe Club Shop until 4.30pm on Friday 17 September, all collections will then be from the Club Doncaster Academy reception from 2 hours prior to kick off onwards. This is located next to the away turnstiles. Tickets can also be purchased on the day from the same location.

Prices are as follows:

Should a full-time carer be needed then a carer is free of charge if on the higher/enhanced rate of disability. 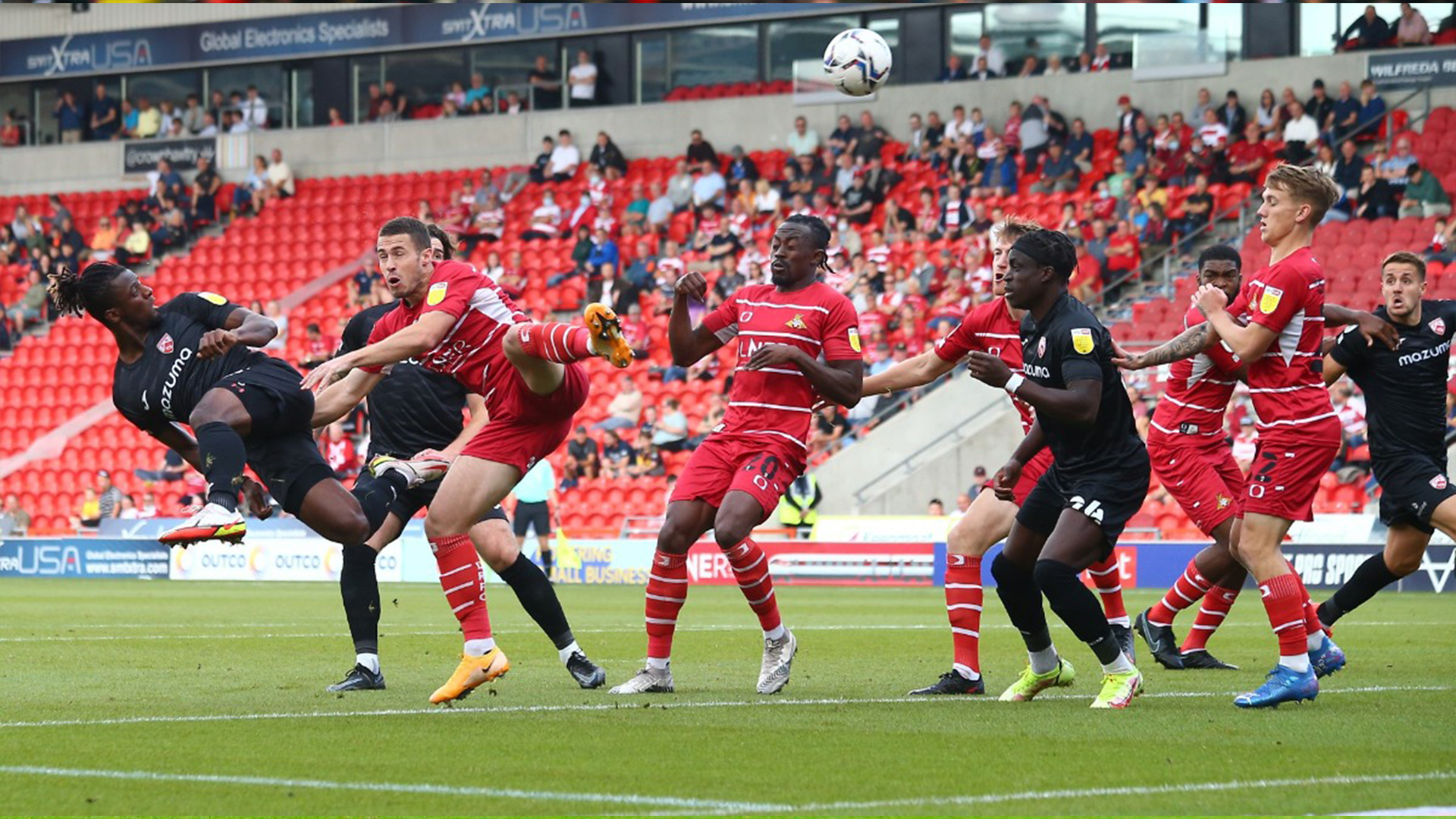