The Shrimps host Lancashire rivals Accrington Stanley in Sky Bet League One on Saturday 25 September in what will be the first competitive meetings between the two sides since March 2018.

Morecambe secured all three points in their last outing at Crewe Alexandra, picking up their first league away in of the campaign in the process. Goals from Adam Phillips and a Arthur Gnahoua brace was enough to separate the teams, despite a goal for the Railwaymen four minutes into the second half.

The sides have met 22 times in the league since 2007, with another game coming in the Johnstones Paint Trophy, and the Shrimps have won only three of those meetings, drawing six and losing 14.

John Coleman’s men endured an up and down campaign last season and were pushing for Play-Off spots until the latter months where an injury-riddled squad paid the unfortunate price, and the reds ultimately finished in 11th place in Sky Bet League One.

The East Lancashire side currently sit 11th in the table after a start that saw defeat to Wycombe Wanderers on the opening day before three wins on the bounce against Cambridge United, Doncaster Rovers and Crewe Alexandra respectively. Since then, Stanley have lost at MK Dons, drawn to Barrow, beaten Shrewsbury Town and their last two outings have seen defeat at the hands of Sunderland and Wigan Athletic respectively.

Coleman represented Morecambe as a player, and the 58-year-old is well into his second stint as manager at the Wham Stadium. Initially taking charge of the side between 1999 and 2012, the Kirkby-born man left to take the hot seat at Rochdale before spells at Southport and Sligo Rovers. Since re-joining the club in September 2014, he has managed 367 matches, winning 157, drawing 83 and losing 127. In those games, his sides have scored 558 goals and conceded 532, picking up 554 points and averaging out at 1.51 points per match.

Ahead of Saturday’s fixture, Coleman says that he hopes his side will maintain their recent form at the Mazuma Stadium.

“We’ve genuinely done well there, so hopefully we can keep that up,” he said.

“I commentated on both their Semi-Final’s and I thought they were terrific, they showed a terrific team spirit, played some great football, and have kept quite a few players who’ve earned the right to play in League One and they’re doing well this year.

“I know Stephen [Robinson] from my coaching badge days in Ireland, he’s a good manager, a good footballing person, to take over a team and have the upheaval that they did after getting promoted, he’s done really well.

“He started the season with a good performance at Ipswich and he’s carried that on and got good results, we had someone at the [Crewe] game, John Doolan went to the game, and he was impressed with what he saw.

“We know we’ve got our work cut out, but if we can get back to playing the way we can play, which we know we’re capable of, we’re a match for anybody.”

Stanley’s captain Seamus Conneely joined the club in January 2015 and, after six months, proved himself as a real leader within the squad and was ultimately handed the captain’s armband. The former Republic of Ireland youth international has gone on to represent Stanley on 260 occasions, scoring 12 goals and providing 12 assists. The 33-year-old also helped Stanley to the 2017/18 Sky Bet League Two title, lifting the trophy as skipper.

Towering central defender Ross Sykes progressed through the ranks at the Wham Stadium after being released by Burnley as a youngster. After successful spells with Accrington U18s and a loan deal at Southport, the 6ft 5 man established himself in the first team setup in the 2018/19 season and has gone on to make 97 appearances for the club, scoring seven goals and providing 3 assists.

Striker Colby Bishop is into his third season as a Stanley player having joined from Leamington in July 2019. The 24-year-old has gone on to score 27 goals in 91 appearances for the reds as well as providing eight assists. The Nottingham-born man has previously played for the likes of Notts County, Gloucester, Worcester City and Boston United.

Manager Stephen Robinson has enjoyed his fair share of derby days in his footballing career, and he say whilst the players are aware of how much this fixture means, they will be focussed on the task at hand.

He said: “We’ve made it clear [to the players] how big a game it is, how important it is to the fans.

“Ultimately, in their minds, they have to remain cool and calm and play the game, not play the occasion and make sure we stay composed.

“To them, it should just be three points because they have to be focussed on what’s at hand, and that’s trying to get them three points.

Tyne and Wear based referee Marc Edwards will take charge of the Lancashire derby, with Kevin Mulraine and Paul Graham running the lines and Mark Cunliffe as fourth official.

Edwards has refereed five games so far this campaign, in Sky Bet League’s One and Two, the Carabao Cup and the Papa John’s Trophy, distributing a total of 16 yellow cards.

The official refereed Morecambe on two occasions last season, including our 1-1 draw home to Mansfield in October 2020 as well as our 1-0 win over Cheltenham Town at the Mazuma Stadium in March 2021.

Tickets are now on sale for our Sky Bet League One game against Accrington Stanley. 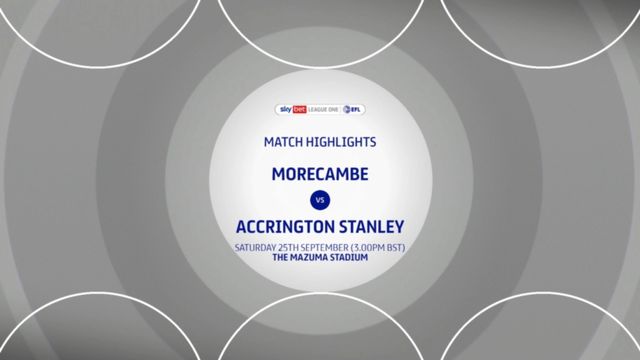 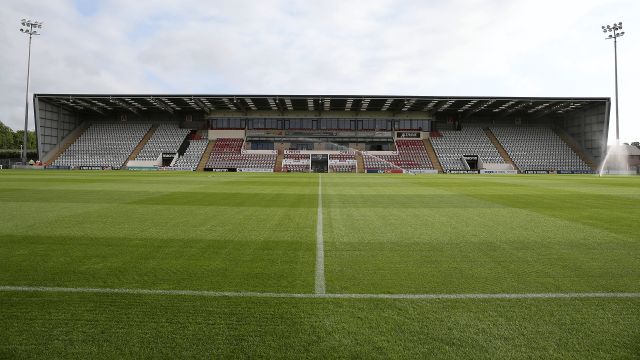