The Shrimps host Everton U21s at the Mazuma Stadium in our opening Papa John’s Trophy fixture of the season.

Morecambe kick off their Papa John’s Trophy campaign on Tuesday 14 September, taking on Everton U21s at home in Group A before facing Hartlepool United away and Carlisle United at home in October and November respectively.

Stephen Robinson’s side look to bounce back on Tuesday night after a narrow defeat at the weekend at home to AFC Wimbledon before taking on Doncaster Rovers away in Sky Bet League One action later in the week.

Since taking over as Everton U21 manager, David Unsworth has taken charge of 163 games, winning a total of 72, drawing 34 and losing 57. As a result, the 47-year-old has accumulated a total of 250 points, averaging out at 1.53 points per match.

In their opening four games of the season, Unsworth’s side drew their opening game 2-2 away at Blackburn Rovers before losing two on the bounce against Liverpool and Crystal Palace respectively. His first win of the campaign came on Friday 10 September at home to Derby County by a goal to nil.

20-year-old forward Ellis Simms enjoyed youth spells at Blackburn Rovers and Manchester City before joining the Goodison Park academy where he graduated as a professional in 2019. The Oldham-born man spent the last six months of the 2020/21 season on-loan at Blackpool, scoring eight goals and providing two assists in 21 appearances, ultimately playing an integral role in the club’s promotion to the Sky Bet Championship.

Standing at 6ft 5 inches tall, centre-back Jarrad Branthwaite already boasts a wealth of footballing experience, despite being only 19-years of age. The young defender made his international debut for England U20s at the start of the month in a 6-1 victory over Romania. As well as spending the second half of last season on-loan at Blackburn Rovers, Branthwaite has also made 14 appearances for Carlisle United, netting once, and has made six first-team appearances for the Toffees.

Midfielder Tyler Onyango joined the Goodison Park club at the age of eight and signed his first professional contract with the Toffees in July 2020, making his professional debut in a FA Cup fourth-round victory against Sheffield Wednesday in January of this year. As a result, the youngster was included in 10 further senior matchday squads.

As a player, Stephen Robinson reached the Final of this competition with AFC Bournemouth, narrowly losing out against Grimsby Town, and the Shrimps boss is keen to replicate his achievements as Morecambe manager.

Tyne and Wear-based Andy Haines will take charge of the fixture, with Anthony Moore and Conor Brown running the lines and Chris Isherwood taking up the position of fourth official.

Haines has taken charge of six games this season, in the Carabao Cup, Sky Bet League Two and the Papa John’s Trophy, and has issued a total of 13 yellow cards.

The official took charge of the Shrimps just once last campaign, in our 3-1 home defeat against Newport County, sending off former skipper Sam Lavelle in the process.

A second half goal from substitute Sean McAllister was enough to hand Everton U21s three points in the opening game of our Northern Group A fixture in the Papa John’s Trophy.

The first opportunity of the game came in the seventh minute, as Wes McDonald showed a clean pair of heels to Eli Campbell before shooting over the crossbar.

11 minutes later it was the home side again with the next effort on goal, midfielder Callum Jones picked the ball up from 25-yards out and let fly, hoping to open his account for the season, but some safe hands from Zan Luk Leban made sure the scores stayed level.

The Toffees came close to finding the back of the net through Tom Cannon, the striker’s effort was whiskers away from finding its way into the bottom-right corner of Kyle Letheren’s goal.

As the first half neared to a close, it was McPake again who had Luk Leban in the Everton goal scrambling, but the on-loan Rangers man could not find away past the goalkeeper who denied him once again.

A frantic start to the second half saw the Shrimps have a flurry of action, firstly Scott Wootton’s goal bound effort was deflected behind for a corner, then Jacob Mensah had a header which came close to opening the scoring.

On the 64th minute the first goal of the night was scored. A rasping effort from substitute McAllister hit the inside of Letheren’s post before rippling the back of the net.

Ryan Cooney came off the bench replacing debutant Ryan McLaughlin, but the full-back could not change the scoreline with his effort.

We return to league action on Saturday as we face Doncaster Rovers at the Keepmoat Stadium.

Tickets are now on sale for our Papa John's Trophy game against Everton U21’s.

Tickets are available in the Bartercard Stand and Wright & Lord Stand.

Season ticket holders are reminded that they have to purchase tickets for Papa John's Trophy games as they are not included in their season tickets.

For those who purchase main stand tickets, the suite is available for use - subject to capacity limits. 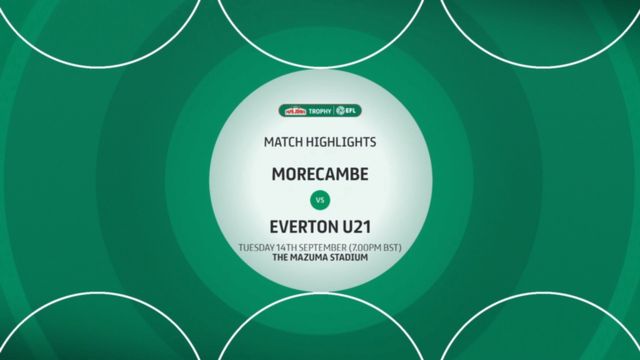 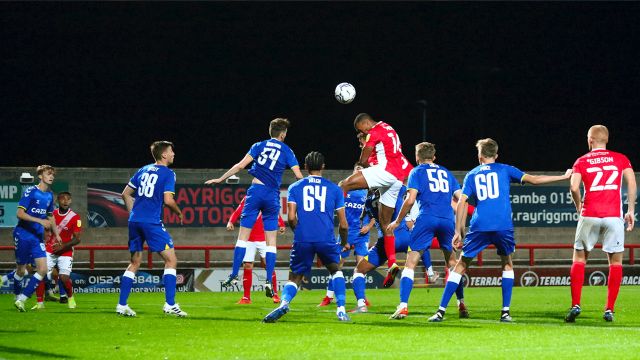