The Shrimps host Lancashire rivals Fleetwood Town at the Mazuma Stadium on Saturday 13 August in League One.

In midweek Morecambe advanced past Championship side Stoke City in Round One of the Carabao Cup. In the second-half the Shrimps were reduced to 10-men after Jensen Weir received two yellow cards in quick succession. With no goals in normal time, the tie was decided on penalties which saw the Derek Adams' men prevail as 5-3 winners.

Since 2012 Morecambe have won three out of the nine meetings between the two sides. Fleetwood Town have won four and the other two ended in a draw.

Last seasn, the Shrimps picked up four points against the Cod Army in League One. In November's away fixture, Cole Stockton’s wonder-strike in stoppage time secured all three points. Meanwhile the reverse fixture at the Mazuma the following month ended in a goalless draw.

After losing 2-1 against League One newcomers Port Vale on the opening day of the season, Scott Brown’s men picked up maximum points on home soil against Plymouth Argyle last weekend. Daniel Batty’s strike cancelled out Ryan Hardie’s spot-kick, before Joe Garner secured the win two minutes from time. In midweek, the Cod Army knocked Championship-side Wigan Athletic out of the Carabao Cup with a 1-0 victory.

The Celtic legend was appointed Fleetwood boss in May 2022, succeeding Stephen Crainey who has returned to his role with the club’s Under-23s. Brown spent last season as player/coach at Aberdeen, before taking up his first role in management at Highbury. The 36-year-old won the Scottish Premiership 10 times with Celtic, along with the Scottish Cup and Scottish League Cup six times respectively.

21-year-old Paddy Lane won the EFL's Young Player of the Year award and Fleetwood Town Supporters’ Player of the Year Award last season. He joined the Cod Army in the summer of 2021 from Hyde United. The former Blackburn Rovers youth product made his senior international debut for Northern Ireland in March 2022.

Summer signing Brendan Sarpong Wiredu arrived at Highbury from Colchester United. The 22-year-old, who came through the youth team at Charlton Athletic, can play as a midfielder, full-back or wing-back.

Gerrard Garner has progressed through the youth setup at Fleetwood Town. The forward spent time out on loan at a number of clubs including FC United of Manchester and Gateshead before becoming a first-team regular. Last season Garner contributed with seven goals.

“They’re all tough tasks in this division and I think that Fleetwood is no different on Saturday,” he said.

“They play in a way that can be expansive at times, they push the full-backs forward so we understand that and we have to deal with that threat.

“We always know from our players that we’ve got a threat going forward as well and can punish teams.”

Sebastian Stockbridge will take charge of Saturday’s all-Lancashire affair. He will be assisted by linesmen Conor Brown and Graeme Five along with fourth official Matt Corlett.

Last season the Tyne-based official took charge of 37 games and handed out 116 yellow cards and five red cards. He last took charge of the Shrimps in December when Morecambe lost 2-1 at home to Crewe Alexandra.

Lead commentator Dave Salmon will be joined by the Club's Head of Media & Communications, Ryan Daly.

Derek Adams side were held to a draw after Danny Andrew scored with seven minutes to go, after Arthur Gnahoua initially gave the home side the lead on 32 minutes.

The Shrimps started the better of the two sides and came close to opening the scoring within two minutes. Jake Taylor managed to dance his way through the Cod Army back-line before letting fly from just outside of the area, however, his effort was lacking direction.

Ash Hunter was the next to try his luck, again finding some space on the edge of the box before firing his shot into the away fans behind Jay Lynch’s goal.

Scott Brown’s side came back into the game after that, on the 19th minute, a corner from Andrew was nodded goalwards by Toto Nsiala, the ball looked to be heading into the bottom-right corner of Connor Ripley’s goal but there was Gnahoua to clear it off the line.

The Shrimps had a case for a penalty on the 25th minute, Taylor fired the ball into a decent area which would have reached Jon Obika should Brendan Sarpong-Wiredu’s arm not have got in the way.

Derek Adams would have been happier with the next wave of attack from the home side, which resulted in the opening goal of the afternoon.

Hunter played in Gnahoua and as they say, the rest is history, a couple of touches out of his feet, enough to set him up before letting go a rocket off an effort which found its way into the top-corner of Lynch’s goal.

It was Hunter who again who caused the away side trouble, he picked off a poor back-pass from one of the Fleetwood defenders, he just had Lynch to beat but his shot could only find the foot of a post.

The visitors came out of the trap quickly at the start of the second-half, they should have been on level terms after 52 minutes when Paddy Lane received the ball in the box, but the Fleetwood Town man blazed his effort over the crossbar.

Dylan Connolly was introduced with just over 15 minutes to go, and it was the Irishman who should have scored to to make it two-nil, but Lynch again proved to be a brick wall in the Cod Army goal denying him in a one-on-one situation.

The Shrimps were punished for not taking their chances with seven minutes to go, a ball over to the left-hand side found Andrew, the left-back cut in on his right-footed and curled a stunning effort into the top right corner of Ripley’s goal.

Scott Brown’s men were reduced to 10-men late on as Lane was sent off in second-half stoppage time.

Tickets for our Sky Bet League One home fixture against Fleetwood Town on Saturday 13 August, 3pm KO, are now on sale. 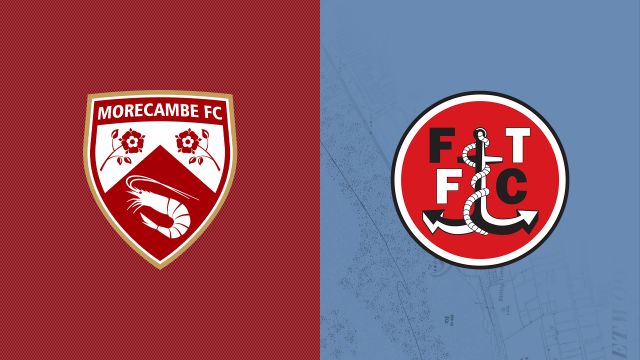 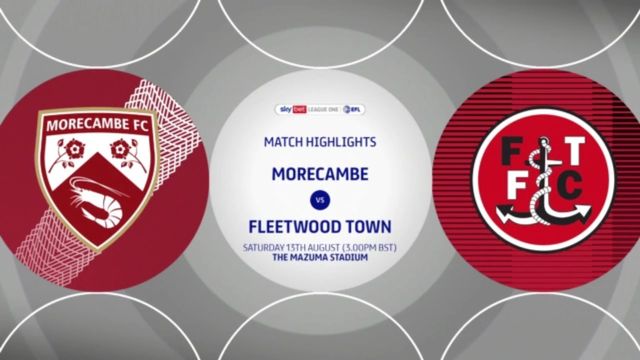 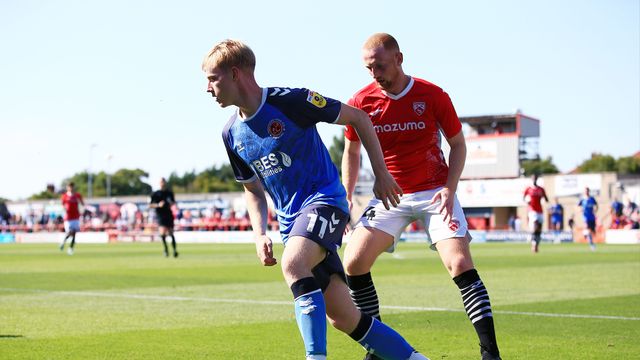