The Shrimps return to Sky Bet League One action on Saturday at the Mazuma Stadium with MK Dons the visitors.

Morecambe head into the clash filled with confidence after a midweek Carabao Cup Round Two victory over Championship side Rotherham United. A powerful 72nd minute strike courtesy of Arthur Gnahoua proved the difference between the two sides on the night.
The Dons also enjoyed cup success against higher league opposition, beating Watford by two goals to nil at Vicarage Road.
For their efforts, both teams were drawn against each other in the Third Round, but it'll be this weekend's league clash that'll be at the forefront of everyone's minds.
The opposition
Liam Manning's men have enjoyed a topsy turvy start to the 2022/23 season. After three defeats on the bounce in League One, against Cambridge United, Sheffield Wednesday and Ipswich Town respectively, a 2-1 home victory over newly promoted side Port Vale gave the Dons their first three points of the campaign. Their last game in the league, at home to Accrington Stanley, ended in a 1-1 draw.
MK will be hoping to replicate last season's success, and go one step further, after missing out on a place at Wembley in the Play-Off Final following defeat over two legs against Wycombe Wanderers. They finished third on 89 points, and enjoyed 26 victories out of 46 played, 11 draws and just nine defeats.
Key players
Highly thought of midfielder Louie Barry arrived in Milton Keynes in July on a season-long loan from Aston Villa. At just 19-years-old, the winger not only boasts experience in League's One and Two, but also scored a famous FA Cup Third Round equaliser against Liverpool for Villa. After a long spell at the West Bromwich Albion academy, Barry signed for Barcelona, where he spent six months with the U19 side. In 79 professional appearances, the versatile winger has scored 34 goals and registered 11 assists.
After previously spending the 2014/15 season on loan with the Dons, Will Grigg made a permanent return to Buckinghamshire in the summer. A proven goalscorer, the 31-year-old has netted 142 times in 459 professional domestic appearances, and has spent the majority of his career at this level, with Championship experience to boot. A Northern Irish international, Grigg has 13 caps to his name and became a cult hero at EURO 2016 with the well known 'Will Grigg's on fire' chant.
Experienced midfielder Bradley Johnson leads the scoring tally for MK Dons so far this season with two goals, both of which came in the club's 2-1 win over Port Vale. Whilst predominantly a central midfielder, Johnson has the versatility to play in a number of roles, including a deeper defensive midfield position, centre back and even left midfield. The 35-year-old is closing in on 600 professional appearances, 101 of which came in the Premier League for Norwich City.
Liam Manning's pre-match thoughts
Ahead of their visit to Lancashire, Dons' boss Liam Manning has said he expects a tough game against Morecambe.
"They'll be well coached, well organised, I think that's the big thing now that you do see," he told MKDons.com.
"They'll be compact, they won't give up space they'll be aggressive, they'll have moments of quality I'm sure as well, and they'll carry a threat.
"It was a good performance [last season at the Mazuma], but going up there, that's gone, that's in the past, obviously they've had a change in manager since with Derek going there, we're a new team as well so it's a completely different game."
Meet the officials
Leigh Doughty will take charge of proceedings on Satuday, with Robert Merchant and James Wilson running the lines as Daniel Woodward completes the line-up as Fourth Official.
The Freckleton-based official has taken charge of three games so far this season, one in League Two and two in the Championship, and has handed out 15 yellow cards and one red card.
Doughty last took charge of a Morecambe game in September 2019 when Oldham Athletic beat the Shrimps by three goals to one at Boundary Park.
iFollow
After teaming up with Beyond Radio for the 2022/23 season, supporters will be able to listen to exclusive, full and uninterrupted radio commentary of every single game, home and away, which will be broadcast simultaneously on 103.5FM, 107.5FM and DAB+ digital radio across North Lancashire and South Cumbria as well as on the iFollow Shrimps platform.
Lead commentator Matt Horton will be joined by the Club's Media and Content Coordinator, Matt Smith.
Audio passes are available from as little as £2.50 per match, £4.49 for a monthly pass or £45 for a season pass.
As well as full match commentary, the ‘Shrimps Verdict’ podcast will be available post-match, featuring online, on demand content, including audio match highlights, post-match interviews and reaction, and much more!

Morecambe lose 4-0 to MK Dons after a Will Grigg's double alongside second-half goals from Conor Grant and Matthew Dennis see the visitors pick up all three points.

The away side took the lead with the first real sight of goal, a well worked interchange of passing between Bradley Johnson and Grant saw the latter break free down the left, he drilled a ball into the six-yard box where Grigg was waiting to prod home from close range.

Three minutes before the half-an-hour mark and Liam Manning’s side came close to doubling their lead. A ball into the box from the right-hand side found the head of advancing full-back Daniel Harvie who put his effort onto the roof of Connor Ripley’s goal.

MK Dons and Grigg had their second of the game moments later, another attack down the Shrimps’ right saw Harvie cross this time, Grigg on the move again guided his effort into the bottom-right corner of Ripley’s goal, leaving the ‘keeper with no chance.

On the hour mark the home side should have had a goal back, Taylor played a delightful through ball in the direction of Jensen Weir, the on-loan Brighton man skipped past his defender before firing his effort of a post.

Their frustrations turned to anger just after the hour mark as the away side added a third. A mazy run by Henry Lawrence saw him slip through Grant who had the easy job of applying the finish.

MK Dons scored their fourth of the game on the 67th minute, Johnson this time with the ball through set substitute Dennis baring down on goal, he tucked his effort into the bottom-left corner of Ripley’s goal.

Tickets for our Sky Bet League One home fixture against MK Dons on Saturday 27 August, 3pm KO, are now on sale. 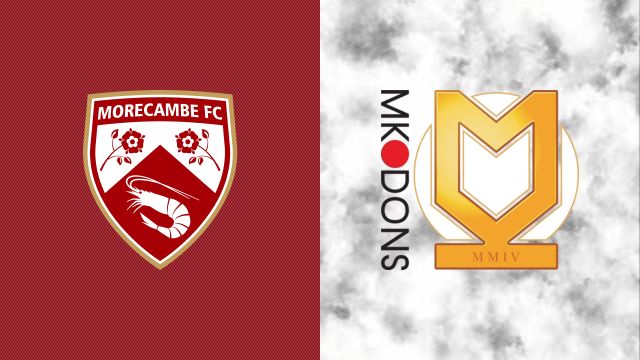 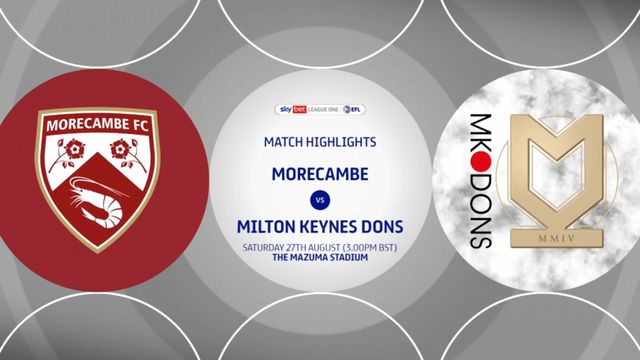 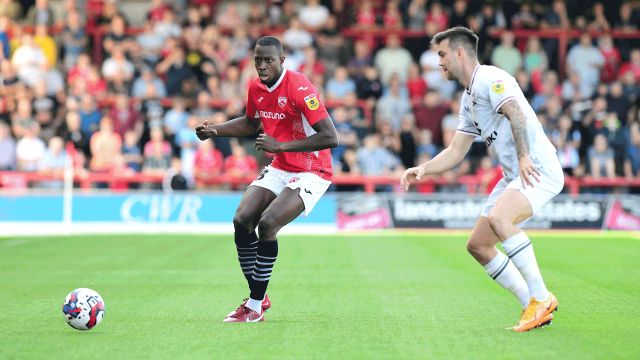