The Shrimps travel to The Weston Homes Stadium to face Peterborough United in what is the Club's first away trip of the 2022/23 Sky Bet League One campaign.

Derek Adams' men gained a point in last Saturday's season opener, in what was a tightly contested affair with Shrewsbury Town at the Mazuma. Both sides were able to carve out a number of strong chances without finding the back of the net. Dylan Connolly coming closest for Morecambe, but his 26th minute one-on-one strike was saved at close range by Marko Marosi in the visitors goal.

The Posh enjoyed an opening day victory over Cheltenham Town, with goals from Jack Marriott and a Jonson Clarke-Harris brace proving enough to complete a comeback from two down against Wade Elliott's Robins.

After picking up maximum points on the opening day, United find themselves second in League One, level on points with leaders Wycombe Wanderers, who have a slightly better goal difference than the Posh.

Grant McCann's men spent the 2021/22 campaign in the Championship, and after winning nine games, drawing 10 and losing 27, they were pipped to survival by Reading who finished only four points above the Posh.

Formally an Assistant Manager for the Cambridgeshire side, McCann is into his fourth stint at Peterborough having previously spent time as a Caretaker Manager (September 2015) and Manager (April 2016-February 2018) before arriving back at The Weston Homes Stadium in February this year.

Stiker Jonson Clarke-Harris netted 12 goals in 44 appearances in all competitions last season and also provided three assists. The 28-year-old first spent a year with United in 2012, but was sent out on loan at Southend United and Bury respectively, before departing permanently for Oldham Athletic. Following a season with the Latics, Clarke-Harris enjoyed spells with Rotherham United, MK Dons, Doncaster Rovers,  Coventry City and Bristol Rovers before landing back with the Posh in the summer of 2020. The Jamaican-international has scored 108 goals in 360 career appearances to-date, and is proven to punish teams when given half a chance.

Midfielder Joe Ward provided two assists for United during a 45 minute appearance on the opening day, proving himself a valuable assett for this Peterborough team. As well as boasting 164 EFL appearances, 38 of which came in last season's Championship campaign, the 26-year-old featured in Lincoln City's famous 1-0 FA Cup Fifth Round victory over then-Premier League outfit Burnley. Ward has enjoyed his FA Cup so far, having starred against the likes of Premier League giants Arsenal and Manchester City.

Ben Thompson arrived in the summer following a six-month spell with Gillingham. Prior to his time in Kent, the 26-year-old spent eight years with Millwall, racking up an impressive 173 appearances in all competitions for the Lions, scoring 12 goals and providing four assists. The versatile Thompson has the ability of playing as a number 8 or a number 10, can be aggressive when required and isn't afraid to drive at opposition players with the ball at his feet.

Ahead of Morecambe's trip to the Weston Homes Stadium, manager Derek Adams was full of praise for Grant McCann's side.

"They're one of the clubs in this league if you're an up-and-coming team, you have to look to," he said.

"They've got some talented players in the side, they were 2-0 down last week, they got it back and won 3-2 so we understand the problems they can cause us."

Dean Whitestone will take charge of Saturday's fixture, with Mark Dwyer and Rob Smith running the lines, and Ruebyn Ricardo taking the role of Fourth Official.

On the opening day, the Northamptonshire-based official, who has officiated over 400 games across all four divisions in the EFL, refereed Hull City's 2-1 home win over Bristol City.

The last time Whitestone took charge of the Shrimps was in November 2018, where Morecambe played out a 1-1 draw at home against Notts Country.

iFollow
After teaming up with Beyond Radio for the 2022/23 season, supporters will be able to listen to exclusive, full and uninterrupted radio commentary of every single game, home and away, which will be broadcast simultaneously on 103.5FM, 107.5FM and DAB+ digital radio across North Lancashire and South Cumbria as well as on the iFollow Shrimps platform.
Audio passes are available from as little as £2.50 per match, £4.49 for a monthly pass or £45 for a season pass.
As well as full match commentary, the ‘Shrimps Verdict’ podcast will be available post-match, featuring online, on demand content, including audio match highlights, post-match interviews and reaction, and much more!

The Shrimps suffered their first defeat of the 2022/23 season after losing 3-0 to promotion favourites Peterborough United at the Weston Homes Stadium.

Goals from Joe Ward, Ben Thompson and Hector Kyprianou sank the Shrimps in an afternoon to forget for Derek Adams’ side.

Both sides started lively, but it was the away side who had the first sight of an opening. A delicious through ball from Cole Stockton tried to find Jensen Weir on the run but Posh goalkeeper Lucas Bergstrom was there to mop up the danger.

The home side turned on the style from there. Jack Marriott was set away down the Shrimps’ left-hand side, the forward managed to squeeze a cross which evaded everyone bar Ben Thompson at the far-post, who forced Connor Ripley into a big one-on-one save.

Peterborough took the lead on the ninth minute through Ward, he picked the ball up 25-yards out and unleashed a right-footed effort found the bottom-right corner of the goal.

It was Stockton again who had a great opportunity to alter the scoreline, he was played through by Ash Hunter but the Shrimps number nine could only find the body of Bergstrom who was there to make an excellent one-on-one save.

Grant McCann’s side had a flurry of chances just shy of the half-an-hour mark. The first one from Thompson, who tried his luck from outside the box forcing Ripley into a save down to his right.

Before Marriott broke free in the box, again, forcing Ripley into a smart save from close range.

Two minutes before half-time, the hosts doubled their lead.

A free-kick on the edge of the box by Jonson Clarke-Harris was too hot to handle for Ripley, the ball fell to B Thompson who managed to squeeze his effort into the bottom-right corner via a deflection off of Ryan Delaney.

Ten minutes after the restart Posh were awarded a penalty after Ripley brought down Clarke-Harris, however the linesman on the near side cut their elation short, as he flagged for an offside in the build-up.

On the 64th minute, Ripley was there again to make a fantastic point-blank save, a cross from the left by J Taylor was met on the head by Clarke-Harris, who was denied by by the Shrimps goalkeeper.

Moments later Hunter came close again. The ball dropped to the number 10 inside the six-yard box but Bergstrom again made himself big and managed smuggle the ball away from danger.

McCann’s side added their third on the 72nd minute, as a through ball from Marriott found Kyprianou on the run, despite slipping in the box, he managed to guide his effort into the bottom-left corner of the Shrimps goal.

It was the two players from the bench who created the next opportunity for Adams’ men, a clipped ball into the middle by Shane McLoughlin found Jon Obika in the area, but the forward man got his volleyed effort all wrong.

Morecambe FC is pleased to announce ticket and coach travel details for our first away Sky Bet League One game against Peterborough United at The Weston Homes Stadium on Saturday 6 August 2022, 3pm KO.

Disabled/Ambulant Supporters
We have 8 wheelchair bays and carer’s tickets available for this fixture. Wheelchair users and ambulant supporters will be expected to pay the relevant admission price and will receive a complimentary carer with their purchase. These tickets are not available online, they must be purchased instore or over the phone.

Match Day Sales
We encourage supporters to pay in advance of this fixture to avoid queuing on the day. Though, tickets will be available to purchase on the day from the Peterborough United Ticket Office.

Duplicate Ticket Requests
Anyone who doesn’t receive their tickets in time for the fixture, through the post, must contact tickets@morecambefc.com or call the Club Shop on 01524411797 (ext 3) in advance of Friday 5 August, 5pm. We must provide Peterborough United with a final duplicate requests list on the day before the fixture to ensure any duplicate requests are available to collect on the day.

Cashless Stadium
Supporters must be aware that The Weston Homes Stadium is a cashless facility. There will be no cash turnstiles and cash will not be accepted at the Ticket Office, Food Kiosks or the Club Shop.

**All children under the age of 18 must be accompanied by a responsible adult (over 18).

Match Day Parking (Minibuses & Coaches)
Peterborough United suggest the Pleasure Fair Meadow car park as a place to park any minibuses and coaches. This is a pay and display car park. 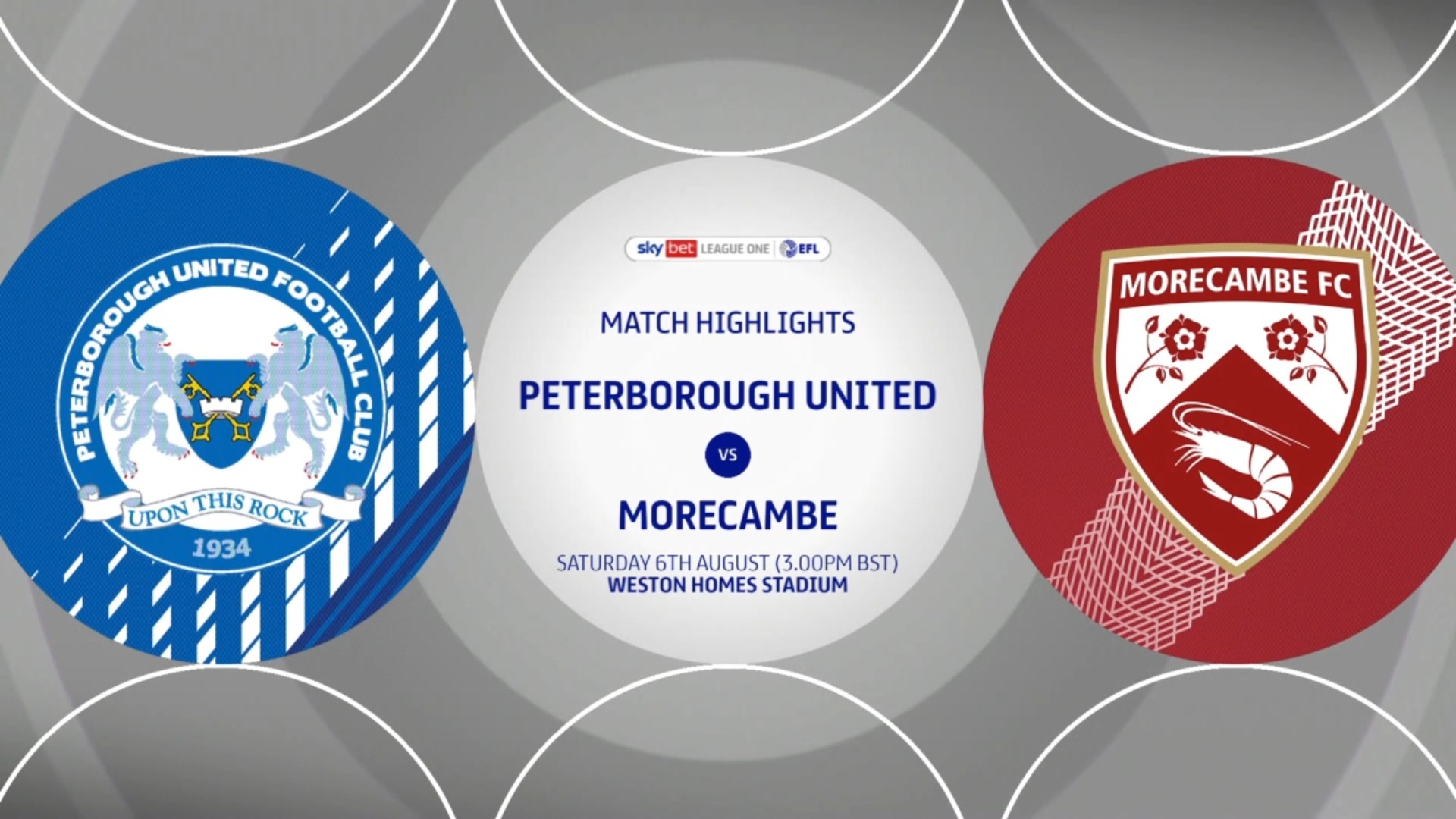 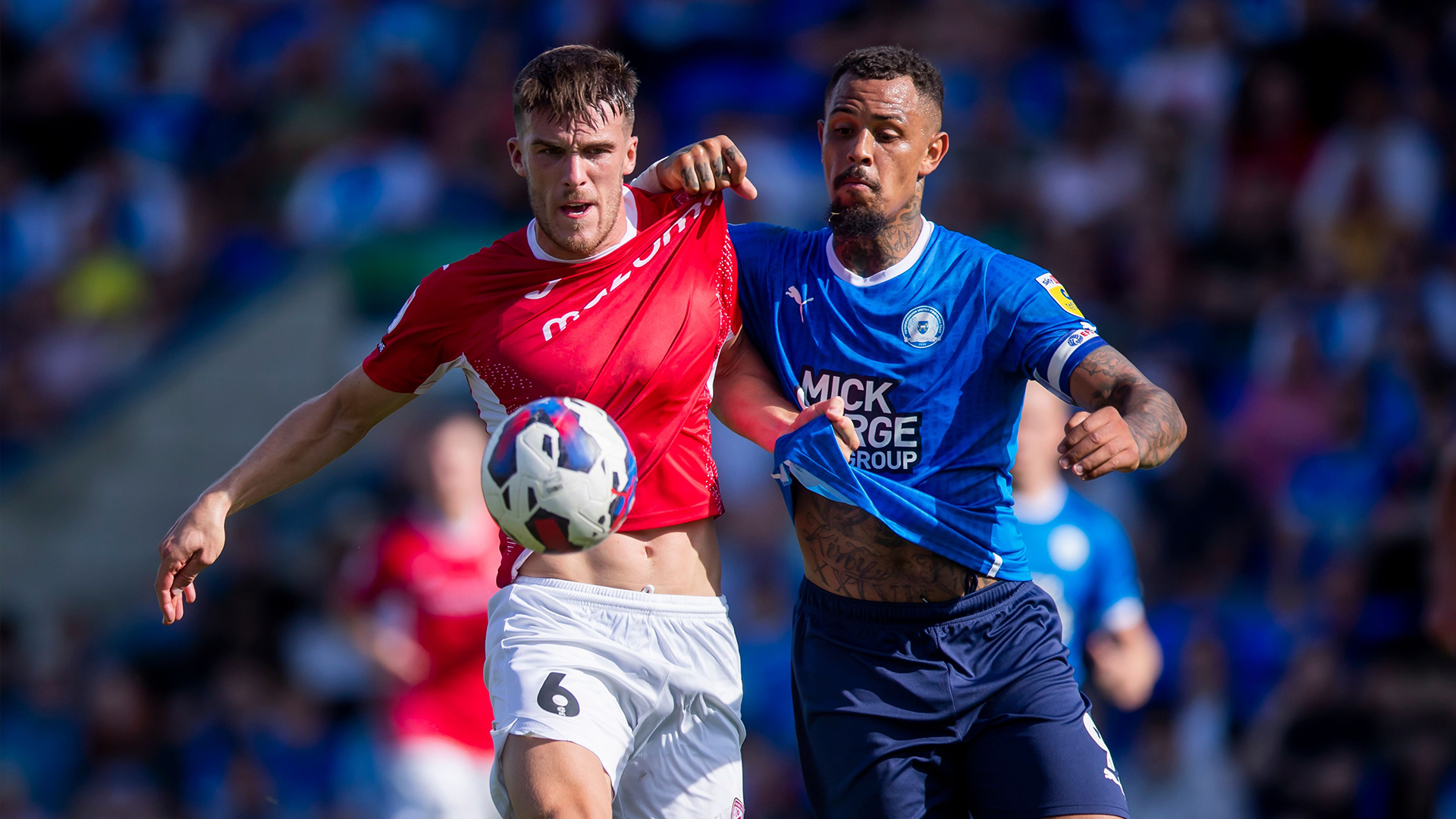