Hartlepool United are the visitors to the Mazuma Stadium as the Shrimps continue their Papa John's Trophy campaign on Tuesday night.

Derek Adams' side drew 3-3 in their Northern Group A opener against Everton U21s back in August, before picking up a bonus point after defeating The Toffees on penalties.

The Pools picked up maximum points against Harrogate Town in their first fixture of the competition and sit just above Morecambe in first place.

The two teams met at this stage of the EFL Trophy in the 2021/22 campaign at the Suit Direct Stadium. Matthew Daly struck first before a Shane McLoughlin chip and a Callum Jones penalty fired the Shrimps into the lead, only for Daly to equalise seven minutes from time. The North-East side converted four penalties from four, winning the bonus point in the process.

United have struggled in their opening 11 games in all competitions, having won only once in the previously mentioned 2-0 victory over Harrogate Town in the Papa John's Trophy.

As well as their 4-0 Carabao Cup defeat against Blackburn Rovers, Hartlepool have played nine in Sky Bet League Two, drawing four and losing five. As a result, they find themselves second bottom in the table, two points above rock bottom Rochdale.

The club announced the sackings of manager Paul Young as well as his assistant Gordon Young on Sunday, one day after losing away at Sutton United. On the same day, Keith Curle was appointed as interim manager, although the former Carlisle United and Oldham Athletic gaffer will miss Tuesday night's fixture. Former United midfielder Anthony Sweeney will take charge.

Hartlepool's most prolific player so far this campaign has been Josh Umerah, who has scored three goals and provided one assist in eight League Two appearances. The 25-year-old is no stranger to goals, having netted 29 times in 120 National League games. Despite his young age, the London-born striker has experience across various leagues, including the Championship, League One and the Scottish Premiership.

Summer arrival Wes McDonald joined the club after leaving Morecambe by mutual consent. The 25-year-old has hit the ground running in the North East, scoring two goals in six League Two matches, and picked up the Man of the Match award on his debut for the club.

Former Shrimps goalkeeper Kyle Letheren arrived at Hartlepool in a duo player/goalkeeper coach role back in June. The Welshman is no stranger to Morecambe fans, players and staff alike, having played a key role in the Club's 2020/21 promotion winning season. The 34-year-old linked up with his former boss Derek Adams at the Club in January 2021 after previously playing under the gaffer at Plymouth Argyle.

Similarly to last month's fixture against Everton U21s, Adams says whilst he may make changes, the ultimate goal is to progress as far as possible in the competition.

He said: “It’s only right we do that because we’ve got a lot of fixtures to play in a short space of time, we’ve got players who want game time and need game time, we’ll do that on Tuesday night.

Having taken charge of six games so far this campaign, four in League Two, one in League One and the other in the Papa John's Trophy, Woods has handed out 19 yellow cards and two red cards.

The referee will be making his Mazuma Stadium debut on Tuesday evening, having never taken charge of the Shrimps before.

After teaming up with Beyond Radio for the 2022/23 season, supporters will be able to listen to exclusive, full and uninterrupted radio commentary of every single game, home and away, which will be broadcast simultaneously on 103.5FM, 107.5FM and DAB+ digital radio across North Lancashire and South Cumbria as well as on the iFollow Shrimps platform.
Dave Salmon will be on hand to provide kick-by-kick coverage, with video passes available through the Club's iFollow service for £10.
Audio passes are available from as little as £2.50 per match, £4.49 for a monthly pass or £45 for a season pass.
As well as full match commentary, the ‘Shrimps Verdict’ podcast will be available post-match, featuring online, on demand content, including audio match highlights, post-match interviews and reaction, and much more!

Morecambe 0-0 Hartlepool United (4-2 on penalties)
Papa John's Trophy
Mazuma Stadium
Tuesday 20 September 2022
Kick-Off: 7:00pm
Attendance: 934 (71 away)
Morecambe won their second Papa John's Trophy penalty shoot-out of the campaign to take the extra point against Hartlepool United after a goalless 90 minutes.
The Shrimps, who made nine changes for the game, could not break down a resolute Hartlepool defence in the 90 minutes but followed up shoot-out wins against Stoke City in the League Cup and Everton in the previous Papa John's game with another set of cool penalties.
The first-half produced few chances, but the Shrimps looked the more likely to score.
Arthur Gnahoua produced the first effort on six minutes with a shot from the edge of the area which produced a fine stop from Ben Killip low to his right.
From there, Dylan Connolly put in a number of quality low crosses, but it took until a few moments before half-time for the next chance to come when Jon Obika volleyed Shane McLoughlin's cross-field ball over at full stretch.
Half-Time: Morecambe 0-0 Hartlepool United.
Hartlepool made three changes at the break which gave them an extra edge going forward.
Mark Shelton twice fired wide from distance before forcing Smith into a fine save just before the hour with another strike from distance.
Ferguson also tested Smith with a free kick fifteen minutes from time before the Shrimps ended the game on top.
Kieran Phillips looked sharp after coming off the bench and raced into the box, his first effort was blocked by Killip and the keeper also reacted sharply to save from Stockton's follow up to take the game to penalties.
Full-Time: Morecambe 0-0 Hartlepool United.
Jensen Weir, Cole Stockton, Ryan Cooney and Donald Love all struck home from 12 yards whilst Shrimps' keeper Adam Smith made two superb saves from Hartlepoool's first two spot kicks to deny Euan Murray and David Ferguson respectively.
Full-Time after penalties: Morecambe 4-2 Hartlepool United.
Morecambe: Smith, Cooney, O'Connor, Bedeau, Gibson (rep Love 64), Fane (rep Weir 79), McLoughlin, Mayor (rep Shaw 63), Connolly, Gnahoua (rep Phillips 78), Obika (rep Stockton 65)
Subs not used: Ripley, Delaney.
Goals: None.
Bookings: Fane 74', Love 90+3'
Red Cards: None.
Hartlepool United: Killip, Niang, Menayese (rep Murray 46), Lacey, Paterson, Taylor (rep Ferguson 46), Sylla, Shelton, Tumilty (rep Sherry 46), Ndjoli (rep Hamilton 87) Grey (rep Crawford 62)
Subs not used: Letheren, Hastie.
Goals: None.
Bookings: None.
Red Cards: None.

Tickets are on sale for our Papa Johns Trophy fixture against Hartlepool United at the Mazuma Stadium on Tuesday 20 September 2022, 7:00pm KO. 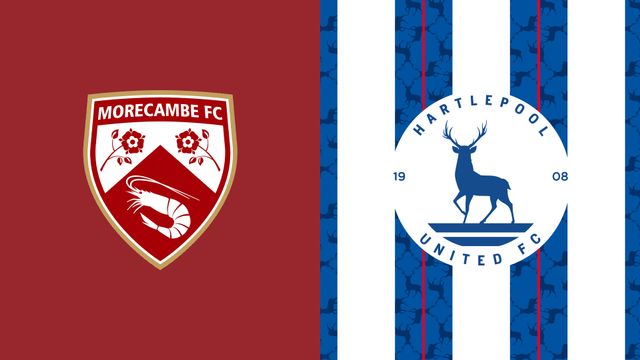 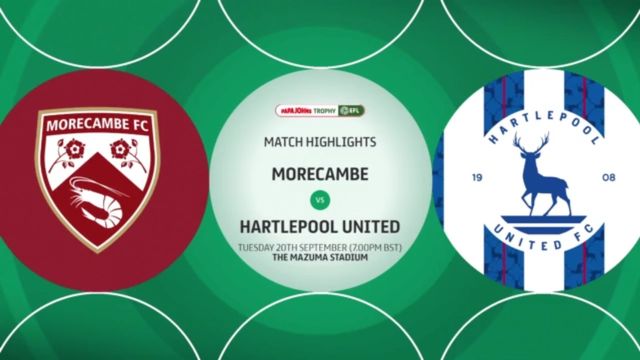 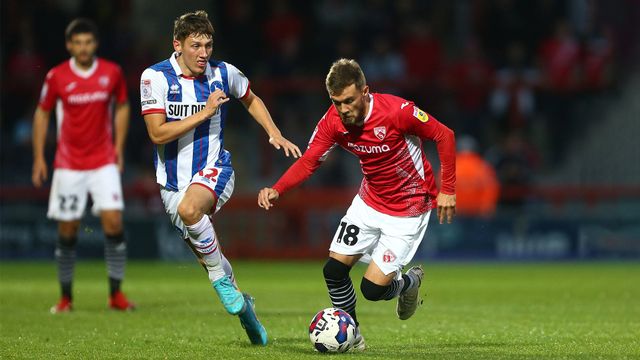