Yes, here we are again with another peek inside the Pandora's box that is the iFollow Shrimps team.

It's still early days in the season and as with all fans we set off in hope and expectation to away fixtures not really having a clue what will happen. Is it more hope than expectation? This evening turned out to be interesting.

We were pulled out of the hat with a tough away fixture in the Carabao Cup, drawn to travel to deepest darkest Yorkshire and another visit in this trophy to Oakwell.

So, as we always do, passports were stamped, visas were checked and the intrepid iFollow three plus the Mighty Quinn set off in my jalopy to tootle along the M62 and the warm welcome from our Barnsley counterparts.

The last time we had made the journey, we returned triumphant after a typically obdurate yet free flowing performance resulting in two goals being scored which took us over the finish line. Lewis Allesandra showing neat touches that night, remember??

So we set off and we're looking forward to what we were sure would be a memorable night.
How right we were?

The banter is flowing as we head across the Pennines, a gloomy August evening is unveiling itself as we pass the sign proudly announcing that this stretch of motorway is the highest in England.

As the road reduces from four to three lanes, I change down from 6th to 5th and start to pull in, there is no sound but a burning smell is emitting from the car and when I press the accelerator, there are plenty of revs but no increase in speed!!!

The clutch has gone!! Aaaaggh.

We manage to limp to the top of the next hill gradually pulling in until we calmly drift onto the hard shoulder.

Traveling all over the country ensures that my AA membership is up to date, so I dial in and am informed that a recovery truck will be with us within the hour, it's 5.55pm.

Now with a match to commentate on, and iFollow and Radio Lancs listeners expecting to hear us, it was imperative that somebody got to Oakwell to report. Quinny could do Lancs and iFollow at a push, so he was nominated to be the Lone Ranger and carry on regardless.

Springing into action, Facebook and Shrimpsvoices were filled with pleas for any fans travelling with spare room to look out for us forlornly on the hard shoulder with our thumbs out.

A minibus with hardy Shrimps types replied saying they had just gone past junction 23 eastbound, where were we? Erm between 22 and 23, they were ahead of us!!

Then, a glimmer of hope. Three young men were on their way and just getting on the M62 at Oldham, contact established, they arrived at 6.40, and we decanted Quinny into their spacious Ford Ka and off he went. Thanks guys, lifesavers. The power of the web can be useful sometimes.

It was by now seriously raining, and having sat in the car for a while but all of us being spooked by the giant pantechnicons rushing past, the three of us got out and preferred getting wet to dying, we stood cheerfully munching digestives ( emergency stocks in the boot, how lucky??) by the side of the motorway.

A white Audi pulled up behind us, we were all asking who it was and what they wanted as the driver rooted around in his boot, producing two brand new golf umbrellas which he donated to us, what a gentleman, again, thanks whoever you are, for that random act of kindness. 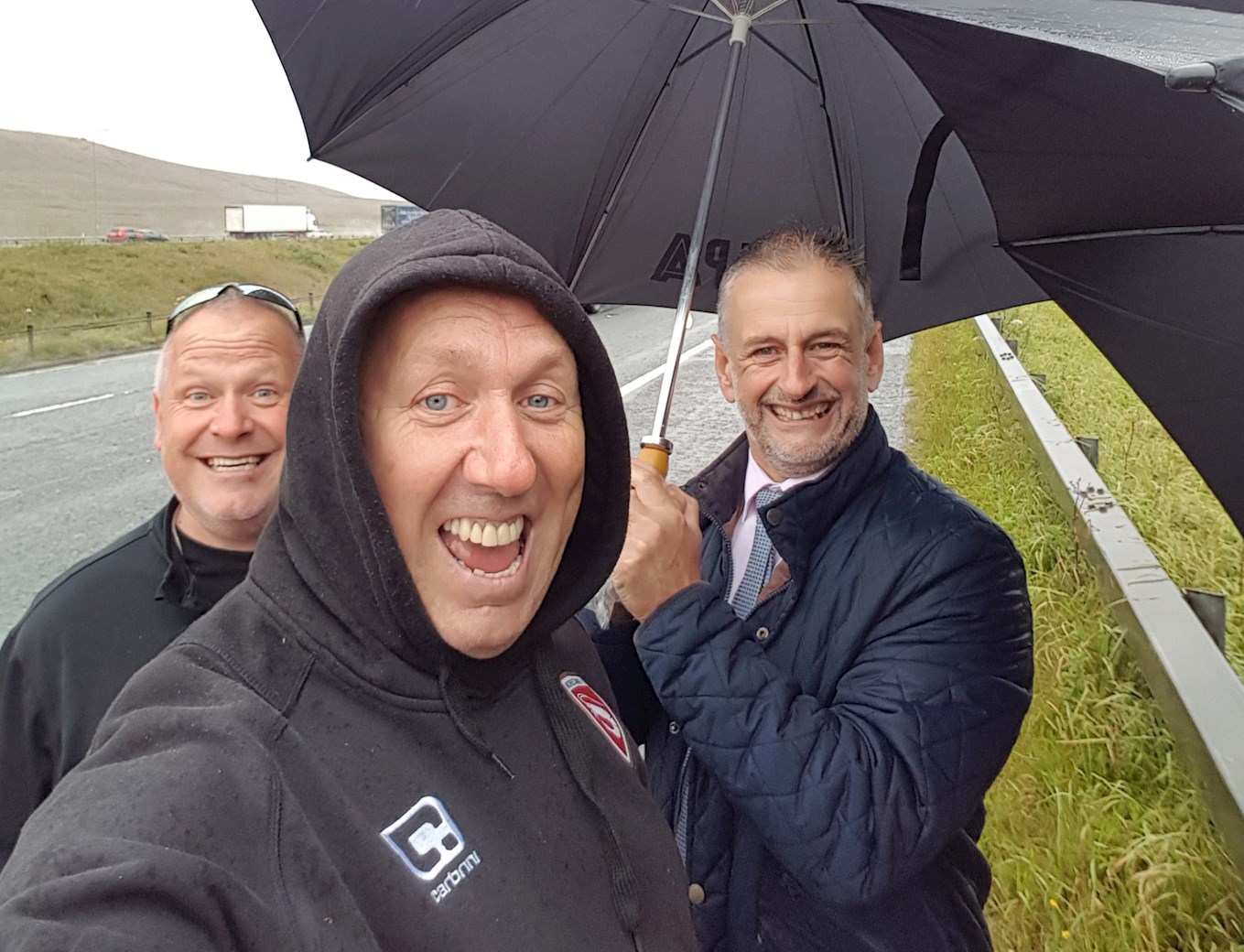 At 6.50pm, so within the hour, a recovery vehicle arrives, it isn't the AA, but he's taking us off the motorway. He loads the car on the flatbed and we drizzly three jump into the truck. This young man is taking us off the motorway to the next junction, dropping us and the car off at a car park near a pub to await collection from another AA flatbed who will take us home.

So, no football, but a pub, some tea and a beer and hopefully a TV to watch Sky?? Could be worse!

I ring my wife, gutted as car not well, as Swidz and Downsy leap out of the truck asking what I want from the bar when I come in the pub.

I'm only half way through explaining what's happened when they jump back in the truck, looking despondent, pub is closed Tuesday nights!!!

It's still chucking it down, and it's now looking blacker than a referees undies out there.

The car is unloaded, paperwork signed, we are left sat in the dead car as our first knight in shining flatbed drives off. Just waiting for the AA now.

Swidz, ever determined, starts googling for take aways. We are on the outskirts of Huddersfield and it's pretty quiet and bleak, but a chippy appears to be ten minutes walk away, so we cheerfully dial it in the map on his mobile and pull our collars up against the driving rain and set off to get some tea.

Swidz has the phone in his hand, we walk perhaps two hundred yards in the right direction before the phone announces, in that CG (computer generated) female type voice, "THIS TAKEAWAY IS CLOSED TUESDAYS", Aaaagh!

So we sit back in the car, it starts to steam up, so I wind a window down, electrically. As I do so the battery dies, as we have had the hazards on with full lights for an hour so we don't get run over on the hard shoulder. So now the window is open, it's raining, we are cold, wet miserable and out of luck. The mood is heavier.

Resourceful Swidz googles another pub, ten minutes walk away, surely this won't let us down??

So off we trudge, arriving just as the kick off time approaches, wet, but unbowed. Now I fancied a pint as I wasn't driving for obvious reasons, but both of my colleagues cars were at The Phantom Winger in Preston, and as we were now suffering from hypothermia in August, they opted for a tea and coffee each.

A little shop next door gives up its supply of pies and sarnies and we settle down in from of a big screen TV in the virtually empty Waggon n Horses to catch up with the nights action.

Goal down after no time at all.

Two down, time is ticking, no sign of the AA. Gloomy is the word again.

Another round is purchased and crisps are now in order. Then Barnsley make it 3-1 and a call comes in, AA man, on his way, he'll pick us up from the pub in twenty minutes.

9.20pm and the AA man arrives outside the pub. In a Transit. Now, call me cynical, but three of us and a broken car are not going to fit in the back of a transit. I climb in and we drive down the hill to the car, leaving the boys watching Sky Sports news. He's just come to see what's wrong with it and if see if he can get it going, he says!! I sigh, the clutch has gone, I told them this when I rang through at 5.50pm??

The battery is now dead, so we cannot get it started for a time until he's put charge into it, but eventually after half an hour under the bonnet, he concludes the clutch has gone!!

A flatbed is on its way, at last.

The AA man then kindly drives up the hill to pick up a Swids and Downsy from the pub.

They arrive back shortly, gutted, telling me we lost 4-3 in injury time! EH? I left us 3-1 down and all hope gone, what happened?

Rosie pen and then Oliver equaliser in the last minute but then the Tykes nicked it in the 93rd minute!

10.05pm another non AA flatbed truck arrives, informs us he is taking us to Birch services, which is 15 miles away!! There another flatbed will take us home?? Apparently he has been driving since 8am this morning so cannot take us all the way...AAAGGHH.

We arrive at Birch at 10.40pm, get decanted onto the car park, and drift into the services for a brew.

We are still only 10 miles from where we broke down and it's now heading towards midnight. A few Shrimps fans drift in on there way home, recounting tales of the game, we nod disconsolately, we are losing the will to live now.

Numerous calls to the AA later, with broken promises and taxi style "he's just turning your corner" later, the AA flatbed arrives at 12.40am. Only nearly seven hours after we broke down and just ten miles away from where the clutch went!! Swidz and Downsy are at work tomorrow morning, or this morning as it now is.

We get loaded up and set off, it's still lashing it down, joy.

At 2.05am we role into Preston, drop Downsy off at the Winger, who scoots home, Swidz very kindly gets in his car and follows the AA man and myself to the garage where we are dropping the car off near Plungy Rd in Preston. We have to get the car off the truck round the corner as the flatbed cannot get to the garage through inconsiderate pavement parking. So three of us push the car in the rain to the garage.

Swidz then drives us home as the AA man departs

We arrive back in Heysham at 2.46am, having broken down at 5.50pm seventy miles from home, having missed the game and dealt with four breakdown men, three flatbeds, a transit , two pubs, a services and a shop!!
And we lost.

My wife says we must be mad? She's right.

To be fair in over 30 years of following the Shrimps that's the first major failure due to cars that I've encountered, so deal with it and move on. However the four gents that came to our rescue were all accommodating and helpful, but the logistics team at AA need to look at how they dealt with this breakdown. I understand they give priority to lone women and family's, but 9 hours to get us home? We could probably have walked it quicker! An email has been sent to the Automobile Association, they are investigating apparently?

As we parted on the morning, the question was asked "Whose up for Lincoln on Saturday?" but that's another story!