Sam Lavelle has spoken of the experience gained during his debut season in professional football.

The 21-year-old signed a one-year-deal with the Shrimps after a successful trial period during pre-season and has since gone on to become a valuable squad member of the Shrimps' camp.

Looking back Lavelle said: “When I came in during pre-season I was a bit disillusioned with football. I was actually considering calling it a day because I didn’t have the best time at Bolton or Blackburn but when I came to Morecambe I quickly realised it was a good opportunity and although I don’t think I did particularly well in my trial, the gaffer saw enough to sign me so I was a bit relieved.”

With Jim Bentley short of central defenders in the opening stages of the season the inexperienced then 20-year-old who was yet to make a senior appearance made his first competitive start at Championship side Barnsley in the EFL Cup in a back three alongside Alex Kenyon and Mitchell Lund.

Lavelle said: “I got a couple starts early on. Deano was injured and Oldy wasn’t here yet so I played away at Barnsley and Lincoln but I wasn’t quite ready for it and the gaffer was right to take me out because I wasn’t experienced enough. Those two games were my first taste of men's football and although I did okay, I wasn’t really ready for it.

“I ended up doing a couple months training with the first team and spending the time in that environment helped me a lot so when I got into the side again I felt a lot more prepared. The physicality was so different to what I was used to and when to use your body is massively different at this level, certainly in my position.”

Lavelle would go on to wait three months before his next league start. An opportunity arose as Dean Winnard was out with his achilles injury and Max Müller was ineligible to play against his parent club.

“I got back in the team to play Wycombe at home in November and thought I did well and I felt a lot more comfortable with it. I’ve played 18 of the 22 games since then which has been great, I’ve enjoyed it. 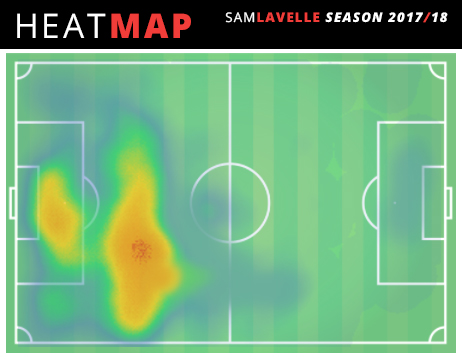 “I’ve mostly played with Steven Old and he’s very experienced at various levels so he’s helped me a lot along the way with bits of advice. Not just technical stuff but mental as well, I’ve learned a lot from him.

"Then Deano with his experience at this level and his intensity (laughs). He’s been in this league for a number of years now so he knows what it’s all about and knows a lot about the opposition players. He has good advice on how to deal with certain forwards.

“There are some big names in this league that you come up against and I relish the chance to play against the likes of Adebayo Akinfenwa and Danny Hylton, that’s what develops you, playing against the best players.”

The Shrimps have conceded 48 goals in the league this season, 10 less than at this stage last year and with eight games left Lavelle believes Morecambe can finish the season strongly.

“We’ve been pretty solid certainly since the turn of the year,’’ he said. "Not just as a back three or four but the whole team’s done well. We’re hard to break down, hard to beat and with a few more goals I think we could do really well.

“We’ve only lost one in nine which was against Accrington who are on a bit of a roll at the moment so our form’s decent. I think we’ll naturally win a couple games between now and the end of the season and once the pressure is off we can enjoy it and hopefully finish strong.”