The Shrimps host 6th placed Exeter City at the Globe Arena on Saturday afternoon in the first of 3 consecutive home league fixtures.

The well earned point sees the promotion hopefuls extend their unbeaten run to 4 matches, taking an average of 2 points per game since their home defeat to Mansfield Town last month.

Jim Bentley’s side dropped a position in the league table midweek after Port Vale earned a point at Barnet on Tuesday night to climb from 22nd to 18th.

The Shrimps remain 6 points above Barnet and Chesterfield and 3 points could see them climb as high as 17th on Saturday afternoon.

With only 1 defeat in 5 matches, Morecambe go into the game in decent form and will be looking to bounce back from the stoppage time equaliser at Crawley last week.

Shrimps’ management duo Jim Bentley and Ken McKenna travelled south on Tuesday to watch Paul Tisdale’s side face Yeovil Town and the Morecambe Manager said; “It was a close encounter, Exeter could have won the game but could have lost it too.

“Stockley’s the main threat for them with his size and aerial presence. They have a mixed style of play, over the years Exeter have been known to be a footballing side but this season with their pitch being the way it is they’re going more direct up to Stockley and a lot goes through him.

“They do have good players, a good blend of youth and experience. We’re looking forward to it. They’re under pressure to take something from the game while they chase promotion and we’re also under pressure to get back to winning ways ourselves.”

Steven Old has an outside chance of returning to Jim Bentley’s side after missing out at Crawley due to a knee injury sustained versus Accrington Stanley Last week. With 3 games coming up throughout the week Jim Bentley may opt to shuffle the pack, particularly in the forward areas where the Morecambe has options available.

Exeter captain Jordan Moore-Taylor was replaced due to a knee injury early in their SkyBet League 2 clash with Carlisle United and will be unlikely to return. Paul Tisdale has mixed things up with various formations but all favour Jayden Stockley down the middle with Lee Holmes and Jake Taylor operating down the wings. 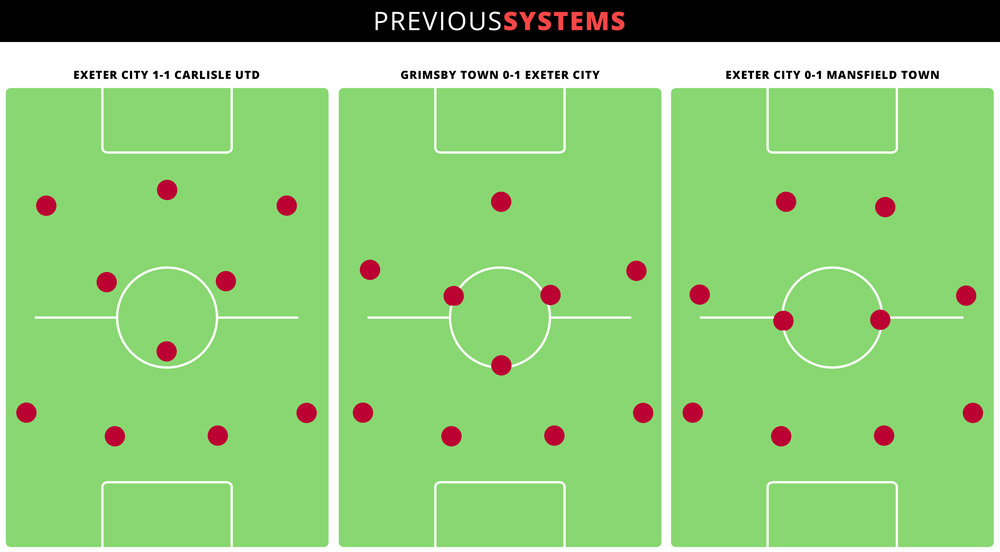