Morecambe Football Club Academy has announced their return to the Isle of Man this summer; to offer a week-long Soccer Camp for young Manx footballers.

The Shrimps made two visits to the island in 2018 and both camps were a sell-out success.

The coaching programme is for youngsters aged 6-14 years and runs from 29th July – 2nd August, at the home of Ramsey Youth Centre and Old Boys FC.

The coaches will help players develop their skills, with a programme focussing on technical and tactical aspects of the game.  The sessions are designed for boys and girls of all abilities and will be delivered by UEFA and FA qualified staff from the Academy.

Morecambe hope to scout talented players from local clubs during their visit and have previously invited Manx players to attend trials in England.  Morecambe hope that for the best talent, they can offer a possible pathway into the Academy and ultimately a scholarship with the Club.

Morecambe’s Head of Youth, Stewart Drummond said, “It’s great to be coming back to the Isle of Man.  We’ve received a warm welcome from our hosts on previous visits and I’m sure this time it will be the same.

“There is a great enthusiasm for sport on the Isle of Man and we’ve found Manx footballers to be hard working and willing to learn.

“As an academy, we’ve done a lot of work in the last few years to extend our player recruitment network and look far and wide in the search for talent.  We’ve built up good contacts on the Isle of Man and been able to invite some players over to trial with us.  That is definitely something we want to build upon, whilst at the same time providing a fun week for all those who love the game.”

Academy coaches will travel to the island in late July, courtesy of the Isle of Man Steam Packet Company; who are sponsoring return travel from England for the trip.

“These camps provide opportunities for young local footballers to benefit from qualified coaching and, who knows, maybe pursue a pathway to a scholarship with the club’s Academy.

“I am sure it will be another rewarding experience for all concerned.”

Support has also been provided by Athol Car Hire, who will be providing a vehicle for the Morecambe coaches during their stay.

For more information and to book a place at the Soccer Camp, visit: www.morecambefc.com/soccercamps 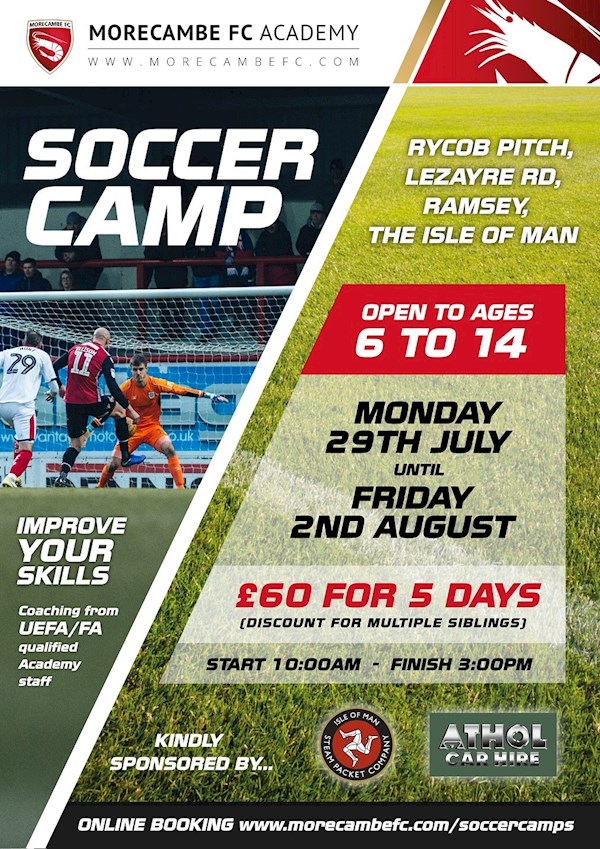