Over the Centenary year we will look back at interviews with some of the players and officials who have represented the club over the years. Here we kick off the series with an interview with Keith Galley (pictured: second from left, front row) taken from Derek Quinn’s Book “Sunset Over Christie Park.''

"It all started for me at Morecambe in 1973 and I first managed to get into the first team after Alan Taylor left to join Rochdale before his move to West Ham.

"I did pretty well in that spell including being involved in the memorable FA Trophy win over Dartford at Wembley in 1974. It was a great day and I remember the whole party going out on the Friday and seeing Cliff Richard in concert and meeting him afterwards and training near to our hotel in Hyde Park on the Saturday.

"I had played a few games in the Trophy run but was only named as substitute for the game itself. I was obviously disappointed to lose my place on the day but Mal Richmond came in and scored one of our goals so in the end it was probably a good decision by the manger David Roberts. I did manage to get 25 minutes though and I always remember that because to say I have played at Wembley is something special. 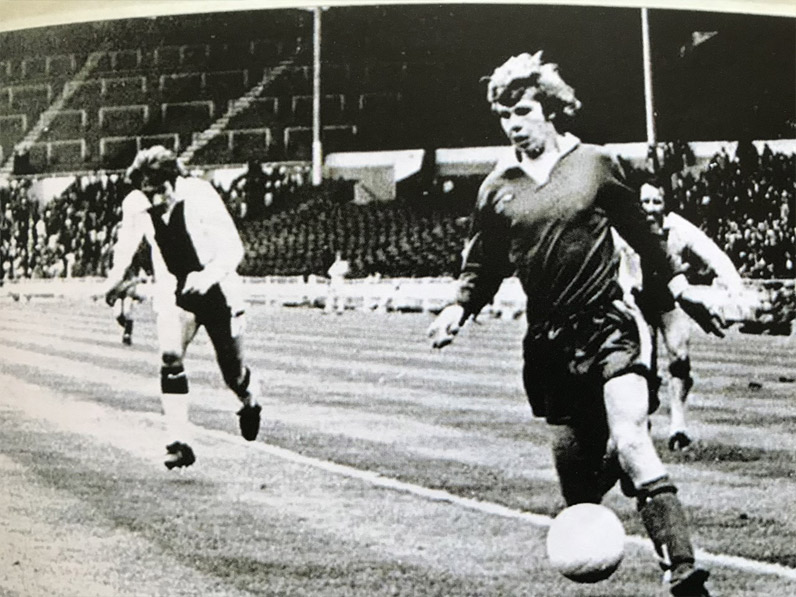 Above: Keith Galley in action in the FA Trophy victory over Dartford at Wembley in 1974

"I did pretty well for Morecambe and I got a move into the Football League when Southport came in for me. They paid £2,500 for me as well which seemed a lot of money in those days. But things didn’t really go to plan there and I came back to Morecambe when Mick Hogarth was manager before leaving again and joining Netherfield. I wasn’t away for long however and I returned for a third spell when Les Rigby brought me here for a club record fee of £400 which doesn’t sound a lot now does it?

"Les was a real character but he didn’t have a lot of success at Christie Park and when he left things started to improve for the club. Joe Wojciechowicz took over and that sparked a really good time. He brought some great players to the club like Steve Brooks, Kenny Gordon and Graham Gill and in three years we had a lot of success including one of my most memorable games for the club in the Lancashire Cup final when we beat Chorley at Deepdale. We were 2-1 down with only a few moments to go but we equalised with almost the last kick of the game and I scored the winner in extra time. It was a cracking game and a great atmosphere and to bag the winner in such a game was a special moment.

"When Joe left to go to Colne Dynamos Bryan Griffiths joined and the success continued although I was coming to the end of my career at that level and left in 1990 when John Coleman came into the club and went on to have a wonderful career at Christie Park.