The Shrimps travel to Sky Bet Championship side Blackburn Rovers in the Carabao Cup first round.

The first of this season’s cup campaigns gets underway on Tuesday 10 August as Stephen Robinson’s side make the short journey across to East Lancashire to face Blackburn Rovers at Ewood Park.

The Shrimps enter the match filled with confidence following on from Saturday’s opening day draw away at promotion favourites Ipswich Town, and the West Lancashire side will be hoping to replicate last season’s cup success.

The two sides have never met in a competitive match and the only meeting between the clubs came in a pre-season friendly in 2016 at the Mazuma Stadium which ended in a 0-0 draw.

Below is everything supporters need to know ahead of Tuesday’s Lancashire derby.

Despite a below-par campaign from Tony Mowbray’s men, the Ewood Park club finished last season without a loss in their final three games, picking up two 5-2 wins in the process.

Pre-season produced a mixed bag of results for Rovers, with a win against AFC Fylde, two draws against Leeds United and Bolton Wanderers respectively and a loss away to Derek Adams’ Bradford City.

An opening day victory at home to last season’s Play-Off finalists, Swansea City, will ensure Mowbray’s side are headed into this fixture with bags of belief, but if the Shrimps apply themselves the way they did at Portman Road on Saturday, it won’t be an easy affair for the hosts by any stretch of the imagination.

The Blackburn Rovers chief believes that, as a result of Morecambe’s strong performance at Ipswich, there’s no need to significant changes to his starting XI.

Speaking to the official Rovers website, he said: “We won’t be making wholesale changes because Morecambe are a team of strong, professional athletes.

“They are coached very well by their manager, Stephen Robinson.

“We’ll put out a strong team to try and get through to the next round of the competition.

“For us, we will be trying to beat Morecambe, will make appropriate changes and look to try and continue the momentum from the weekend to move forward.”

Mowbray has been a manager since 2002, and has enjoyed spells at the likes of Celtic, Middlesbrough and West Bromwich Albion before taking the Ewood Park hot seat in 2017.

Since his arrival in East Lancashire, Mowbray managed to steer the blue and whites to promotion out of Sky Bet League One at the first time of asking and has kept the club in the Championship ever since, and the 57-year-old is expecting a tough test from the Shrimps.

“Morecambe are a team with momentum, with promotion on their CV and with a team that went to Ipswich Town, in front of over 20,000 supporters, and earned a 2-2 draw," he added.

“They’ll come to Ewood in a confident mood.

“I watched their game from the weekend this morning and we have to be very mindful of their team with their speed and then strength.”

Rovers have done well to keep hold of a number of key players from last season, as well as adding one or two solid players.

One of the most exciting players within the opposition ranks at the minute is Adam Armstrong and following on from an incredible 2020/21 campaign that saw the forward score 29 goals in 43 appearances in all competitions, it comes as no surprise that the former Newcastle United man has generated interest from several Premier league sides.

One player who really made his mark last year is Ben Brereton Diaz, making 43 appearances and scoring 7 goals in all competition, before deservedly being called up to the Chilean national team for the summer’s Copa America. Not only is Brereton quickly becoming a fans favourite, his cult hero status amongst Rovers and Chile fans respectively sets up for an exciting season.

Blackburn’s 2020/21 Player of the Season was goalkeeper Thomas Kaminski after the Belgian shot stopper impressed in his first year at the club after signing on the back of a year with Gent. Despite a challenging campaign, the 28-year-old produced 10 clean sheets and has become an international regular for his native country Belgium. Boasting a number of attributes you’d expect from a top class keeper, Kaminski won’t make it easy for any opposition when he’s between the sticks.

A successful cup run is nothing new to Morecambe boss Stephen Robinson, who guided former club Motherwell to both of Scotland’s domestic cup finals in the 2017/18 season.

Despite a tougher route to the final, Robinson is keen to succeed in both cup competitions with the Shrimps. 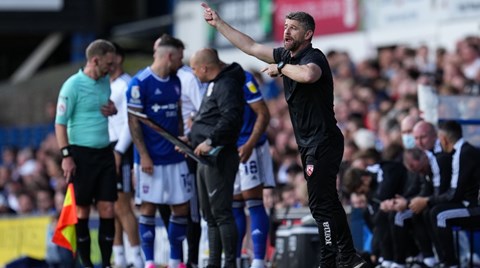 “It would be great, we got to two cup finals so It’s decent omens!” Robinson said.

“First and foremost, we just have to be competitive against Blackburn and make sure we try and take the game to them, possibly a little bit more than we did against Ipswich, take all the good points from that game and learn from the things we can do better from.

“The difference is there’s a long way to go to win cup competitions here, I think of maybe four or five rounds in Scotland before you get to the cup final, there’s a lot of hurdles to overcome and the first one being Blackburn.”

Experienced referee Stephen Martin will take charge of the fixture, with David Avent and Mark Dwyer running the lines and Aaron Jackson as fourth official.

Martin, who started refereeing in 2002, hails from a family of officials, with his father and grandfather both officiating in the Football League.

Last season, Martin took charge of 30 games across all division in the EFL as well as in the Carabao and FA Cup, and in those games, he issued a total of 68 yellow cards and three red cards.

Joining host Dave Salmon on the press deck for the Carabao Cup first round is the club’s media assistant Matt Smith, audio passes are available from as little as £2.50 per match, £4.49 for a monthly pass or £45 for a season pass.