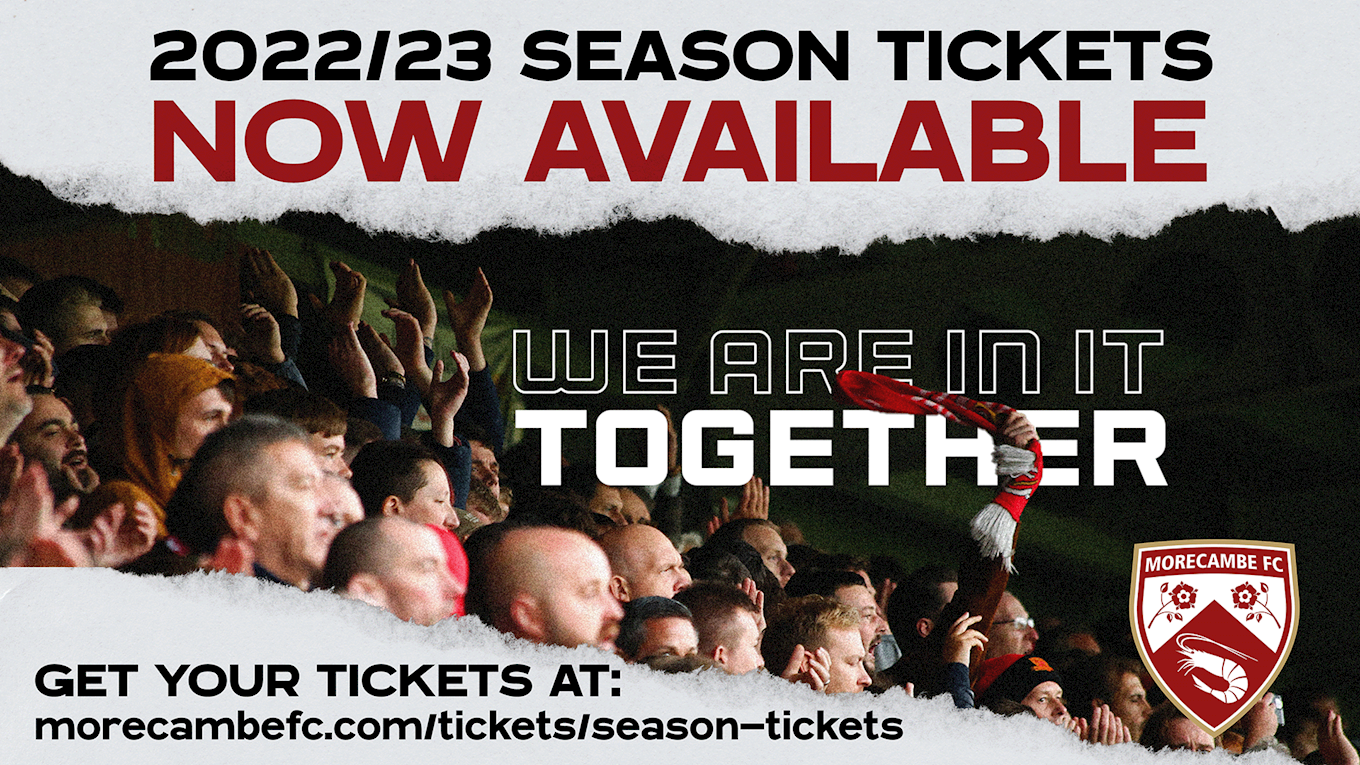 Following on from last season's hugely successful initiative to make live football at the Mazuma Stadium more affordable to a greater number of people than ever before, we are delighted to confirm that 2022/23 Season Tickets are now on sale.

We will be using the same principle as we did for our 2021/22 Season Ticket campaign – whereby the more we sell – the lower the price you will pay for your Season Ticket – so spread the word.

We need you to tell your family, friends, workmates, neighbours, and anyone you meet in the whole North Lancashire and South Cumbria area that the Mazuma Stadium is the place to be on matchdays.

The more people that get involved the better the deal for everyone, in what again has the potential to be the best collective bargain in the whole of football.

As per the 2021/22 season, you will initially be charged the lowest price (i.e. as if we have surpassed our highest sales targets), and only in the case that we should we fall short of any of these targets, you will be contacted by the Club to pay any remaining balance prior to the opening fixture of the 2022/23 season. Again, in line with last years campaign, the number of Season Tickets sold will be split into Standing and Seating, with the sales targets and prices running independent of each other. For reference, in 2021-22, we sold 1,626 Standing and 935 Seated tickets.

We are committed to ensuring that we have the best value season tickets in the whole of football, therefore the majority of prices have been frozen, with the only exception being the accompanied U14 child tickets.

Current Season Ticket holders will notice that the price for accompanied U14 child tickets has increased, but this is solely to minimise non-attending junior season ticket holders, particularly in the Wright & Lord Stand, which now regularly sells out well in advance of matchdays.

With just 30 per cent of junior tickets being used on a regular basis in the current season, and consistent feedback from Mazuma Stadium regulars about unused seats, this issue needs to be resolved and the increase in price is therefore necessary.

At around £3 per game for a seated ticket & around £2 for standing, we feel the new price still represents outstanding value for those attending regularly. In addition to this, and to improve the overall package, all U14 Season Ticket holders will also receive an exclusive Morecambe FC x The Terrace t-shirt & bag along with an invite to our new Junior Season Ticket holder events across the season.

Due to our commitment to safeguarding children, we will not permit entry to any person under the age of 14 who is unaccompanied. As a result, Under 14’s Season Tickets can only be purchased with an over 18 Season Ticket, who must act as their responsible adult.

Prices at the different levels of demand will be as follows:

Current Seated Season Ticket holders will have until Wednesday 1 June 2022 to reserve your seat prior to these being released on general sale. (Please be aware that to maximise seat occupancy we may request that some fans move one seat to the left or right in order not to leave single seats available).

As a reminder, the majority of Season Ticket prices for 2022/23 will not be increasing as many supporters feel the general cost of living increases. Instead, we want to maintain prices based on how many Season Tickets are sold, with the aim of holding the title of best value Season Ticket in the whole of the EFL, if we reach our target.

C Prem Season Tickets will again cost a flat £420 across all age groups, because they include suite access.

Season Tickets can be bought in person from 10am on Monday 11 April, and the Shop will be open from 10am to 5pm each weekday (Monday to Friday). They can also be bought online 24/7 via our website here.

We will be issuing ongoing updates with regards to the number of Season Tickets sold, as we move towards (and past!) our targets. This season, the cut off for our price lock in will be Friday 22 July 2022 at 5pm.

The Club would like to thank our supporters for the overwhelming response to the 2021/22 season and hope you join us again for the 2022/23 campaign!

Further information regarding delivery and/or collection of your Season Tickets will be communicated in due course.

If you have any questions or issues buying your Season Ticket, we are more than happy to help! Contact tickets@morecambefc.com and we will be able to have a look.