With only 1 defeat in 8 league games Alex Kenyon has admitted that the Shrimps are in a healthy position but Chesterfield’s 3-1 victory over Notts County on Sunday has tightened things up at the bottom of the table.

“We’re in a much healthier position than we were a few weeks ago,” said the 25-year-old.

“Chesterfield winning has tightened things up a bit so it would have been great to beat Lincoln or Colchester, but the Gaffer always says if you can’t win the game, make sure you don’t lose it.

“Hopefully we can get a win or 2 and pull ourselves away from the bottom 2 before we go into the games against the teams around us so we can enjoy it.”

Kenyon signed for the Shrimps after Stockport County’s relegation from the National League in the 2012/13 season and has gone on to become an integral player in Jim Bentley’s squad playing numerous positions across the back line and in midfield.

“Yeah I’ve enjoyed all positions, I just like to play. I’ve really enjoyed playing at the back over the past 2 seasons but it’s up to the gaffer where he plays me. 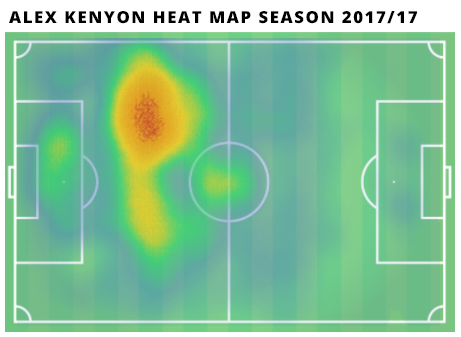 “This is my 5th season now and I’ve been through a lot with the club, the ups and the downs (laughs) and… yeah I feel like each season I play a bit more and become more of a valuable player to the squad. Not necessarily one that’s going to get you a load of goals like baldy over there (nods towards Kevin Ellison) but I do my best in the positions I’m in.

“My first season here was the toughest physically adjusting to the level of football played in the Football League. But mentally this season’s been hard because of the position we’ve been in for the majority of the season. Usually we start better and pick up a few points early doors to give us a bit of a buffer but we’ve been up against it almost from the start this time.

“Thankfully though, we’ve been picking up points more consistently this season to keep up away from the bottom 2.”